A Lazy Day in Toulouse 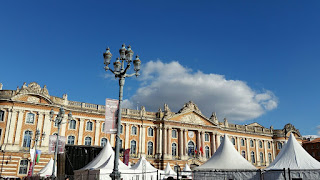 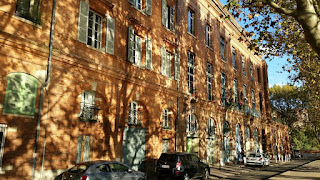 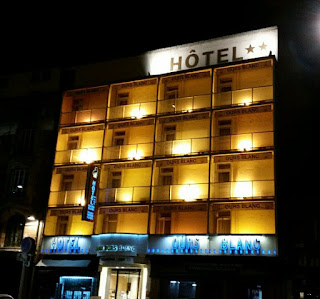 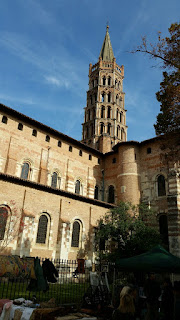 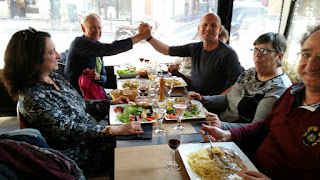 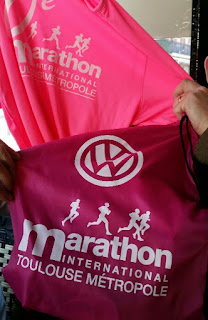 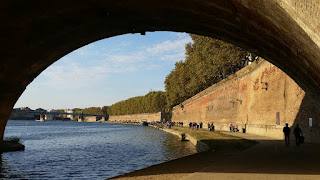 Yesterday brought little contact with others, as Alistair and Laurence, who I was due to meet after they had driven from Geneva, suffered a breakdown en route.

After leaving Julia at 6.30 my only significant interaction was with Graham and Catherine, from Bodmin, on the flight from Bristol. They were good company. I have a good book (The Rosie Effect) but it wasn't opened. I enjoyed your company, G and C, and I hope you had a great weekend. They were considering nipping up to Bagneres on Sunday before flying home. It's great to be able to visit the Pyrenees for a weekend, though personally I prefer a bit longer!

The day had started well with easy traffic and as pleasant an airport as I've encountered. Once in Toulouse I got the shuttle bus and disembarked at a random stop in the big city. I'd forgotten to bring a decent map so I wandered aimlessly. After five minutes I came across the 'Marathon Village' and after another five minutes the Hotel Ours Blanc appeared. It's clean, friendly and convenient -  a good choice.

Having established that I probably wouldn't see Alistair until today, I enjoyed a 7 km stroll, heading along part of the significantly pedestrianised city centre to the Pont St-Pierre over La Garonne, and on to the start of the Marathon route. It's about a half hour stroll from the hotel. Just suitable for warming up tomorrow.

The afternoon sun was beaming down on lots of folk lining the east bank of the river. I joined them for a while.

Sue will understand when I say that finding a place to eat here is the exact opposite of our problem in finding a restaurant in Buenos Aires nearly twelve months ago. Within 400 metres of my hotel are a seemingly infinite number of restaurants, and across the road is a Monop' (like a Spar) shop. The restaurants range from high end to kebab joints. I chose a pizzeria (Pizza Papa) that served me an interesting  chicken and goat's cheese curry pizza and a marvellous trio of pannacotta. (Stop dribbling, Sue.)

Today, after a lie in, I met up with Alistair and Laurence. Alistair and I collected our numbers, timing chips and goodie bags. Mine was very straightforward, but Alistair appeared to have entered the disabled race. That took a while to sort out. He's not disabled, he's my cousin, and he's run in at least 25 marathon races.

We were joined for a lavish lunch by Laurence's brothers, Guy and Didier, and their wives, Monique and Ada. It was a lovely relaxed occasion. Guy very generously treated everyone. Thank you Guy, that was exceedingly generous.

I was invited to return with them to the suburbs (I'll do that tomorrow) but I opted for a quiet evening in the centre. I've been for another stroll for an hour or so and will soon go foraging for a bowl of pasta.

Today's pictures, taken around Toulouse, should be self explanatory.
Posted by Phreerunner at 17:51

You're right - very envious of the pannacotta!

Nothing wrong with being disabled

Nothing wrong. No. Just blatant fraud in Alastair's case!