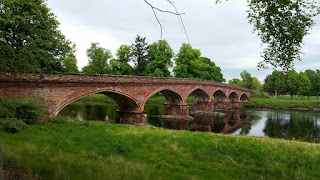 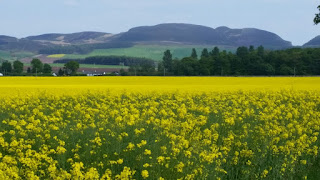 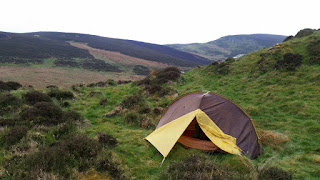 Some local knowledge would have helped today. The Ordnance Survey isn't much good when it comes to Scottish footpaths. Details of paths are available on a website that Alistair Pooler has mastered but which I found so difficult to navigate I gave up on it. The long and short of it was an extra 10 km of road walking. Not a nice road. 5 km was because there is no access across an old railway bridge at Ballathie. So I had to go over main road bridges over the Rivers Tay and Isla instead.

The Bankfoot Inn provided a good breakfast with some chatty Australians. They were very envious of old coaching inns like this one, which retains much of its original ambience.

I got away soon after 9.15 and passed happily under the A9 road whilst conversing with Conrad and Markus. The good path had verges rich with ribwort plantain, bistort and yellowhammers. But it came to an abrupt end when the first 'blockage' occurred at NO 083 350. The pain of my 2.5 km diversion past Stewart Tower was somewhat alleviated by that landmark housing a coffee shop. It was the only such amenity I passed all day, so the coffee and cake was appreciated. By the time I left it was raining.

The next 'blockage' occurred at NO 122 368, where a track to the right simply didn't exist. Pleasant forest tracks delivered me 2.5 km 'out of position' on a busy road.

Soon I was heading for Ballathie, and an old railway bridge that Bernie (my vetter) confirmed would see me across the River Tay. Shortly before the bridge I checked it out with a ghyllie. I was told it was too dangerous to cross - closed after several guests at Ballathie had fallen in! So I opted for the alternative route - instead of 1 km of disused railway, 6 km of busy roads. Perhaps that's what caused my heal to blister and my stomach to churn.

I didn't see much of Ballathie House, but according to Wiki it was built in 1886, and since 1972 it has operated as a country house hotel. There's much more, but apart from the amusing golfing story below, let's just say the place has a rich, in more ways than one, history.

Apparently a 9-hole golf course was laid out here by professional golfer Ben Sayers but this was ploughed up as part of the campaign to provide more food during World War II.

Once off the main road, I passed Sidlaw Grain Store and realised why so many HGV's were rumbling up and down the country lanes.

It started to rain again after a bright spell with good views of the Sidlaw Hills.

After the rather drab village of Collace, my route finally left the tarmac for the last 3 km of today's efforts. A steep grassy path led to a conspicuous summit overlooking a quarry.

Dunsinane Hill is of course mentioned in Shakespeare's play Macbeth. "Macbeth shall never vanquished be, until Great Birnam wood to high Dunsinane hill Shall come against him."

It has the remains of two early forts. This is believed to be the site of a battle where Malcolm Canmore defeated Macbeth in 1054. In reality this was only a limited defeat for Macbeth. He was finally beaten and killed by Malcolm Canmore in 1057, at Lumphannan near Aberdeen.

The correct spelling of the name is Dunsinnan, Gaelic meaning "The hill of ants."; possibly a reference to the large number of people it took to build the fortress.

The impressive ramparts are still very obvious (to some - I wasn't really in the mood to appreciate them!), though the interior was much disturbed in the 19th century by antiquarians attracted to the site by its Shakespearean connection. Little of value was learned about the history of the monument from these unscientific excavations.

Black Hill, at 360 metres, is a little higher, and after a steep descent and ascent I found myself on top of that amongst the acrid smell of recently burnt heather. If it hadn't been raining there were probably good views. But it was decidedly murky so I'll leave those for tomorrow.

As the intensity of the rain increased while I descended to a pond, I found a good spot for the tent beside the broch, with reasonable looking water coming from the outflow of the very weedy pond. The Travel Tap water filter was deployed. There was no sign of Chris Peart, who had planned to be here, so I didn't after all get to meet my third Challenger since Day 1! Never mind.

Later, after further showers the rain has stopped and I'm appreciating the perfect silence and stillness of my last wild camp of this year's Challenge. Despite toothache, a painful shoulder, a blistered heel, weary knees and an upset stomach.

Would I prefer to be with Sue in Newtonmore Hostel?

Today's pictures:
The road bridge over the River Tay where I spent some time mending my heel,
The Sidlaw Hills - I'm pitched around the gap at the far right,
Phreerunner, next to the broch, with Black Hill behind.

(No proper signal so transmission will be delayed.)

Maybe not surprisingly, travel on foot is often harder and more frustrating in a rural setting than out in the wilds I find. A frustrating day.

I should have added 'Well done' in overcoming the trials and tribulations of the day Martin. I hope the remainder of your journey goes smoothly.

Thanks Gibson. Today (Day 12) is very similar to yesterday, with non existent tracks and 'Private' signs. But at least there's not much traffic!

Martin - although of little help to those involved, our thoughts are with the victims, their families and friends and the people of Manchester after last night's barbaric attack.

Thank you Gibson. Our thoughts are also with all involved in this and other such atrocities, this one of course being very close to home.

Well done Martin. An extra 10k or so must have been very frustrating and painful.
Dreadful here in Manchester today, for both those caught up in the concert atrocity and those travelling to and from work.

It still wasn't too long a day Alan. Am in a Travelodge with TV on for the first time this trip. Sad times, but the people of Manchester seem to come out of it with credit.