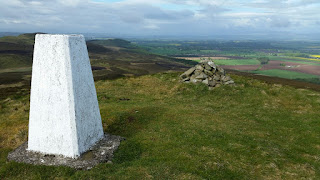 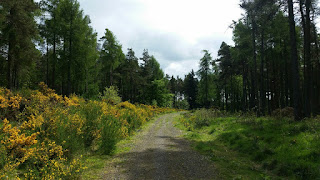 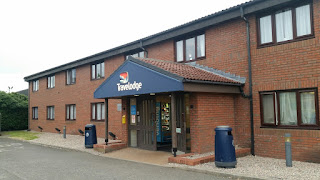 It was a surprisingly comfortable camping spot, given that on arrival in heavy rain last night I just threw the tent up fairly randomly. But the Karrimat soon nestled into a 'perfect fit' position.

After a late storm, the rain stopped and the clouds dissipated, giving the coldest night of the trip. Apart from my tent, my next most important luxury is the RAB 400 sleeping bag. So cold nights are actually cosy nights.

There was no rush to leave, but by 8.45 all that remained of my presence was a dry patch of grass.

The ascent of nearby King's Seat was unexpectedly tedious. King's Seat is one of the principal hills of the Sidlaw range. At 377 metres, it is classified as a Marilyn, and there may be a simple way up to the cairn and trig point. But I don't think people regularly traverse these hills. The heather is, when it's not burnt and acrid, deep and lumpy. So it was a fair old yomp for 35 minutes to reach the summit that wasn't much higher than my starting point at the broch.

Anyway, it was good to be there and admire the expansive views for a while. A distant long bridge across the Tay estuary would grow imperceptibly closer, as would the city, as the day progressed. Birds were twittering after the silence of the night. All except the melodic skylarks were keeping a wary eye on the gliding buzzards.

Looking ahead, there was an array of different shades of green broken by patches of golden yellow gorse and swathes of ugly grey plastic sheeting.

Soon the news of terrorism in Manchester dulled the brightness of the day. Thoughts are with all those involved.

A lumpy descent brought me out at a good path. Hopes of an easier route than yesterday's soon dissipated at an electric fence, a 'Beware of the Bull' sign, and no evidence whatsoever of my planned route beyond NO 234 334. So after mishandling the fence ('ouch') I made my way around the perimeter of some fields, studiously ignoring the bull, to reach Balloleys Farm and access to a road.

Narrow lanes through rolling (hilly?) countryside were happily designated '40 mph, Walking and Cycling Friendly Road', and led past a curious castellated concrete tower. They took me all the way to Littleton, where I rejoined my planned route but was immediately baulked by a 'Private' sign.

So I continued along the road to Little Ballo. Red campion and broom graced the hedgerows, pied wagtails ran along ahead of me, and goldfinches flashed golden in the foliage above.

I was dreading that the path from Little Ballo to Dron would be another no go area requiring a much larger diversion than the 2 km I had suffered so far. But no! A magical signpost announced 'Dron 2+' (I can't find a quarter sign on this keyboard). It was a delightful path, passing walker friendly signs in the Redmyre estate and even a red squirrel hide, a real pleasure, rewarded with good views towards Dundee and a lunch of tinned mackerel on a sward of grass in Dron.

Quiet lanes led to a tree lined footpath bordered by vast swathes of wild garlic between Benvie and Denhead of Gray. Then footpaths led into Dundee, passing an industrial estate and an Asda store before a narrow path beside a wall led to the western entrance of Camperdown Park. The footpath by the road by Liff may have been a better route for that last couple of km.

Once in Camperdown Park it was an easy stroll through the spacious grounds, past the decaying mansion, to a recently built café. I lingered outside there with a pot of tea and a piece of cake before making my way past a children's play area to exit the park a couple of minute's stroll from my accommodation.

Today's pictures should be self explanatory, (the middle one is on the path to Dron) and here's some optional Wiki reading:

Camperdown Country Park, often known as just Camperdown Park, is a public park in the Camperdown area of Dundee. The park comprises the former grounds of Camperdown House, a 19th-century mansion, is "the largest Greek Revival house remaining in Scotland." The park was bought by the city in 1946 and is home to a wildlife centre and recreational facilities. It is the largest park in Dundee, stretching to 400 acres. Over 190 species of tree are found in the park.

The Camperdown estate was originally known as Lundie, and was bought by Alexander Duncan in 1682. A 16th-century house stood on the estate at this time. Several members of the family served as Provost of Dundee during the 18th century. In 1797, during the French Revolutionary Wars, Admiral Adam Duncan (1731–1804) commanded the Royal Navy fleet that defeated the Dutch at the Battle of Camperdown. He was rewarded by being raised to the peerage as Viscount Duncan.
In 1820, his son Robert, 2nd Viscount Duncan, commissioned William Burn to design a new house in the Greek Revival style. The earlier house was demolished, and the new house was completed in 1828. Lord Duncan renamed the house and estate Camperdown in memory of his father's victory, and in 1831 he was created Earl of Camperdown by William IV.

The parklands surrounding the house were laid out by Lord Camperdown, with the assistance of his forester David Taylor, who along with his son planted most of the estate's trees between 1805 and 1859.

After the death of the 4th Earl of Camperdown in 1933, the earldom became extinct, and Camperdown was inherited by a cousin. On her death in 1937, the contents were sold, and the house followed, being bought by the Corporation of Dundee in 1946. Camperdown Country Park officially opened to the public in 1949.

Camperdown is notable in horticulture as the origin of the Camperdown Elm (Ulmus glabra 'Camperdownii'), a short, broad, "weeping" variety of elm.  The tree was discovered in around 1835-1840 by Lord Camperdown's head forester, David Taylor, who noticed a mutant contorted wych elm branch sprawling along the ground. The earl's gardener produced the first Camperdown Elm by grafting it to the trunk of a normal wych elm (Ulmus glabra). Every Camperdown Elm is from a cutting taken from that original tree.

Thanks for the memory of Dundee (and Liff). Enjoy the 'Jute City' and don't forget to check out the statue of Desperate Dan :-)

Yes Nick - the next posting will also interest you...