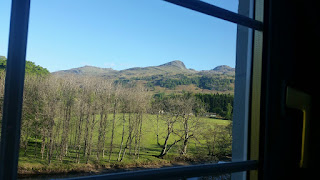 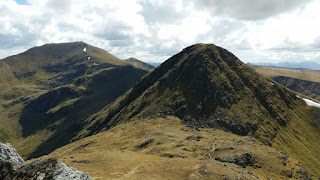 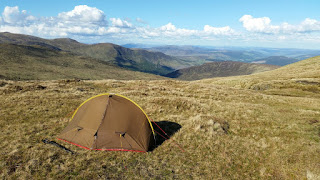 Weather: perfect - sunny and calm but not too hot

What a fabulous mountain day.

Despite a large party of cyclists ordering ahead of us, the Killin Hotel followed up last night's fine meal with a promptly served and we'll cooked breakfast.

I was on the road by 8.45, and was soon passed by Sue as she drove up to the Ben Lawers car park. She was intending to go to a couple of summits then meet me on the way back. It was such a good day though that I tried to encourage her by text message to walk the entire ridge and hitch a lift back to her car.

I'd planned a cross country route to the car park via a track near the top of a pipeline, but it soon became clear that access from below was a problem, at least for anyone lacking local knowledge. So rather than impale myself on a series of barbed wire fences, I chose to walk along the main road. Thankfully there was very little traffic. Much to my surprise, shortly before my turn up the minor road to Ben Lawers, I was accosted by a sign announcing 'coffee shop - open'.

I was the only customer. A pleasant half hour was passed with the lady of the shop, mainly discussing the local wildlife, which is plentiful and varied. The Carpenters music had the edge on my earlier Ken Bruce experience.

The bright yellow VW campervan that had been lovingly restored and the newish state of the art model looked resplendent  (almost to the point of giving me ideas above my station!) as I pointed out the path to their paragliding occupants.

Setting off at 11.15 up the Ben Lawers path saw me passing a few chatty folk and meeting the early morning brigade - the weather was blue sky earlier, now some clouds had arrived but it was still mostly sunny.

I climbed these Munros many years ago, certainly before 1997 when An Stuc was promoted to Munro status - I remember having to go back to the area to climb it. In those days there was a Visitor Centre and the path up Ben Lawers was diabolically eroded and boggy. What a transformation! The visitor centre has gone and the path is now a finely constructed mountain footpath over virtually the entire 10+ km ridge. Well done whoever accomplished that project.

The Ben Lawers ridge now has five Munro summits, the descent from the middle of which, An Stuc, has a reputation for being a little tricky. I could see a group of four ahead of me and a chap I met confirmed that there were two Challengers (no doubt Graham Brookes and Andy Dawkins) the wife of a Challenger (no doubt Sue, following my advice and doing the whole ridge) and an unknown day walker.

This chap also gave me the confidence to stash my walking poles and walk down the tricky descent without incident in the excellent conditions. Thanks to him, and thanks to the unknown walker (Robin) whose wife was conveniently at the end of the ridge to meet him, and gave Sue a lift back to her car. Brilliant. We've done that a few times - what goes round comes round...

Meanwhile, I got to the last summit at five o'clock, spent a while there enjoying the views and the ambience, then descended for fifteen minutes to this lovely location.

It's a short day tomorrow so I can have a lie in, but today's walk was rather easier than expected thanks to the excellent paths.

On the map it looks like a good high camp spot!