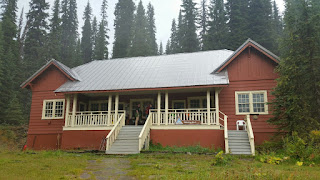 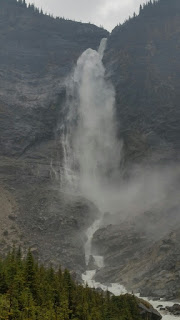 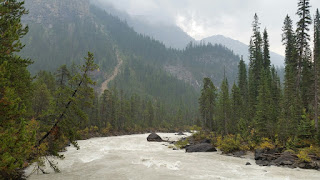 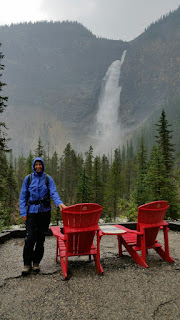 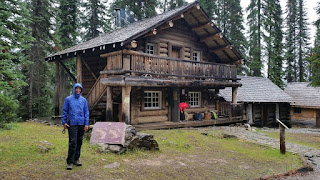 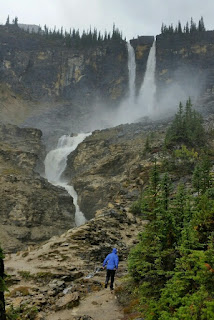 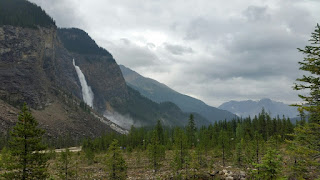 We had encountered just three bursts of rain in five weeks until last night. After going to bed we could see flashes of lightning and hear booms of thunder before rain slashed the windows for much of the night.

Views were extremely limited today. For once we'll put that down to the weather and give the smoke the benefit of doubt. We are just lucky to have arrived at the haven called Fireweed Hostel, a home from home after ten nights in the tent. The campsite at Banff had no cooking shelters, so life there would have been a bit grim. Food in tents is an absolute no no.

A slow start found us chatting to two interesting Polish ladies. Aneta lives in Ontario and is studying for a PhD in environmental sciences. Her old friend Ela is over from Poland to help Aneta celebrate her fortieth birthday. She works as a historian researching 19th century newspapers and is also interested in the history of Japanese medicine.

We gave them a lift up the Yoho Valley Road to Takakkaw Falls, where they will camp tonight. They were most grateful as this saved them a 17 km uphill road walk in the rain with Very Heavy rucksacks. On the way we passed six or seven elks by the roadside.

The original target was a youth hostel, pictured top, where the ladies are booked in tomorrow. It would have been helpful for them to stay there tonight but despite it being the end of the season, with views limited by smoke, everything apart from some campsites seems to be fully booked. This was no exception.

Takakkaw Falls, fed by Daly Glacier, are 254 metres high. Pretty spectacular - see second picture. A boiling river (third picture) had to be crossed to reach a close viewpoint, but many people just make do with the excellent view from the red chairs (fourth picture).

Despite the rain, Sue and I decided to hike about 9 km in the rain up to Twin Falls, via a number of other waterfalls that I'll save the tedium of naming. The camera didn't come out much anyway due to the rain. There were a few people about but it was far from crowded, and the wildlife was certainly sheltering.

Just near Twin Falls there's a cabin that was built by the Canadian Pacific Railway in 1905 and has been added to over the years. It operates as a teahouse in the summer season, which is apparently now over. They were closed and in the process of tidying up before locking up for the winter. It's pictured, above the picture of nearby Twin Falls. We were allowed to eat our lunch on the verandah under the eaves. No tea was offered.

We had risen about 300 metres up the valley, on a walk designed to keep us out of the cloud that would have been encountered on our original plan. We had no proper map but the idea of a circuit (more a sort of lolipop) appealed. We regretted this, as after we had passed Marpole Lake on our 'circuit' our expected descent turned into a 200 metre ascent for a good kilometre across a very gnarly rockfield.

After that we took a wrong turn down an unmaintained path. After dodging various obstacles we turned back, dodged them again, and eventually found the correct path. This mini adventure just delayed us a bit. The rain eventually took a short break and the bottom picture taken back near the second highest falls in Canada shows that the atmosphere has cleared a bit.

Dinner at The Sidings café/bar was adequate but not inspiring. Then we sorted out gear and food for the next three days. We are going in to Lake O'Hara for three nights. There will definitely be no phone signal or internet so you won't hear from us until Thursday morning. This is an area that has to be pre-booked, with great difficulty, three months in advance. Sue spent hours on the phone trying to make the booking. I would have given up. We have to leave the car at a road head and get a bus into Lake O'Hara at 10.30 in the morning. It should be something of a wilderness experience, albeit strictly controlled and always fully booked.

My fingers are crossed that you like Lake O 'Hara as much as we did! I hope the weather is kind to you there.

Yes Lucy, we had a great trip to O'Hara. Some pictures will follow. Thanks for suggesting that we make the effort to book it.