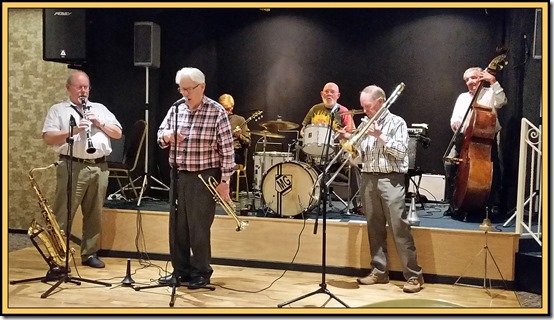 Sue and I were privileged to attend the final performance of this legendary Trad Jazz band, at Eagley Jazz Club last night.

They gave a great couple of hours of entertainment with a variety of Trad and Swing era numbers, rich in vocals, with an oddity or two such as the ‘Oatcakes’ song. Apparently Pottery oatcakes (that’s oatcakes made in the Potteries, not actual ceramic oatcakes) are thin, and tasty with butter and cheese, as opposed to the Scottish variety that are best used as a floor covering substitute for linoleum. There was a memorable drum solo from Moe Green that if the audience had been a bit younger may have generated a standing ovation!

Tonight’s six band members are pictured above. It was a great evening. Thanks lads. And also good to see club stalwart Reg K looking well after his cataract operations.

Luckily, most of the band members play in other bands that appear at the club, so we will see them again.

I don’t know how long the Band’s website will remain ‘live’, so I’ve taken the liberty of reproducing some of the content below in an effort to retain it here. This link will take you to the full version that contains details of the band’s CD releases. Jazz from Basin Street to Broadway

Mike Pembroke writes, "I wish to inform that the final appearance of the Old Fashioned Love Band will take place next Monday October 2nd 2017 at Dunscar Conservative Club (Eagley jazz club). For this farewell performance we will be joined by Mel Hill, our trumpet player for at least 12 of the 15 years that the band has existed, and who, along with Jake Reeves was a member of the previous 1960s OFL incarnation. I would just like to thank all those who have supported us during a very happy period. This obviously includes promoters, festival organisers, and particularly the fans who attended sessions and those have just bought our CDs both in the UK and other parts of the world".

When Stockport based trombonist Mike Pembroke joined 5 Potteries musicians for a "one-off" gig in the Spring of 2002, the evening was such a success that we all agreed that it should be replicated. Too lazy to think up a name, we resurrected the Old Fashioned Love Band, a successful Stoke on Trent group of the 1960s that had featured several of us at that time. Initially we took our repertoire from the Bunk Johnson, George Lewis, Ken Colyer bands but, and it was probably inevitable with the varied backgrounds and experience on hand, that the band would broaden its musical horizons. This has been achieved without sacrificing the traditional jazz approach and has led to us adding Eddie Condon, Bob Crosby, Muggsy Spanier and Alex Welsh favourites into the fold, along with some of the wonderful swing era standards from the 1930s/40s. The band is also fortunate in having three excellent and varied vocalists. This enables us to present interesting, and entertaining programmes.
Apart from Jazz Clubs we regularly appear at Jazz Weekends & Festivals, Swing Balls and give concerts in Small Theatres and Village Halls. With our wide variety of material we are also in demand for Fund Raising Events, Dinner Dances, Birthdays, Anniversaries and Corporate Events. Naturally we tailor our programmes to fit in with what is required of us to suit the occasion. Importantly we receive many repeat bookings within our working area which covers the West and East Midlands, Cheshire, Lancashire, North Wales, Merseyside and Yorkshire.
We have now recorded 7 very successful CDs, the latest being "Jazz at the Jug" This offers a taste of the varied range of music that we embrace, and which has made the band so popular.

Dixieland or Swing - Come and be entertained!!!

Mel's introduction to playing was back in the 1950s when he was a founding member of the Ceramic City Stompers. He left this band when several of the original members turned pro during the Trad Boom and pursued a variety of musical paths until the 1960s when the original Old Fashioned Love Band was formed. Since the 60s Mel has played with various bands and has provided backing for American legends such as Bud Freeman, Wild Bill Davison and Bob Wilber. He also branched out into broadcasting with many contributions on Radios 2, 3 and 4 and until recently presented the weekly BBC Jazz Beat on Radio Stoke. This programme was networked through the West Midlands, and was also available on the internet. Mel is an accomplished singer / songwriter and the band uses a number of his compositions. Whilst Mel has very catholic jazz tastes, his playing with the OFLB illustrates his mastery of the Dixieland / Swing styles and shows the influences of players such as Bobby Hackett and Max Kaminsky. Apart from being an avid reader Mel also writes and at present has a Bix Beiderbecke project under way Willy started his musical career in 1966 playing cornet with a comedy jazz band, the Vintage Syncopators. He was later to join the the newly formed Mick Burns Rhythm Kings on second cornet but medical problems forced a change of instrument. After taking up the alto sax he eventually returned to the Vintage Syncopators in 1973 . He later played in a comedy act, Laughing Stock. During the '80s Willy again changed direction by going into country music but this time playing fiddle. He returned to jazz in 1998 when he joined the Temperance Seven, having depped on alto for several years previously. Upon joining them he then took up clarinet and is still regularly called upon to tour with the Temps. During recent years Willy also appears with Cafe Society and Mike Lovell's Six in a Bar. Willy has an enthusiasm for the Chicago Dixieland / Swing style that the OFLB now favours and amongst his jazz favourites are Bob Wilber and Peanuts Hucko on clarinet with Johnny Hodges and Benny Carter on alto. We welcome his musical abilities and experience as they are a great asset to any band of our style. Outside of jazz one of his interests is walking, particularly on the nearby moors and fells. Mike started playing in 1956 as a founder member of Stockport's Dallas Jazz Band. His playing really got under way in the 1960s when he became leader of the Savannah Jass Band playing in the classic New Orleans Style. He later formed the Mike Pembroke Hot Seven which was often used by Humphrey Lyttelton as a backing band both in the North West and at London's famous 100 Club. This band undertook live broadcasts on BBC Jazz Club and also made commercial recordings for a US label. In 1970 Mike retired from music for 19 years and upon his return was asked to join Smoky City Jazz and stayed until it disbanded. The OFLB were playing in a New Orleans style when he joined up with them and he still plays this way when he appears with the Wabash Jazzmen. However the current OFLB musical policy particularly suits him as Mike's real musical love is Chicago Dixieland / Swing. He rates trombonists Cutty Cutshall and Jimmy Archey through to Vic Dickenson and Lawrence Brown as his main favourites. Away from jazz Mike loves gardening and walking the coastal paths of Anglesey to work up a thirst.

Jake is another original member of the 1960s OFLB and has featured in many bands since then. His skill on both guitar and six string banjo are very much appreciated and was resident with Dave Mott at the Wilbraham Arms Alsager for many years. More recently, prior to the rebirth of the OFLB, he had been featured with Mel in the quartets, Jazz Junction and Fine and Dandy. He is a fine singer who has created a repertoire of unusual material that, strangely enough, is rarely performed these days unless by the likes of Marty Grosz and Rebecca Kilgore. Jake is an impressive rhythm guitarist who, embracing our current musical policy, has also started to display his ability to produce wonderful chorded solos. Naturally certain numbers, such as our latin rhythm specialities, are more suited to banjo. The fact that the 6 string banjo was originally used by Argentinian Tango bands is a bonus. On either instrument Jake just swings. He still continues to be a keen mountain walker and in the past has completed many challenging ranges and summits. These include peaks over 3000 feet in England, Scotland and Wales.

Harri originates from Finland and was given musical encouragement at an early age by an Aunt who took him along to the Helsinki Conservatorium where he heard such classical masters as Segovia and Putilin. He started on guitar aged 7 and played in school bands until his teens when he switched to double bass. At 16 , whilst still at school, he was a founder member of the D. D. T Jazzband that appeared regularly on Finnish TV and even had a top 10 hit. When Louis Armstrong visited in 1962 they met him at the airport and were the support band on his concerts. Harri left for Germany in 1965 and came to England to study in 1966. He eventually started working in export. Due to business and travel commitments he was unable to play and did not resume his jazz career until 1990 playing with local Potteries bands. After several months of depping with us he eventually joined the OFLB in 2004. Harri enjoys carpentry and restores antiques and double basses. His favourite bassists are Ray Brown, Ron Carter, Oscar Pettiford and Milt Hinton. He gets taken for walks by his Alsatian and Rottweiler. Moe's first jazz inspiration came from hearing the Alex Welsh Band in 1955 and he joined Stockport's Dallas Jazzband in 1957. He was then poached to join the Dizzy Burton Jazz Aces and featured on an LP that they recorded for Esquire. Stints with other Manchester bands followed until he and his wife decided to move to London in 1962. He then played with Geoff WilkinsDiplomats on the trad scene until going on the road with the Back 'O' Town Syncopators. This resulted in much touring both in the UK and Europe. He eventually returned to Manchester in 1966 and joined the Zenith Six. He also played in a trio that backed Ben Webster at Club 43. He then spent several years with the Red River Jazzmen which included a broadcast on BBC Jazz Club. Moe retired from playing to become a long distance lorry driver for the next 15 years. He eventually returned to jazz in 2000 and rejoined the Red River until they disbanded in 2007. Moe's approach to jazz fits in with ours and his favourites, Jo Jones, Ray Bauduc, George Wettling and Gene Krupa have the band's approval. His other interests are photography and poetry and it would appear that he also collects hats.