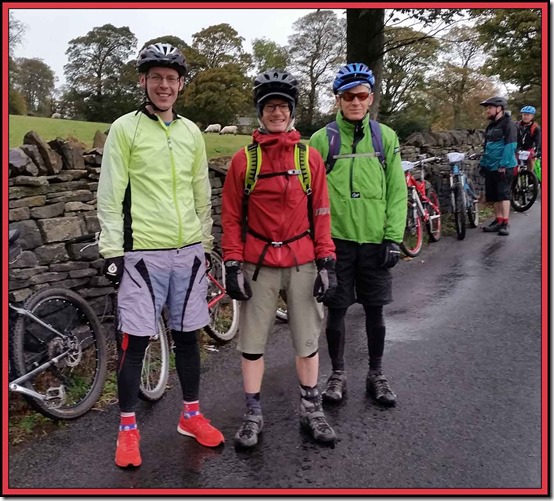 It’s that time of year again. My 16th appearance at this event which started in 1999. Only Brian Jennings has made more appearances here. During those 19 years the nature of the equipment has changed from classic mountain bikes with no suspension or disc brakes to the high maintenance modern kit. I was even passed by an electric bike on today’s first hill.

However, my old 1990 bike performed well today despite not having been serviced for some time.

Whilst Robert couldn’t make it this year, I was joined by Paul and Greg for their fourth outing in this event, and by recently retired Richard who was tired after a cross country run yesterday.

We arrived at Sowerby Bridge in light rain, which continued throughout the morning. Greg, Richard and Paul are pictured above before the start, by which time we were all swathed in waterproof clothing that kept the rain out and the sweat in… I suspect we all felt pretty damp for most of the morning, relying on the brisk activity to keep us warm.

The Hardcastle Crags support point was excellent. It breaks a steep ascent and today as always it was manned by a very efficient team. I stopped there whilst other participants admired my bike …

Rider(s): “That reminds me of my first mountain bike.”

Martin: “It is my first mountain bike.” [Not quite true as I had a ‘Rough Stuff’ bike before that.]

By now, Paul, having waited for me at the first checkpoint near Mytholmroyd, had sped off into the distance in the heavier rain. 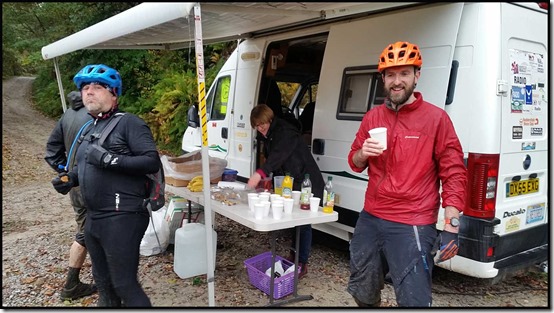 I didn’t take any more pictures during the ride. My well stowed camera (‘phone) survived an uncharacteristic incident at the very top of Midgley Moor. I was sizing up a good route across some rocks that were bordered by deep puddles, when I leant too far forward – causing the bike to tip me gently into one of said puddles. Luckily there was no witness to this carelessness, and after much wringing out I managed to recover sufficient to cycle (rather than walk) most of the brilliant descent from the moor, the last technical section of the route.

I’d passed Richard a little earlier, just getting ready to set off after a puncture repair, and I had a fear that he was lurking just behind me and would have captured the ‘lying in a bog’ incident on film, but luckily he had inexplicably (the route is very well signposted) got misplaced and finished (out of position) just behind me. He’ll fare better next year, I’m sure.

We all finished within a half hour period and collected some pretty buffs after a selfie in which my camera’s misted up lens punished Greg for his failure to take a picture of me at the start. Can you tell whose bike has mudguards? They worked well today and enabled me to discard the glasses that kept misting up. 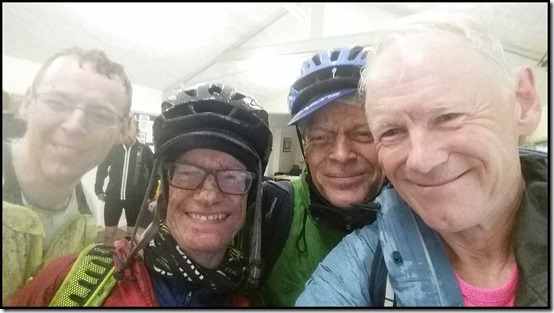 We adjourned to the Church Stile Inn for a pleasant half hour’s debriefing before the other three returned to Hale, where Paul was due to attend a birthday party. Happy birthday, Paul. I went home, leaving Sue somewhere in the vicinity of rainy Hebden Bridge, where coincidentally she was out with some of our walking pals.

Here’s a record of our CMBM efforts, excluding Don, Liz, Craig and two Davids whose efforts would just clutter this page, that they are unlikely to visit anyway. 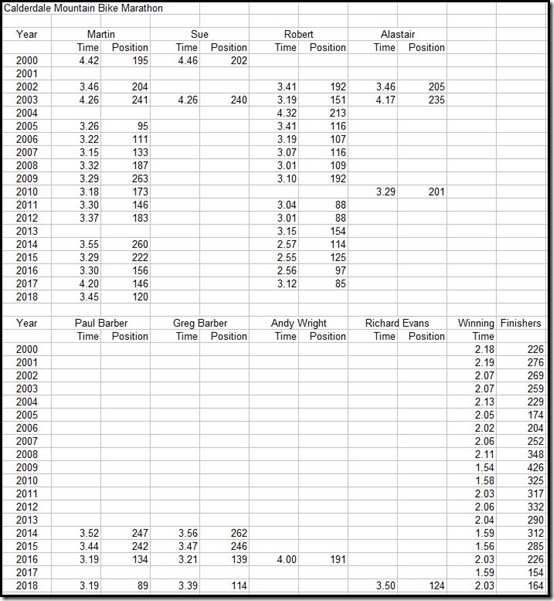 Here’s the route – slightly different to last year’s course that was adjusted due to a path closure – 42.2 km with about 1100 metres ascent. 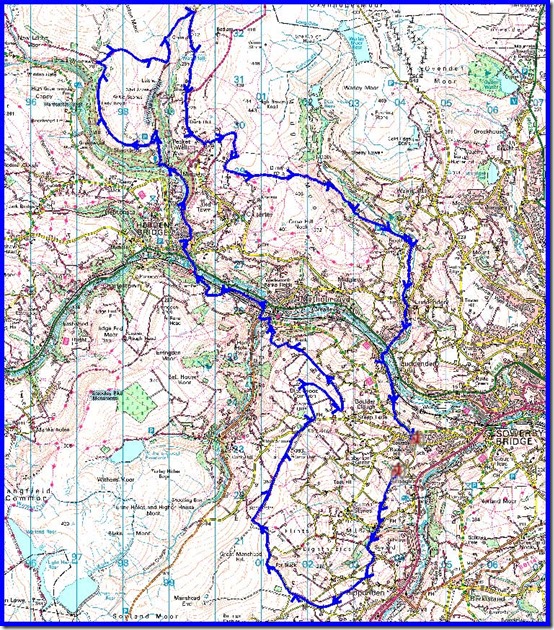 The results are here, and all my blog reports are here.

Congratulations to the organisers for making the event run so smoothly and for providing lots of drinks and food along the way and at the finish.

Finally, here’s a photo of me descending to Grain Water Bridge last year. I’ll add this year’s picture if there is one (see below). It may be very similar but I’ll be covered in waterproof clothing that is struggling to breathe. 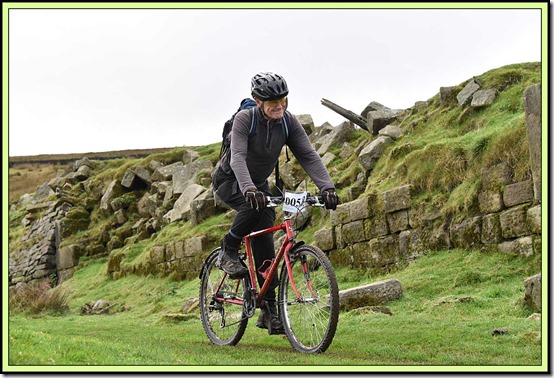 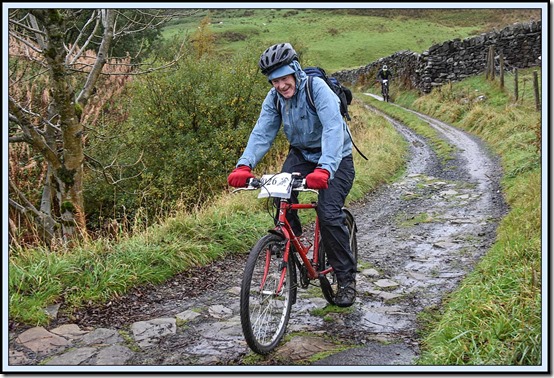