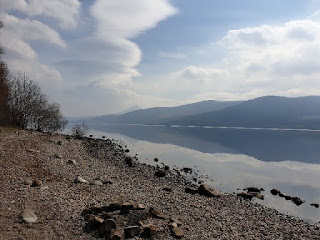 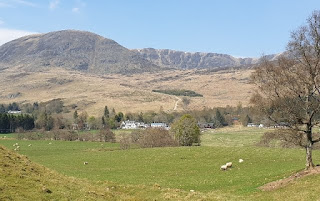 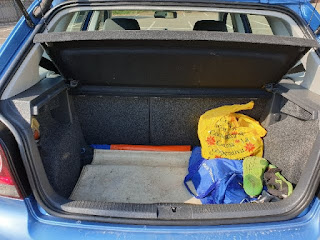 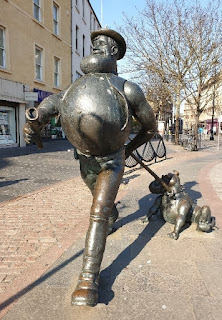 The sun returned today. After a leisurely start from TGO Challenge HQ in Newtonmore, M&M's package was delivered to a friendly B&B in Blair Atholl.
Most of the rest of the day was spent on 200 miles of quiet country lanes, starting with those to Bridge of Gaur, with red squirrels running atop fences alongside the car, and numerous campers enjoying the hot weather beside Loch Rannoch.
A happy hour was spent with Eddie and Heather, in 'The Middle of Nowhere'. What a contrast with our Bridge of Orchy accommodation, where our room at the West Highland Sleeper (if the business survives that long) may not be the best, but was the only reasonably priced room available...
I left Eddie and Heather to set up an Easter Egg Hunt and barbeque, and drove slowly, past Schiehallion (featured in the top picture taken beside Loch Rannoch), to Dundarave, in Strathtay. It took less than an hour and a half. In May it will take us three days. Today I paused by Loch Rannoch and observed a wide variety of bird life whilst taking a call from seven year old Jacob, euphoric in his pleasure at having got a PB of 10.05 in this morning's 2km parkrun at Burnley. "I'd have been faster if I hadn't fallen over" he observed. Well done, Jacob.
Parcel duly deposited, I moved on to Glen Clova, where the hotel bears only minimal resemblance to the one I first visited about 40 years ago.
"It bears very little resemblance to the place I started working at three years ago" observed the friendly member of staff who relieved me of my last re-supply parcel. She was well aware of the Challenge, and more than happy to greet Challengers and store parcels, despite the up market ambiance of the place. She agreed that it was a shame for Challengers that the bunkhouse had been converted into steadings (hotel rooms outside the main building), but apparently the bunkhouse was unused for much of the year. Times change - in these more affluent times guests tend to want good en-suite rooms rather than the basic facilities of the past.
The second picture shows the Clova Hotel at the head of Glen Clova, and its backdrop of mountains.
The car boot was now devoid of parcels. Time to make my way to a Travelodge in Dundee. Great value here - a spacious double room, with all facilities, for £22.
The last couple of pictures were taken during a 6 km stroll around town on the warm summer's day. The Desperate Dan statue featured on these pages a couple of years ago, when the recently opened V&A museum was under construction.
I'd planned a restaurant, but couldn't resist the pull of a supermarket, where the components of a fine salad were sourced. Luckily, I found a spork in my luggage - eating using just fingers and a credit card would have been a bit messy!
Posted by Phreerunner at 22:01

Magic names from Scotland - it's been too long since I visited.