Gayle asked why was I using two GPS gadgets recently?
GPS gadgets come in several forms. For serious navigation there are numerous hand held gadgets, some of them with maps. I've gone through a few of these - Satmap, Garmin etrex Vista, etc. I've now sold them all on ebay apart from the fairly basic Garmin etrex10 that only gets occasional use. The Anquet and Viewranger maps on my mobile phone (with power pack), with back up paper maps and compass seem to meet my current needs.
Whilst I rarely need to know precisely where I am, I do find it useful to know where I've been, so a gadget that records my route that can later be downloaded as a .gpx file to the maps I have on the computer at home, is very useful. It's also good to be able to view 'splits' of times per kilometre when running.
The recent such 'watches' I've used are shown above. They were preceded by a wonderful watch called the Suunto Altimax. I used this on our Pyrenees HRP crossing in 2004 and the height information it provided was extremely useful. It's a regular sort of barometric watch with no GPS, and the battery lasts for several years. I wrote about it here. The one I used in 2004 wore out and I bought a new one that I've hardly used. It's due to be ebayed. That's because I have the maps on my phone, and am using one or more of the GPS enabled watches shown above.
I bought my first GPS watch, the Garmin 310XT pictured in the middle above, in April 2011, for the above-mentioned purpose - tracking routes so that they could be downloaded later. I've also found the data given on the big screen useful when running. I didn't use the gadget as a watch, simply taking it off after each use and re-charging the battery for next time. The battery lasts for about 12 hours.
Meanwhile, Fitbit came on the scene with its sophisticated GPS watches that link to mobile phones using an 'app'. This appealed to me and in 2016 I bought a 'Surge'. The strap broke in 2017 and the whole unit was replaced under warranty. Earlier this year the strap on that one broke - out of warranty. I bought a new 'fit it yourself' strap that lasted a few months, then another one that is pictured on the watch shown above on the far left. Shortly after fitting that, I realised that one of the screw threads in the watch had reached the end of its life - the one on the bottom right shown below, so this repair could only be temporary. 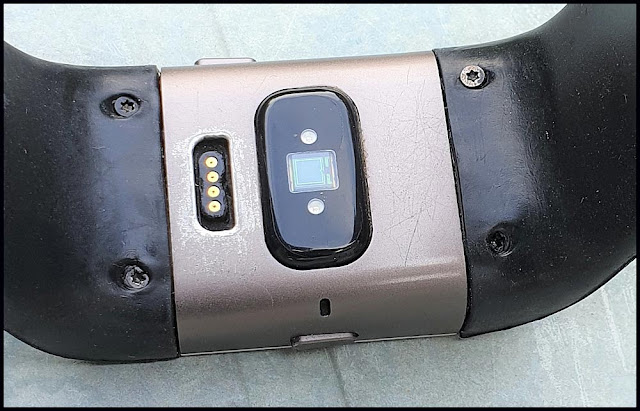 So whilst the above watch still functions, the strap problem means that it's a candidate for the recycling bin.
So I've replaced the Surge with, second from the left above, the Ionic, which should last longer as it has a replaceable strap. In fact, it comes with two straps! It has more features than the Surge, and seems like a really nice watch. It has a GPS tracking capability, but that drains the battery in a few hours ('up to 10', but I suspect rather less). So I'm happy to use it as a watch - recharging it every few days - leaving the GPS function for occasional use as a back up for the Garmin, which was becoming increasingly unreliable. The Ionic is a really nice watch, and much more - I still have to learn its full capabilities.
Back to the Garmin 310XT, another product with strap problems, albeit - at a price - replacement straps are available. However, once the rubber surround gives way, any water ingress gives rise to steaming up and erratic readings. My first 310XT lasted five years - it's the one on the left shown below. It still works, but the strap was transferred to its replacement, an identical model bought in 2016, when the strap on that one broke. As you can see - it's the one on the right below, not only the strap has broken. The rubber surround has given way by the on/off switch, which is now operated with the blunt end of a key. The gadget still works, and I've been using it alongside its replacement, but in future it'll be kept as a back up only, in a dry bag. 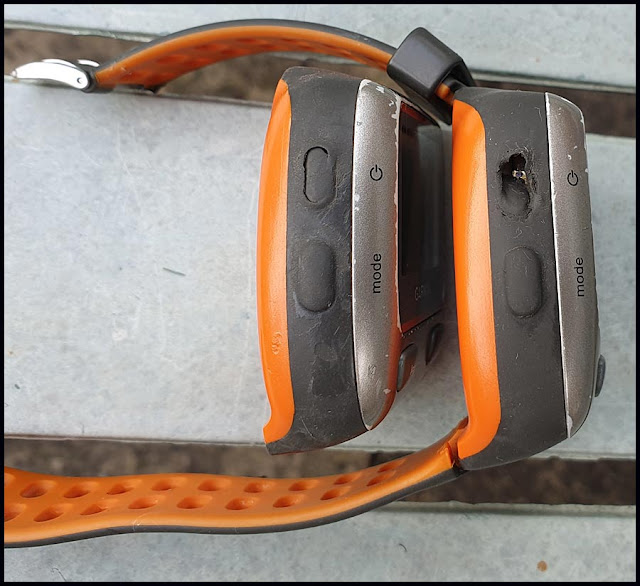 My research into a replacement, the 310XT no longer being available, led me to the £250 Garmin 245. I bought one at a discount and tried to set it up and get to grips with the plethora of settings. After a good two hours, and after trying for ages to turn it off, and failing, I boxed it up and sent it back for a refund. A shame, as it looks a really good piece of kit if you can master its workings.
Then I chose the much cheaper (£100) Garmin 35, pictured far right above. With the help of some youtube videos I've been able to (just about) get to grips with this. It provides lots of data that downloads in the background via Bluetooth to the Garmin Connect app where all my trips data is stored. Whilst it could be regarded as unnecessary duplication with the Fitbit Ionic, I'll be using the Garmin 35 only when I'm running/walking/cycling - re-charging it after every use. The battery life in GPS mode is said to be 13 hours. I doubt that's correct, but hopefully it'll be adequate, especially with the Ionic or one of the 310XT watches as back up on a long day out. I will have to get used to having only three bits of data on the screen, compared with the four that I'm used to seeing, and there are other aspects of the Garmin 35 that may take a bit of getting used to. But at least it's easy to turn on and off!
Posted by Phreerunner at 18:13

I had to put half a new strap on my Surge a couple of days ago. That's the gadget I use for running.

For walking my Garmin Forerunner 305 served me well for years, until this April when the battery fell off a cliff (metaphorically; it went from a 12 hour life to struggling to manage 4 hours). As I almost never wore that gadget on my wrist, I was able to replace most of its functionality with my old mobile phone, in a dry bag, recording via Memory Map.

I've had my eye on a Forerunner 35 as a replacement for my Surge. The downside (compared with the Surge) is it doesn't do height. The upside is that it's waterproof.

I also wouldn't want to be without my altimeter when going up hills, but for me it's not usually a tool of navigation, but of motivation.

The Ionic is a nice piece of kit! It would probably be fine for me, but I like to upload to Garmin Connect, where I can compare all data since 2011, thus I have two smart watches when one would be sufficient.

It's amusing at the running track. The Fitbit draws comments like "amateur" (to which I fully admit), whereas the Forerunner 35 is "a nice piece of kit".