Tuesday 11 February 2020 - P7 (Kingsmere) to Champlain Lookout and back 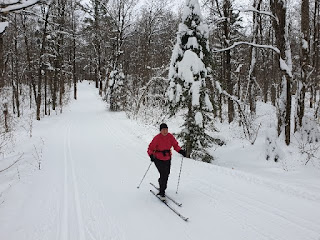 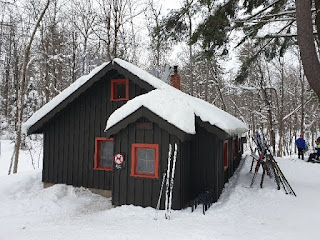 Whilst Sue, Ken, Roy and Susan opted for the torture of a two hour skiing lesson with Francoise, I chose to join Helen on a short outing from Kingsmere.
Conditions were good. Not much below freezing, and a well groomed trail.
I took the route described below; Helen only went as far as Huron, taking the Parkway/Huron link/Ridge Road route, to meet up for lunch at Keogan Cabin, where it was lovely and peaceful once a loud Frenchman had gone.
Blue Jays on the feeder were joined by a Downy Woodpecker (a small 6" cousin of the more common 9" Hairy variety) and a Chickadee, with a red squirrel enjoying their spillages.
Keogan is the lower of today's pictures, only about 5 km from the trail head at Kingsmere.
Stats: P7 (Kingsmere) > #30 > #1 > Champlain Lookout > Champlain Parkway > Fortune Parkway > #1 > Keogan Cabin > #1 > #30 > P7.
17.5 km, 340 metres ascent, taking 2 hours 40 minutes plus stops.
Meanwhile, Sue and Ken were delivering a watch that they had found to the Visitor Centre, where the resident beaver was actively restocking his lodge with branches. No pictures here, but Ken has compiled an entertaining video...
Posted by Phreerunner at 23:40