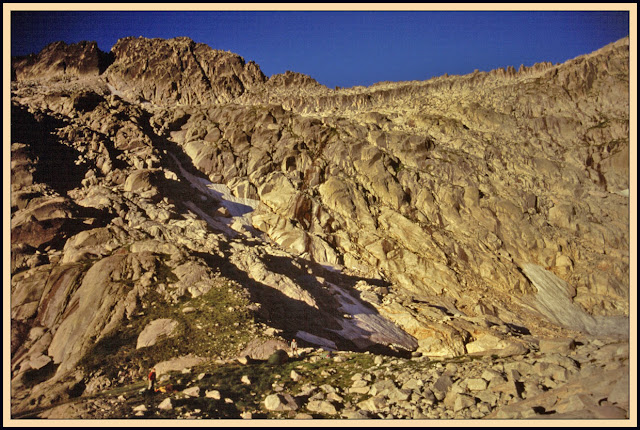 Our campsite by the highest Mullere lake, looking back to yesterday's descent route
Sue and Martin's Big Adventure
Day 33 - Friday 27 August 2004 - Stage 26
Postcard Summary (on yesterday's card)
Idyllic Camp to near Collado Retany De Mar
Superb weather continues, Julie leaves (tired), lovely camp by lakes – 8.5 hours, 13 km, 750m ascent
Another long descent but in a lovely valley with lakes and waterfalls.  After leaving Julie at the Vielha tunnel, we climb into an area of deep blue lakes.  Had an invigorating wash in a stream at our lovely camp – saw nobody at all.  Good view from our tent kitchen.  Extra bonus was blue sky all day again.  We can now resume being two, not three…

Diary Entry (by Martin)
The sun hit the tent before we got out of it today - 7.25, so we had a much warmer start than usual and were all straight into t-shirts and shorts. It had been a cold night. Julie found ice on her tent, and the temperature inside ours was 6°C at 7 am. We enjoyed a leisurely breakfast on this, Julie's last day with us, and didn't get going from our high (2500 metres) perch until 8.40, just as a gigantic flock of sheep arrived at our lake. Last night I had seen deer skipping across rocks far above us. 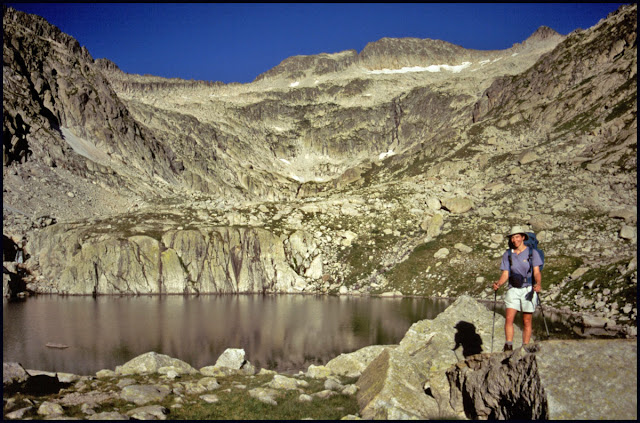 Slowly, at the pace of Julie, we descended over rocky terrain to 2000 metres, where a dose of mountain mix failed to have any effect on the pace of descent. But it was a nice day and birds were singing and waterfalls were falling.
A few last scrambly sections to help Julie over. 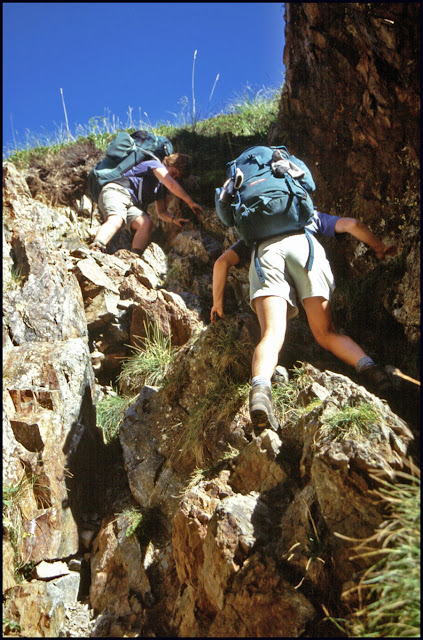 Then a further delay whilst she lost a contact lens and had to replace it, and we were down to around 1700 metres for an idyllic brew above a pretty cascade, 11.10 to 11.40. 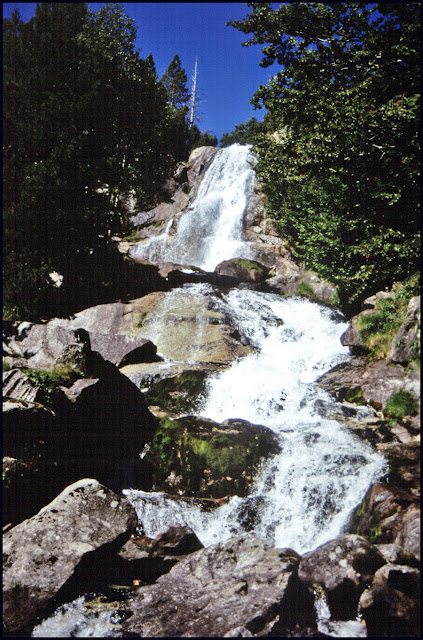 We gave a few things to Julie in preparation for her imminent departure, and discussed few arrangements at this lovely spot before descending through the beds of field gentians to Viella Hospice, where the refuge was shut and the construction of a new tunnel was in full flow. Final photos, then Julie went off to hitch to Viella and Sue and I were released to resume our old, much faster, pace. [Julie had always been playing 'catch up', but our pace had slowed to try to avoid getting too far ahead. There really was a big difference in our speeds.] 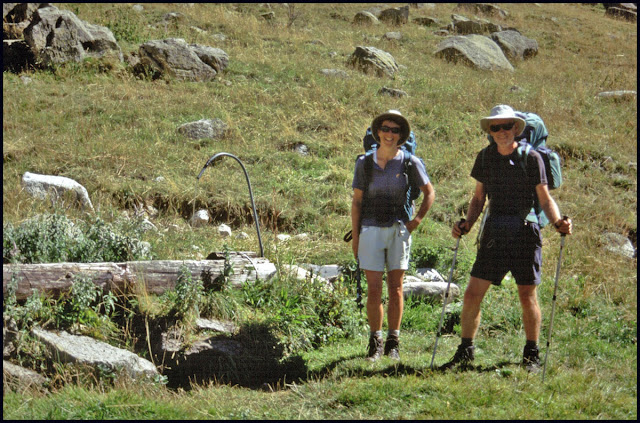 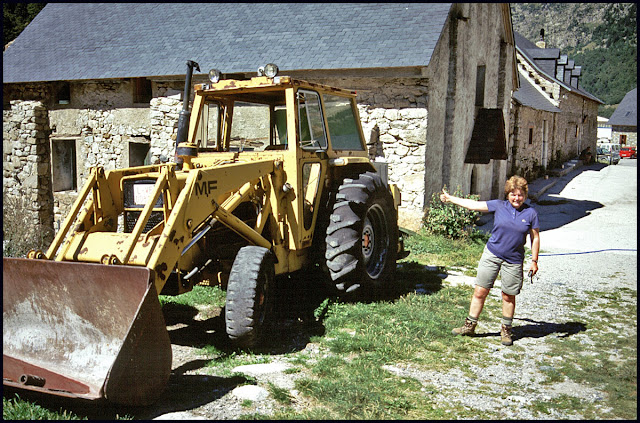 Unfortunately, I couldn't release myself from Julie's 6 metres a minute ascent pace, whilst Sue bounded up towards Port de Rius much faster. It was hot. Having left Julie at 12.20, we decided to get half way up to the Port before lunching - 1.25 to 2.05 - in a nice spot by a stream.
Refreshed, I then went a bit quicker to reach the 2328 metre col at 3 pm. Not a normal col - there was a rocky cleft ahead. This led to a sizeable lake. A small lizard about 2 inches long was seen. Sue was now nursing a ricked back as a result of pulling on her rucksack after lunch. So we now both continued slowly, in lovely scenery of mountains and lakes, leaving GR11 (which we had joined at Viella Hospice) in favour of the more southerly HRP route towards Collado Estany de Mar. 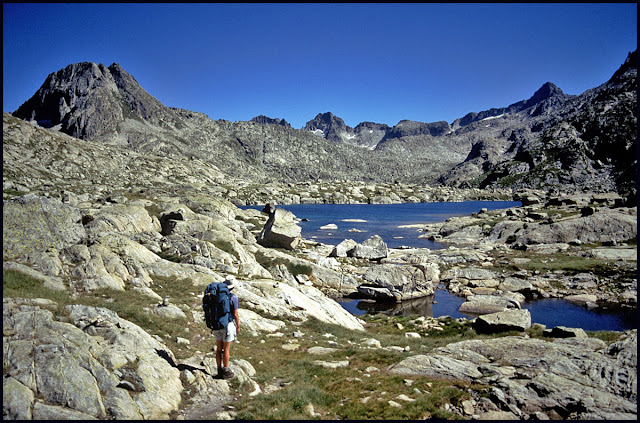 We stopped at 5.10, just before this col, by a nice stream, with a solitary orchid, running into a pretty lake. 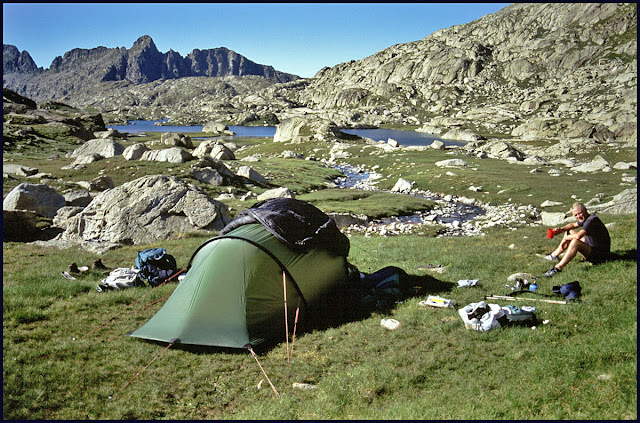 Time to wash and dry clothes and selves. No one else around. We seem to have left the main backpacking area. We are at 2330 metres. Sadly lose the sun at 6.45 and adjourn to tent to cook usual excellent soup/pasta meal, in view of distant and close by mountains.
Perfect clear blue sky. Will need long johns on again tonight. Finish with chocolate and decaf coffee. Nice to be in the old routine, though Julie was good company. It is much easier with just the two of us.
Hope I don't get nightmares about yesterday's hairy ascent to the wrong place (very unstable loose boulders/scree) and the subsequent down/up/ down with rucksack routine down a scrabbly gully on the other side. (I recall this vividly. My incorrect route down very loose terrain needed me to leave my rucksack behind several times in order to recce a feasible route, before returning to get the heavy bag; whilst Sue and Julie were on the waymarked route that wasn't much easier and included the quite scary snow traverse shown in yesterday's pictures.)
Stats and route (Viewranger):
13.5 km, 850 metres ascent, 8.5 hours 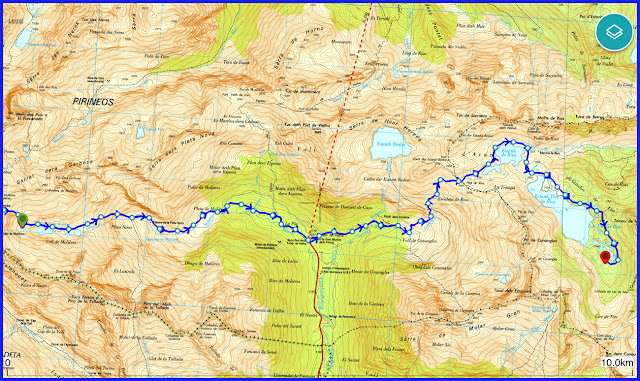