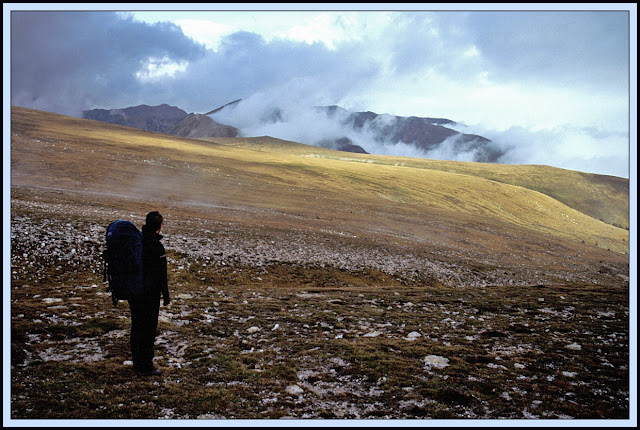 Sue and Martin's Big Adventure
Day 49 - Sunday 12 September 2004 - Stage 40
Postcard Summary (on tomorrow's card)
Spanish Refuge to Marialles
High level contouring, dodging the mist – 7.4 hours, 22 km, 600m ascent
We spent the day with the compass and altimeter out trying (and succeeding) not to get lost on some high ground ~ 2200 metres.  The paths came and went, scenery changed from Lakeland to Derbyshire (but in metres not feet, of course) and we did get occasional views before descending to a nice refuge – only 5 staying – good food and company despite the language barrier.
Diary Entry (by Martin)
'Dodging the Cloud'
After a good meal, help yourself from a counter, sort of, Spanish refuge style (even baffled some Spaniards)* we slept with five others in a hot dormitory for 10 people. The hut must have been about two-thirds full, with thirty or so in residence.
Breakfast was supposed to start at 7 am so we were up as it became light and breakfast was served from about 7.20 - just as we arrived for it. Tea/coffee, toast and jam - not a great selection, but we stuffed ourselves as there was no limit on quantity, just help yourselves. So we got away commendably early - 8 am - into a cloudy environment.
Before very long the cloud came right down and waterproofs were donned. They were on and off all day. The cloud came and went but mostly came, with occasional glimpses above and below us as we progressed along a route that contoured at 2200 - 2400 metres for most of the day. (See top picture.)
The promised views of Canigou were very elusive, let alone any chance of seeing the Med (which probably wasn't visible today anyway). We saw two people breakfasting under an umbrella on the Pla de Coma Armada, soon after which, at a stop for mountain mix, we spotted mouflon for the first time. 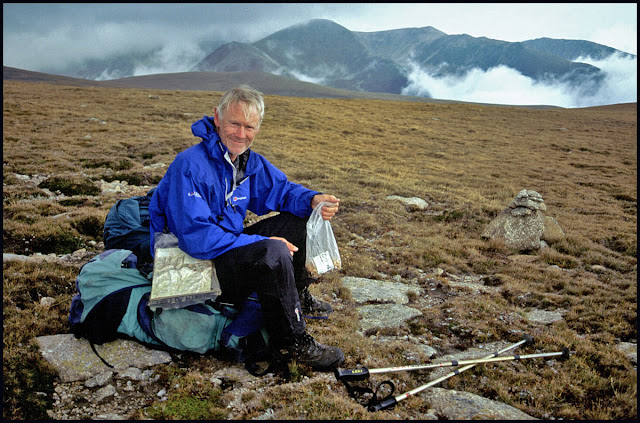 We saw mouflon from here
Cloud, sun, breeze, waterproofs (first time in ages) all came and went. Today's scenery could have been Derbyshire, if the metres were converted to feet.
We lunched at a picnic table made of granite, in a cloud, at Collade des Roques Blanches. 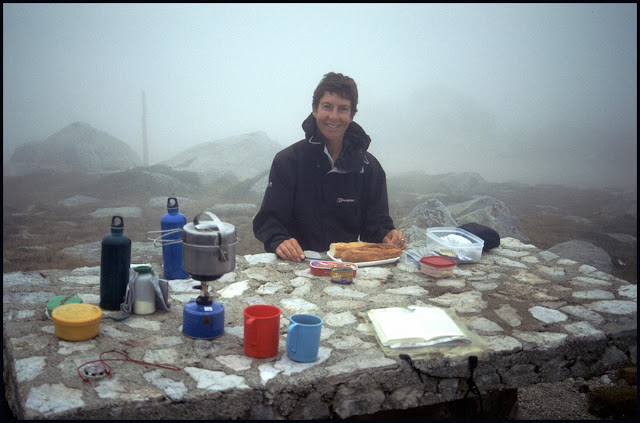 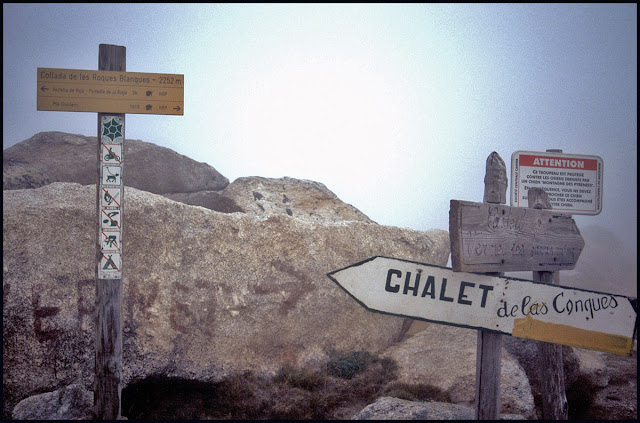 The rocks looked uniformly grey! And so, we continued without difficulty, eventually emerging from the mist at Pla Guillem, where we easily found the huge cairn pictured in Joosten's guide. We passed two unmanned refuges and headed down easily to reach the excellent and friendly Marialles Refuge by 3.20 pm, at about 1700 metres, the lowest we have been for some time.
And so, a warm misty refuge. Few people appear to be staying. A Spanish trio wait for lost walkers who eventually arrive. Two English walkers turn up. they should have been back at Cortalets by 3.30 (it's now 5.30), so they shoot off in the direction of Vernet, hoping that promised transport will pick them up....#
Some Catalans arrive and help with translations re 'Rescue of the Lost English' before departing to , and work tomorrow. Then more English turn up with a girl who wants a shower. They converse fluently in Spanish and French (or Span/French = Catalan), even with each other! One is based in , whence they return having consumed half a bottle of wine.
So we are left with two shy Catalans, Daniel, a retired architect from with a new granddaughter, and the jolly guardian, who soon supplies us with Catalan soup. A stew with huge carrots, black pudding and big chunks of pork. Excellent. Followed by lettuce and goats cheese, home baked apple cake, and her reading from a book about a Buddhist priest in ("Tres philosophique"). We tried hard to understand. Sue spoke more French than they spoke English. We all love the mountains. 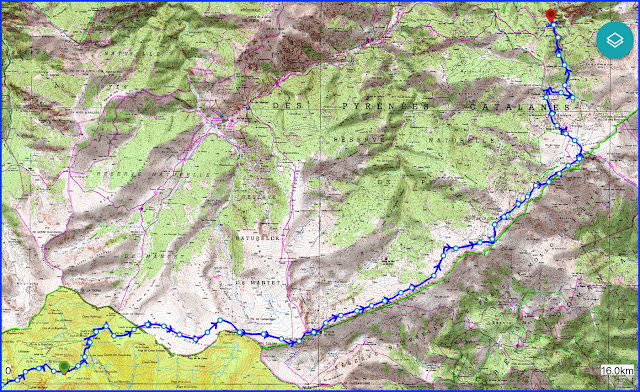 * I remember this clearly. We sat with a French couple from . "We have no idea what is going on" they offered, "we live much closer to you in than we do to these people", as we puzzled over how many pieces of fruit we were allowed to collect for our dessert.
# Another clear memory is of these two chaps turning up in a state of panic, muttering "where are we? ...wonder if anyone here speaks English". I was conveniently sitting near the entrance writing this diary, so could help - much to their relief. It transpired they were on a self-guided walk and had descended from Pic du Canigou down the wrong side of the mountain. They were quite distressed with this diagnosis. I calmed them down and fed them Mars bars, while the guardian arranged for a taxi to meet them at the road head from Vernet.

You had better weather than me! I was over the same ground, same time of year and made my way through a blizzard. Grisly, and I don't mean the bears...