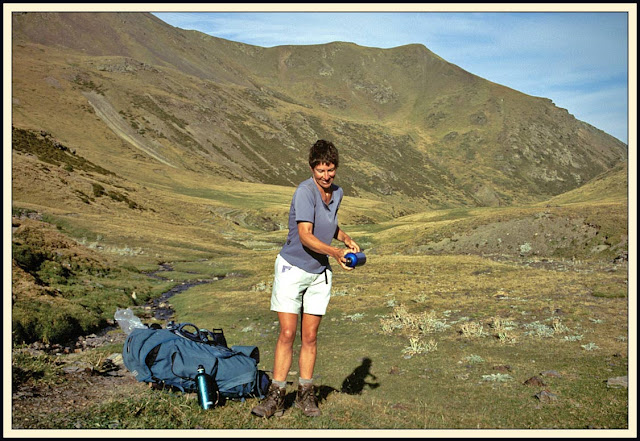 Sue and Martin's Big Adventure
Day 48 - Saturday 11 September 2004 - Stage 39
Postcard Summary (on yesterday's card)
River camp to Refugi d’Ull de Ter
A fine ridge walk – like the , but in metres not feet – 7.0 hours, 16 km, 1200m ascent
We reluctantly left the nice wild campsite – possibly our last this trip, and had a short, sunny, windy day in high mountains that reminded us of the . Lots of people about – mainly day walkers.  Tonight we have our first experience of a Spanish Refuge.  We arrived here at 3.15, but they don’t serve food until 8.00.  Luckily we had a very lavish lunch, thanks to the supermarket we visited yesterday.
Diary Entry (by Sue)
Both had a good night's sleep despite being so close to the stream. Initially, cow bells signalled the cows moving to lower pastures for the night, but the sound died quickly.
It was a warm but very breezy morning (14°C), and this helped us to be ready to leave at 8.10, including using 'rock toilets'. During packing, the ability of my Tilley hat to float was tested as it blew into the stream. It floated well but did get rather wet.
The path continued up the valley, which became wider and more grassy. Stopping at 9 am for some mountain mix, the sun filled the valley and we heard marmots and saw a couple of deer above. The first attempt to get water failed as Martin spotted cow dung just above his filling point in the spring! The second, higher, was more successful, but chlorine tabs were used to be on the safe side. (The top picture was taken here.)
That sets us up for the rest of the climb to d'Eyne, on a good path that steepened towards the top. Here, (arrived 10.20) we munched some good white chocolate before continuing to climb to today's , the Pic du Noufonts at 2861 metres. The strengthening wind was bringing cloud in from the south west, and I needed a fleece as it was a chilly wind. 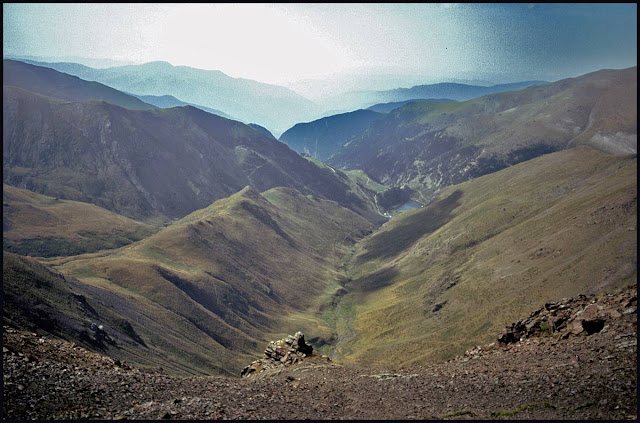 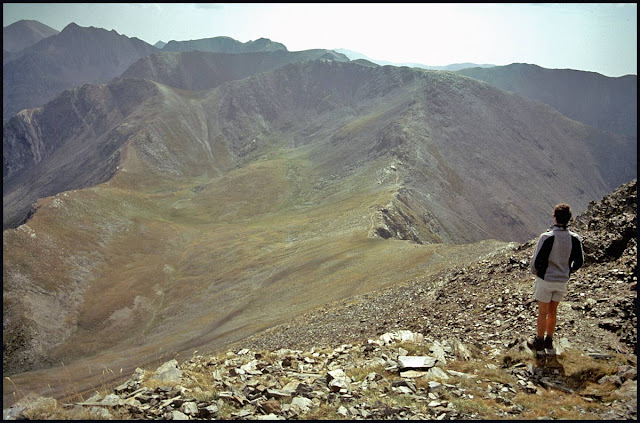 The view ahead, from Pic du Noufonts
Already quite a few (mostly Spaniards) people around. A descent to where the GR11 joins today's route, and red and white marks begin. A further climb, again fairly steep, then some lovely undulations at about 2800 metres brought us to the Col de Neu Creus - col of nine crosses, which couldn't be mistaken! The terrain and scenery today we're just like the - good paths, nice ridges, grassy hills - just somewhat higher here! 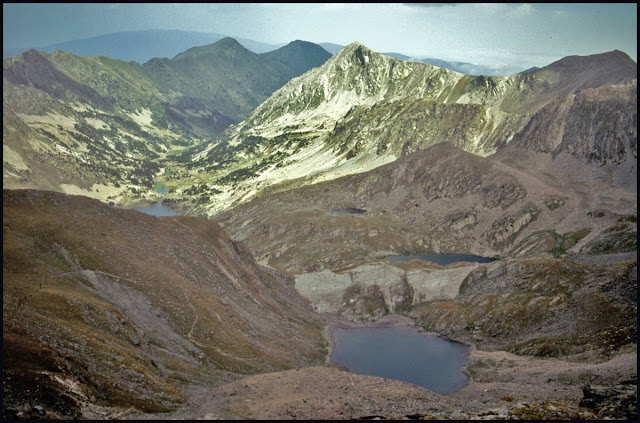 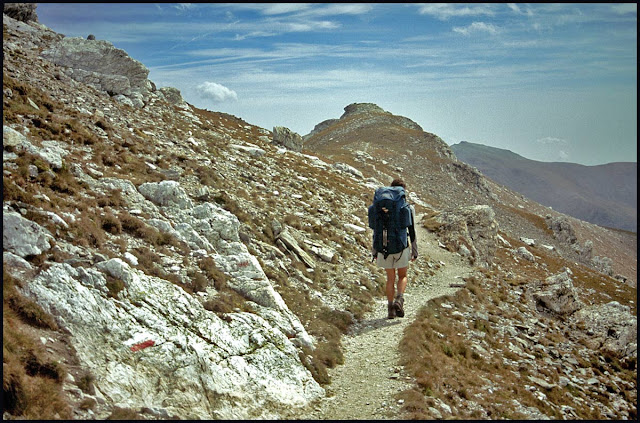 On the ridge near Coll de Tirapitz
Another descent and climb - surprisingly mountain bikers coming down the rough, loose path, then a lovely area dominated by white quartzite rocks. That signalled the end of our ridge and the path wound down in a big bend. Lunch out of the wind - pâté de fois and mackerel in mustard sauce (a sign that we visited a French supermarket yesterday) and a cup of tea.
Only one more climb to the Coll de la Marrana on a gentle path, revealing a view of pistes again. 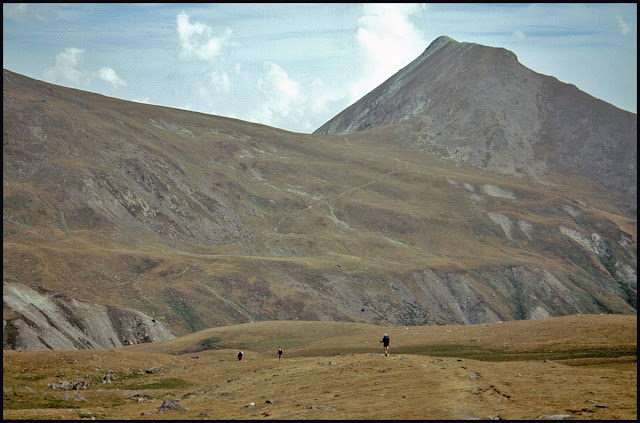 The ascent path to Coll de la Marrana
Cloud was sitting in one valley, and being blown around where we have walked today. The ridge followed the French-Spanish border from d'Eyne to Col de Tirapitz, and we are now in for not quite the last time, until an hour or so into tomorrow's walk.
We arrived at Refugi d'Ulldeter at 3.15 pm - guardian still having lunch! 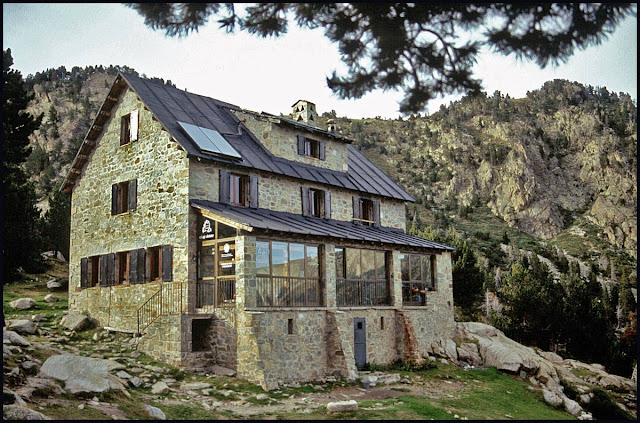 Suddenly, the refuge is busy and noisy. This will be our first overnight in a Spanish refuge. Rules are provided in French, and are not unreasonable. We can only go upstairs after 5 pm. In the meantime, sent a text to Graham and Tove, who get married today.
Bit of postcard writing after putting bags upstairs. As Martin has now finished 'To the Poles Without a Beard' by Catherine Hartley (we've both enjoyed this book from Julie about a scatty woman who walks to both poles) it is time to neatly cut 'Fresh Air Fiend' by Paul Theroux in half, so that Martin can continue where he left off, and I can continue from Part 5.
Stats and route (Viewranger):
16 km, 1200 metres ascent, 7 hours 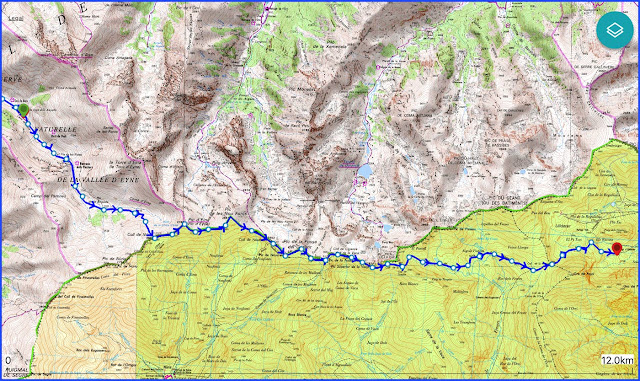