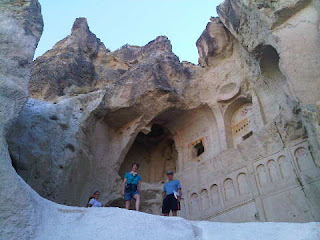 Some were surprised that this World Heritage site was not on KE's itinerary for our tour. So after breakfast this morning, Susan, Roy, Sue and I set off to find out why.

Arriving just after the 8am opening time, after a twenty minute walk from the hotel, we found our way around the site compromised by early coach parties. By the time we left, about 20 coaches were in the car park for the fairly small site. A tour guide's nightmare. But the four of us managed fine, squeezing into the small Byzantine churches with their comparatively well preserved frescos.

Pictured, is the frontage of the museum's most famous church, Karanlik Kilise, the 'Dark Church'. Apparently it's one of Turkey's finest surviving churches, taking its name from the fact that it originally had very few windows. The lack of light has preserved the vivid colour of the frescos, the upper of which have been spared by iconoclastic Muslim vandals in an era preceding the boom in tourism from the 1980s.

Pottering around the museum, views were enhanced from time to time by hot air balloons that were floating as close as they could to the rock pyramids that house the churches and homes that were occupied until around the 1920s.

By 10am we were back at the hotel, Turan received his generous tip, and our party, lacking 'Cookpot' Jane, 'Geordie' Anne (left for an earlier flight) and 'Tumbling' Tessa (stayed for a later flight), was soon on the road for a last journey in the bus, to Kayseri airport.

Now in Istanbul, we are down to five in number, as eight of the party are having a few days here. Sue and I have just Alan, Dave and Lil for company as we embark on a spending spree in an effort to dispose of our remaining 9Lire!

So it's goodbye from Turkey. I'll be adding an index page in due course, and a link to a slide show, and maybe a few comments (and edits) in response to those I haven't yet seen or haven't yet been made. It was great to have been on such an enjoyable, friendly, well organised and well led trip. We will miss you all. Do keep in touch.