Saltos de Petrohue and some volcanoes 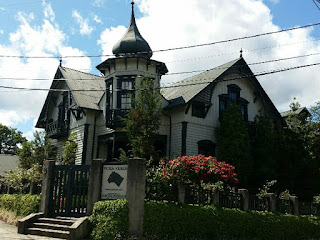 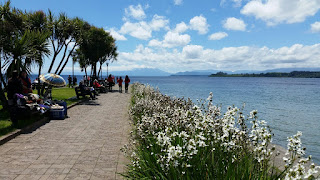 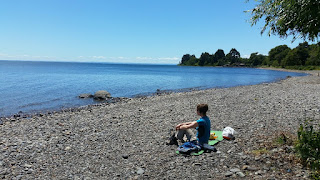 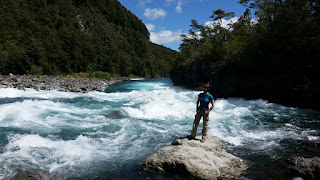 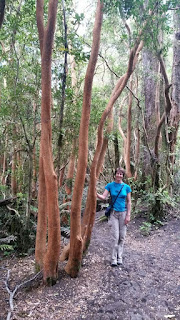 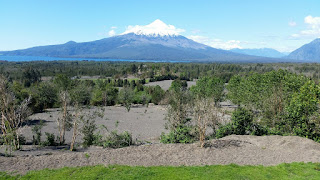 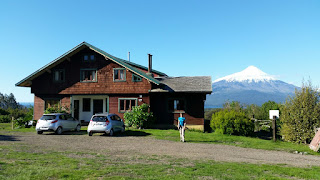 Today's posting is courtesy of Sue, who seems to be able to compose entries on her iPad much more quickly than I can on the phone, so I see no point in duplicating the effort when I can (I know I sometimes struggle with this) try to be sociable.

"I'm writing this looking out of the window from Hostel La Quila at Lago Llanquihue with the conical, snow-capped Volcán Osorno (2652m) just across the other side. Behind us is Volcán Calbuco (2003m) which erupted for 2-3 days in April this year. As a result, the foreground is covered with 40 to 50cm of grey ash, or rather, small pebbles of pumice. The sky is nearly cloudless.

It is good to have left the city behind. After breakfasting at Hotel Seminario, we booked tonight's accommodation then collected our Chevrolet Spark from a few blocks away. At least it's not new, with 27,000 km on the clock and a few dints.

Getting away from Puerto Montt was easy, and the short distance to Puerto Varas (17km) meant we were there by 11am. The town is situated at the southern end of Lago Llanquihue, over which we could see Volcán Osorno, but it's head was in cloud. However, it was becoming sunnier, and we sat outside La Barista with an Americano Macchiato, having to apply sun cream.

The town has German heritage, and there is colonial architecture in houses from the early 1900s. Casa Kuschel, uphill from the lakefront, was a grand, turreted house built in 1910, with the contrasting small wooden Casa Angulo built in 1940. Other examples, some with wooden tiled cladding, were highlighted by signs.

We picked up food supplies at a supermarket, bought some gas, and headed away from the town at lunchtime, to follow the lake around its south east side towards Petrohué.

We picnicked on the shore of the lake in the warm sun, then continued east towards the Parque Nacional Vicente Pérez Rosales, through the village of Ensenada. It was here that we realised that there were piles of ash by the side of the road and that some of the fields were grey. This was the ash from the eruption.

Later, Nico informed us that the residents of Ensenada had to leave their homes for a month whilst the clear up took place.

Our destination was the Saltos de Petrohué, waterfalls formed by a hard layer of lava that has been eroded into channels. Unfortunately the best views of the tumbling green water were out of bounds due to work on the walkways and bridges, but we walked two other paths or Senderos, one to a green lagoon where trout were swimming, finishing at some decent rapids, the other through the forest to a clear river with interpretation boards explaining about the trees.

Despite being in Spanish, we could make out some of the explanations. La Quila, the name of the hostel, is one of the trees, with a pale brown bark and a cold trunk. The paths were inches deep in ash, so it was similar to walking in sand on a beach.

Returning back along the road, we turned on to a dirt road for the 3 km to the hostel, on the flanks of Volcán Calbuco, arriving around 4.30pm. Nico, our host, is French and has lived in Puerto Varas for 15 years. He moved out here in August, buying the German-built house from a family  who didn't wish to continue living here after the eruption.

The house is spacious and we had the pick of the rooms, opting for a double with terrace looking out over Volcán Osorno. Nico then made us a large mug of tea which we had sitting on the terrace, with an attentive dog!

We then walked up the lane further, past tall eucalyptus trees, a few other houses, and piles of grey ash, returning after about 45 minutes, for a shower. The glass of white wine and bowl of olives are complementing the view of the volcano."

Later, a German couple, Stefan and Susanna, arrived and we are all set to enjoy Nico's meal.

Glad to catch up with your travels again. As usual you seem to be making new friends and enjoying a new country. I was sorry to hear the news about Laurie. I remember a walk we did with him many, many years ago around Matlock. Walking down a country lane we were assailed by birdsong from a flock roosting in a large tree and Laurie identified them as siskins. It is sad to lose such an old friend.

Keep on enjoying your travels and I hope the hire car doesn't let you down.

Love to you both.

I need to stop saying Wow, but thats what it is. If only there was an old tractor around…..!

Was there a "Go on Sue, just step out onto that rock over there, it will make a great picture" ?

Good to hear from you Dot, and nice to have a good memory of Laurie. His bird book was a good deal more battered than any of our flower books.

Alan - the search for a tractor continues. There's one just up the track from La Quila but it's not up to scratch.

Cary and Penny - thanks for your comments. Yes, actually it was "Go on Sue, just dive in off that rock!" She's a failure!