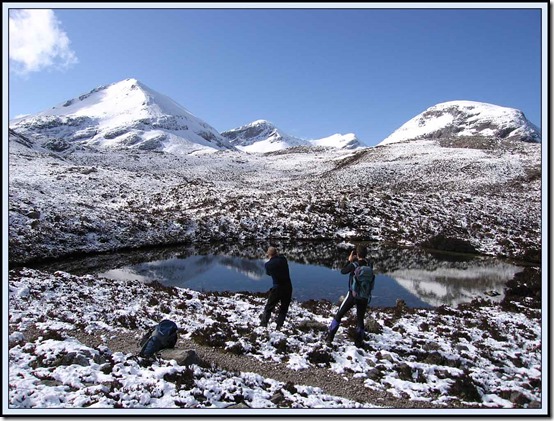 Ruadh-stac Beag (left) and Meall a’ Ghiubhais (right), from the east

Reading Conrad’s blog last night brought a joyous reminder of a wonderful day’s walk on 15 April 2008, when five of us set out to climb these outliers of Beinn Eighe. Only Dave, Sue and I made it to the tops of both hills. Reminded now by Conrad, my memory of the day is very clear. Dave is shown below, romping down Ruadh-stac Beag with Beinn Eighe in front of him, after he and Sue had utilised my carefully placed footsteps for their speedy ascent after they had originally headed misguidedly up to some impenetrable crags. 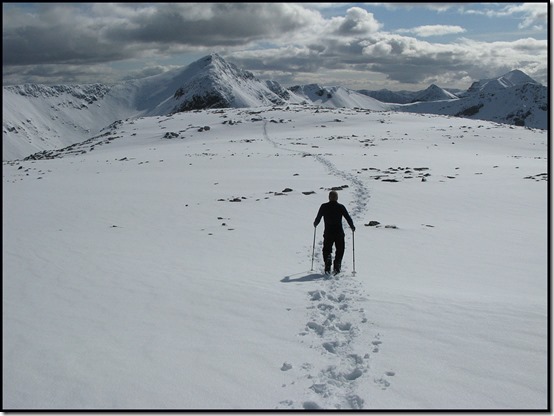 Apparently this walk is normally blighted by difficult boulder fields, so although the snow was deep and soft, we probably had much easier conditions underfoot than Conrad did yesterday. And we had about a fifteen year age advantage over Conrad (more like 35 years in Sue’s case!).

We're sweltering with temperatures in the mid 30's in southern Germany and you've got this much snow in Scotland? Strange things happening to our climate. Or so I thought until I read the date...

Good to hear from you Nick. Just keeping you on your toes!

Here is a copy of my reply to your comment on my blog, conradwalks.blogspot.com on this subject:

Phreerunner - your own recent post has made the point that I repeat here. There is an eight year gap in actual years PLUS the difference between my 76 and your "whatever". Most of my Munroing was done early or late in the year, avoiding school holidays, but now granddaughter duties are forcing me into using those times; would that I had had the obviously superb conditions that you had on your trip. I was even a tad too early to hear the deer rutting in the glens below as one tackles a fine high up ridge - an unforgettable and haunting sound and atmosphere.

Your post identifies your date as 15th April 2008 On that day I was lodged in a b-and-b in Penzance prior to starting my Land's End John 'o Groats walk next day.