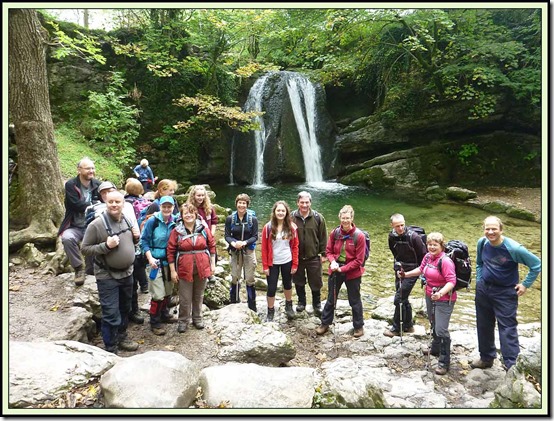 This is an annual event, currently organised by Sue B, with help from Sue W, who previously organised it for many years. It’s a reunion of the Sues’ University walking group. When I started coming on these trips there were lots of small children. Now most of them are at universities themselves…

There were about thirty of us on this year’s outing. Sadly Dick didn’t quite make it due to a fracas involving his car.

Saturday morning – we assembled outside Malham YHA annex, wondering where to go as nobody had paid much attention to planning a route. But in a rare bout of efficiency, Mike had somehow acquired some lunch. 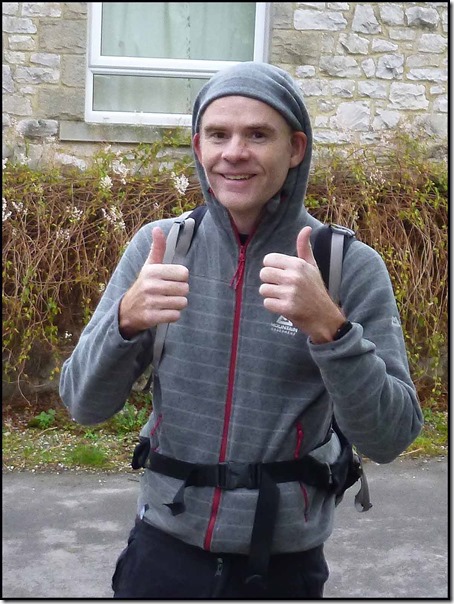 A fair number of people wanted to visit Goredale Scar, which would be easier than usual to climb by virtue of the long spell of dry weather, so about 25 of us set off to Janet's Foss. 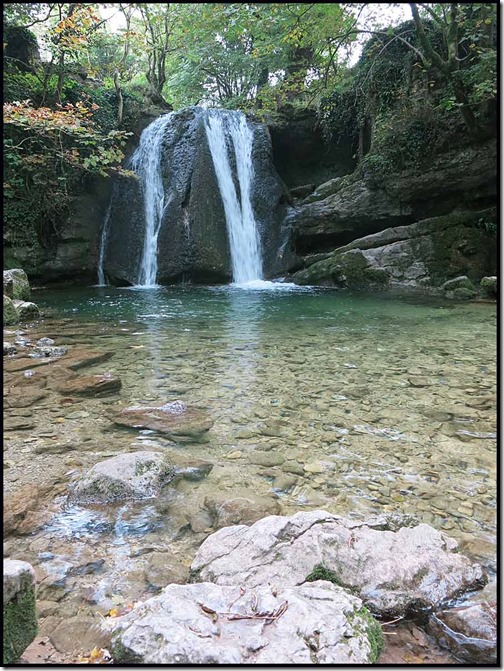 There was a mildly successful attempt at a group photo, shown at the top of this posting.

The day was heavily overcast, but with an earlier forecast of rain we considered ourselves lucky. Goredale had as little water in it as I can remember. 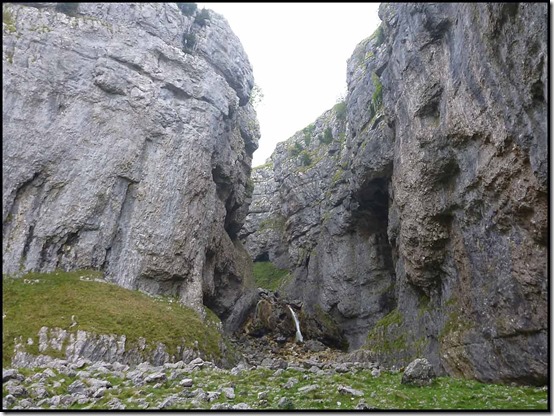 The slippery rocks at the bottom of the short scramble seemed to pose more difficulty than the scramble itself, which was very easy today. 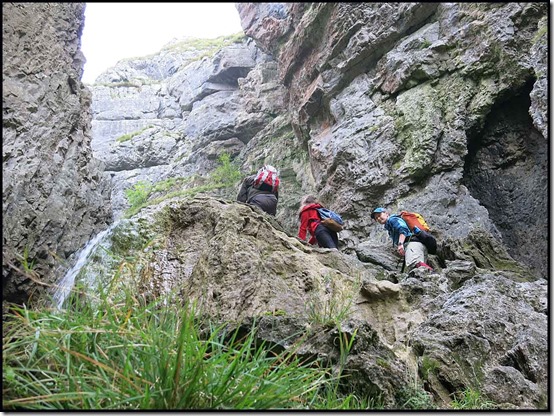 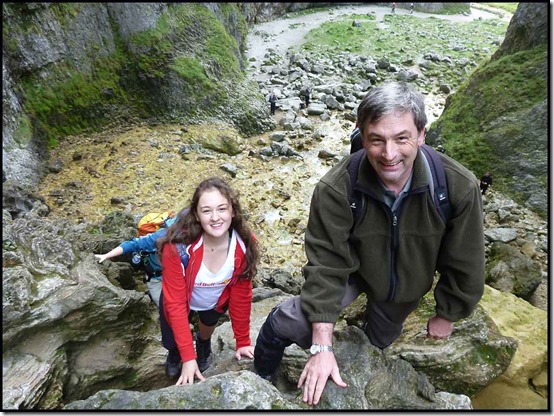 There was still plenty of time to chill out as about twenty of us clambered up the rocks. 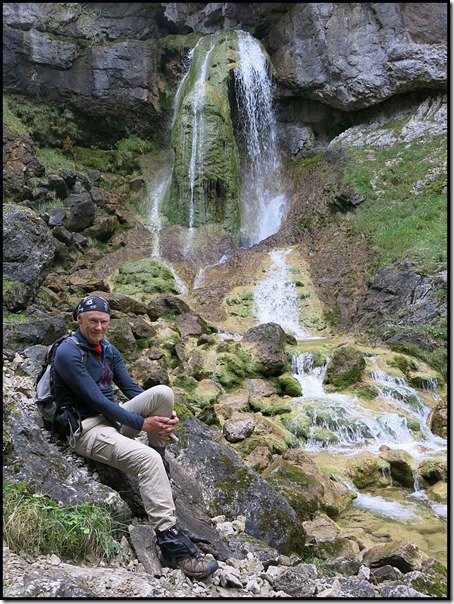 Then it was an easy staircase up to the limestone plateau. 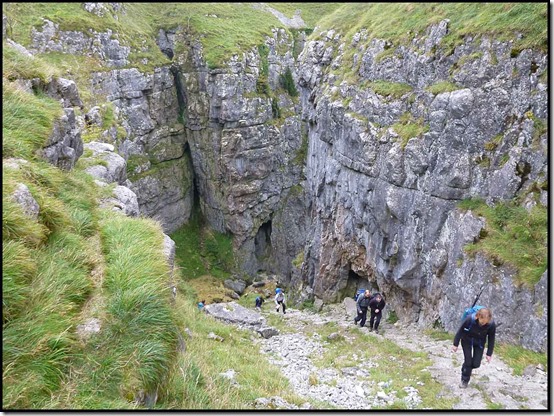 Richard and I enjoyed a walk along the pavement whilst most of the others preferred the grassy path. 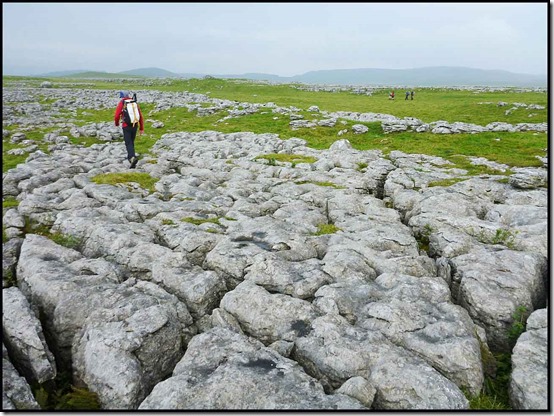 The others took a direct route to Malham Tarn, but Richard joined me on an alternative route via Middle House Farm. My last gesture towards ‘training’ for next Sunday’s marathon.

There was a view of Malham Tarn, under a thick layer of cloud. 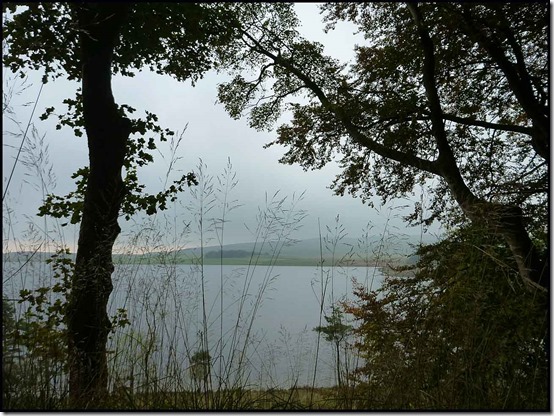 We soon caught up with the others, apparently descending on them from a height! 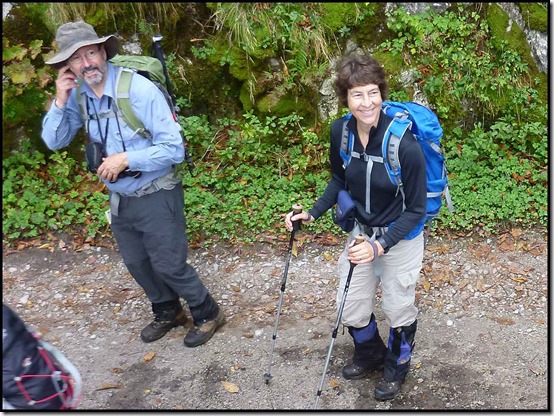 Pete and Mary swept past on their tandem, briefly swelling our numbers to about twenty seven. 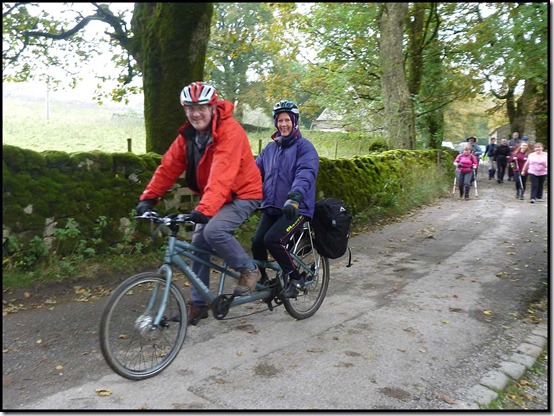 Some took a short cut beyond High Trenhouse, so by the time we stopped for lunch just below the cloud base near Black Hill, numbers were back down to about twenty. 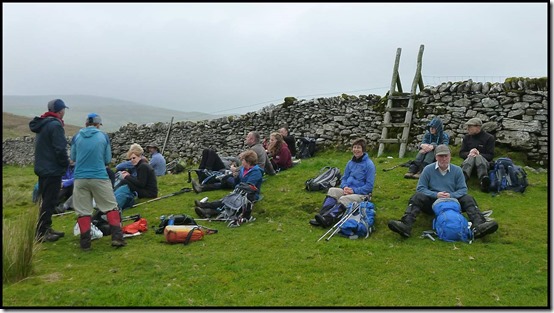 The path to Gorbeck was a bit boggy, but trail shoes (with a waterproof liner of course) were adequate. The distinctive outline of Penyghent was just visible through the gloom. We were following a group of students from Durham, who we encountered from time to time thereafter. A missing member of their group would later receive reports that ‘Aunty Sue, Uncle Phil and Uncle Mike were looking out for you today’!

We passed lots of tasty looking mushrooms. We would have appreciated Heather’s expertise here, but she was busy guiding a large group around the Three Peaks. 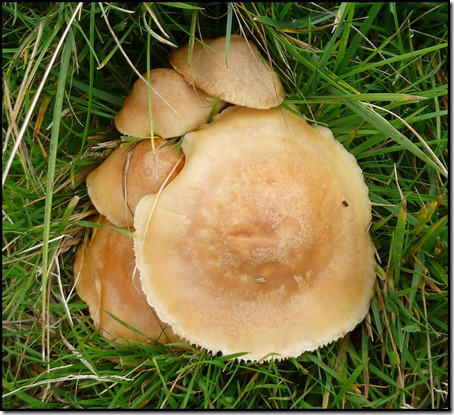 The ground conditions improved as we wound our way towards the caves above Settle, first passing Jubilee Cave then going up to Victoria Cave, now fitted with safety barriers and an information board briefly describing its use over the last 12000 years. 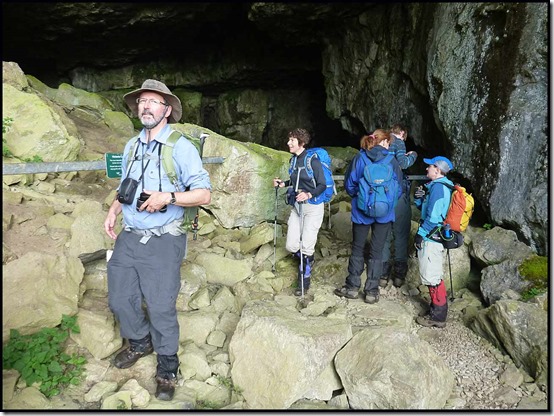 As we made our way along the good path below Attermire Scar, the cloud suddenly dissipated and the sun came out. 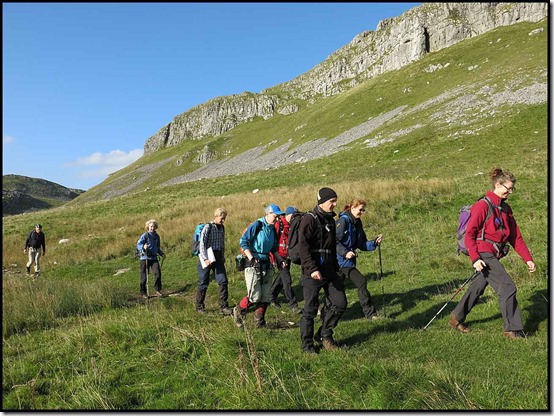 There was a fine view up to Settle Scar, and the resident cows were a picture of contentment.

A well camouflaged little owl flew off from a stile just as we approached. Later, vociferous tawny owls were seen around the hostel in Malham.

I joined Tom for a while on top of Rye Loaf Hill. Julie was apparently also there, but I didn’t spot her (she's very small, hiding behind the trig point?). 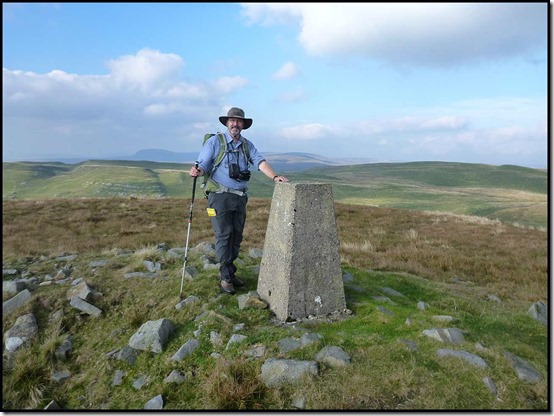 The main group was re-joined on Pikedaw Hill, from which we enjoyed a sunny descent to Malham in excellent late afternoon light. 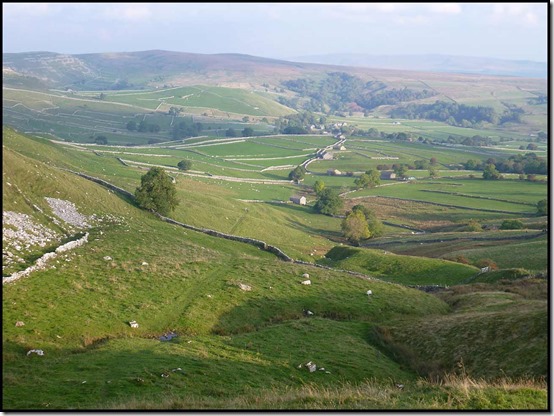 What a difference a bit of sunshine makes… 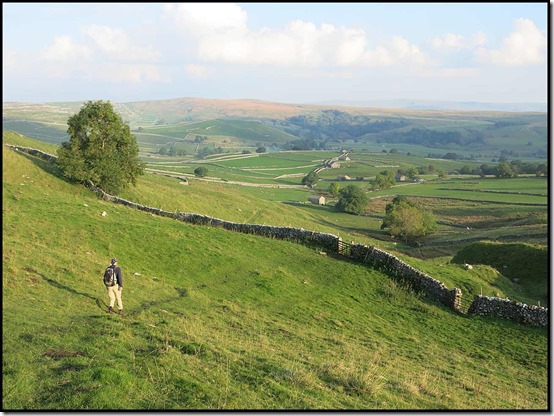 I was impressed that nearly 20 of the group had managed a walk of a good 24 km - rather further than usual, I think. 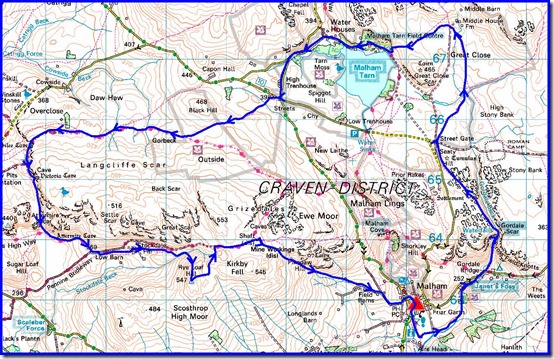 We ate in the hostel, where the helpful staff also provided a series of pots of tea for us in the lounge. Costs for the weekend – two night’s B&B plus evening meal was about £50 a head, so despite the YHA charges being much higher than they used to be, the cost was about half what might be paid for a B&B plus a pub meal.

Sunday – the poor weather forecast drove many people home, as it started to rain whilst we were chatting outside the hostel. Sue and I decided on a short walk from Grassington. Many readers will recognise the path shown below. 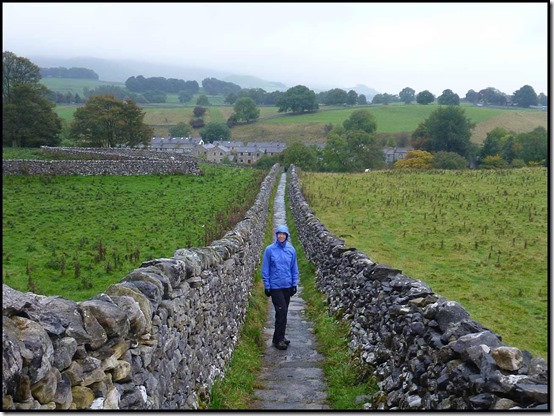 After all the recent dry weather the River Wharfe wasn't exactly in spate. 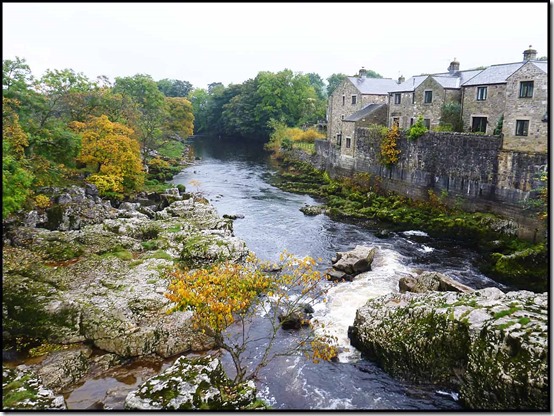 We strolled along the Dales Way path towards Hebden. Despite the gloom, there were some nice autumn colours. 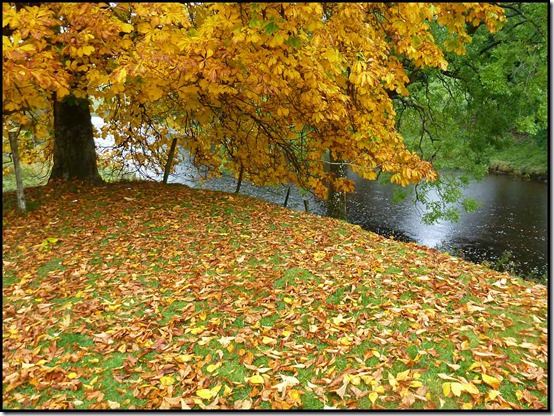 We took the path to Bank Top, then past Mossy Moor Reservoir, from where the good path led down to meet Hebden Beck by some mine workings where we joined a track.

A nice field path by-passed Yarnbury, and after a short stretch of tarmac we descended through more fields towards Grassington and past this relic. Curiously, we later saw an almost identical vehicle on the road near our house in Timperley. 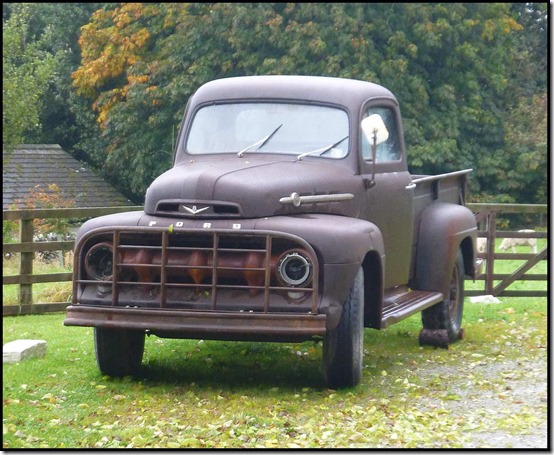 By the time we reached Grassington Bridge to re-join the Dales Way path, the sun was out. We watched a gaggle of kayaks descending the weir before struggling lower down due to the paucity of water. 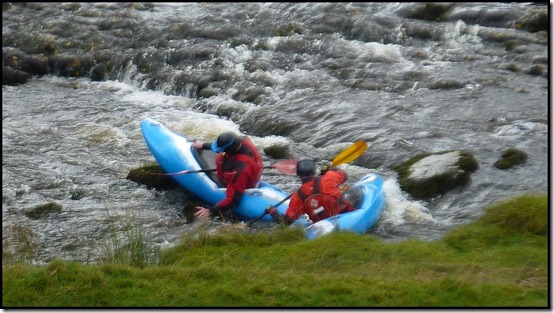 We left them to it and returned to Grassington for lunch in the sunshine. 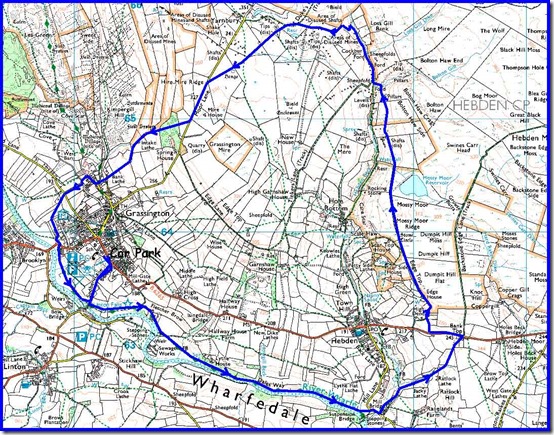 There’s a 64 image slideshow here. (I’m still struggling with Google+ and am looking for a better alternative. If only the old Picasa system still worked… ho hum.)

Other Ramsoc events are recorded here.

Thanks go to Sue, helped by Sue, for organising – which requires more work than you might imagine…

I find Dropbox good for doing slideshows on the blog. Also, if I want to put a photo into a blog comment I can do so with a link to it in Dropbox.

Yes Conrad, I noticed you using Dropbox and it was actually on my ToDo list to try. Makes sense as I use Dropbox for cloud backup.

Looks like you had 2 good days out. I like that old Ford F1 truck, it would make a good project for someone.

An excellent couple of days, Alan, and that would be quite a project, though the one we saw later in Timperley looked very similar and was running well.