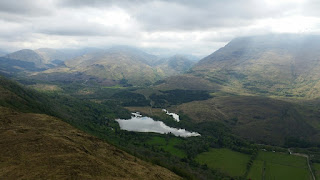 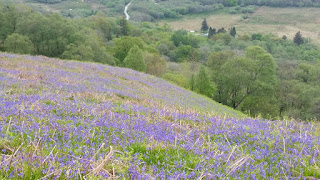 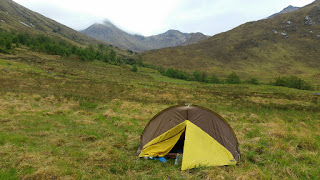 Weather: warm and still; gradually clouding over with light rain starting at noon. Waterproofs needed by 2.30, then steadily increasing pulses of rain ended in heavy rain whilst tent was pitched. Midgy, hence not many stops. Rain stopped later.

Not much Wiki today, you may be pleased to note.

Yes Gibson, I was tired yesterday, though I seem to have taken longer today to walk a shorter distance.

I turned off or hid my timepieces last night and once I'd killed the pain in my shoulder I found the pitch of the tent to be one of the most comfortable ever.

It had been light for a long time when I eventually gathered the momentum to produce a brew. The timepiece said 8 o'clock and I felt refreshed.

I started up Beinn Churalain soon after 9. Messages were received, contrasting from my daughter (a new and challenging job) and Alan R (who I was to meet tomorrow - possible tooth abscess - desperately seeking dentist). It was steep, with lots of Common Dog Violets, but with less water in my bag it was easier going than last night. I was alone with the grouse and the meadow pipits.

Churalain is a nice peak with a large cairn and good views, albeit hazy today with the increasing cloud. My route took a north easterly direction along a rough 3 km ridge with lots of easily negotiated fences. Easy enough and with good views to the route ahead (pictured top), but the descent that followed was reminiscent of yesterday's antics on Airds Hill. Rough going through a forest. The clearings were bright blue with a magnificent display of bluebells. There were also orchids, wood sorrel, stitchworts, wild garlic, celandine, bugle, cuckoo flower and more.

It took me three hours to cover the first 6 km of today's walk, so any hope of getting up Beinn Trilleachan was soon discarded. Its inclusion on my route plan was an erroneous last minute adjustment that blew apart my policy of a maximum of 25 km and 1000 metres ascent on a backpacking day. Otherwise I might still be walking far into the night instead of enjoying a good four hours at camp before the light goes and sleep beckons.

After that 6 km of rough going, during which i tripped on a tussock and bent a walking pole, it was nice to have a short stretch of tarmac in Glen Creran on which to regain my composure. Two people, the first I'd seen today, were walking towards me. It's a small world. I knew them. Les and Izzy are accomplished Challengers and erstwhile organisers of the Scottish reunion. They live in Appin and were out for a morning stroll. It was great to see them. They plan to make a guest appearance at some of the Challenge hot spots next week.

The car park looked familiar. I think it was here that we assembled a few years ago to celebrate Jon and Martin's final Munro, Beinn Sgulaird. Lots of Aberdeen Hillwalkers, pre XXL days, were hanging around in full midge protection gear for Martin. The group set off and was eventually caught by Martin, who we thought should know the way.

"You should have told me where to go" he complained "- I've never been here before!"

It started to rain. I lunched under cover of some pine and beech trees just beyond Glenure, where the buildings are being renovated, or even rebuilt.

A runner passed by. I met her later coming back down the good track that leads to Airigh nan Lochan. Waterproofs were donned over the t-shirt on the way up. It was warm and calm. It was from this Lochan that I should have turned off to ascend Beinn Trilleachan, an exceptionally rocky peak best known for the unique rock-climbing on its 'Etive Slabs'.

The slabs - unavoidable even for walkers - would be slippery in the wet conditions. Dangerous. Anyway, it was already 2.30 and I didn't want a late finish.

The next four km to Glen Etive were rough and slow. Some campervans were parked on the Glen Etive road. Alas not Mick and Gayle's. Rampant gorse is flourishing in the Glen. Rampant rhododendrons are being cut back. A small hut with a girdle of fancy cars announced itself as the 45° Mountaineering Club hut.

A review of contours had already led me to conclude that a lower than planned camping spot may make life flatter and easier. So soon after crossing the River Etive I stopped for water at a convenient stream and didn't have to carry it very far to this flat site not far from the river, at the foot of the path to the Robber's Waterfall, the pleasures of which I've postponed until tomorrow.

The pictures should be self explanatory.  There's no phone signal in Glen Etive, so apologies for the delay.
Posted by Phreerunner at 12:05

Sorry I wasn't in Glen Etive! I would have seen you at Bridge of Orchy this morning, except that I woke up at 5.20 and realised that the forecast wind and rain hadn't arrived yet, so I made haste towards Killin and grabbed myself another tick on the list. I'm guessing you'll have drunk tea in the B of O Hotel, in the absence of Bertie still being there.

Beinn Trlleachan! Looks like a planning aberration to me!

But an interesting move from one valley system to another. Of course you mentioned FWA so probably the original pan was something different?

Yes, those multi-course dinners on the trail are so rewarding!

I took my FWA Paul. Trilleachan was indeed a planning aberration of optimism.