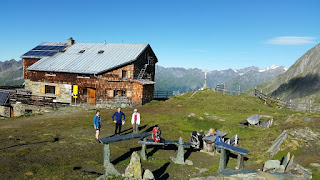 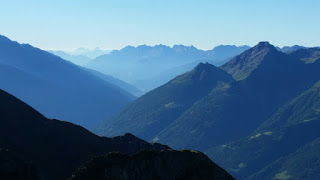 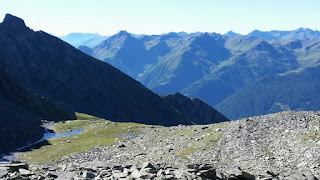 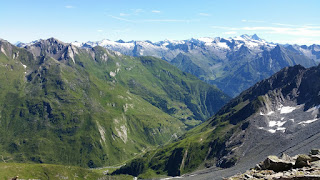 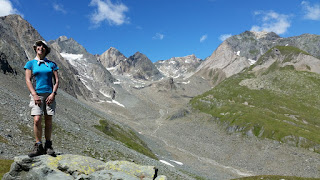 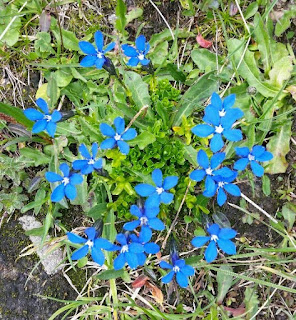 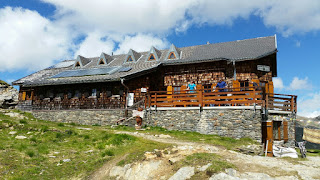 Waking to a perfect blue sky day, windless and warmer than yesterday, we were breakfasted and away by 8 o'clock. There's no packed lunch option here but they are happy for us to make butties from the breakfast buffet. The food is excellent, with last night's choice of three desserts luring most guests into having a bit of each.

After exploring a small chapel near the hut, we set off along the path to our first col of the day, Kalberscharte. Shortly before reaching that, a path left the main route to climb the 3070 metre summit of Rauhkopf. The others were intent on bagging this minor summit. I joined them until the rock became uncomfortably steep. So I'm sitting now in bright sunshine - no shade available - in the rocky coire between Kalberscharte and our next obstacle, Galtenscharte, from which I'm led to believe will be the trickiest descent of this entire trip.

The third picture down is the view from my rocky stance deployed whilst I waited for an hour and a half for the others to climb Rauhkopf.

Once they reappeared, it was a short boulder hop to the Galtenscharte and some photos (fourth down, featuring Grossglockner) before the long descent via lots of essential wires. This was the crux of the entire trip. Great care was needed as we slowly moved down the rock face. Right at the bottom we met a group who were about to ascend. They kindly waited until we were away from the  bottom wire. On we wandered, across much easier ground with kidney vetch and forget-me-nots taking the place of the spring gentians and edelweiss of yesterday.

Two lunch breaks were needed - Sue is pictured with our view from the first of these.

Towards the end of the walk, a 400 metre climb to Badener Hut (pictured - bottom) took us through a zone of fleabane and fragrant red clover interspersed with ubiquitous harebells.

Writing this has become increasingly difficult as there are two resident guitarists and numerous vocalists, featuring Cary who is sitting next to me. It's noisy Penny!

The flowers are spring gentians.
Posted by Phreerunner at 18:56