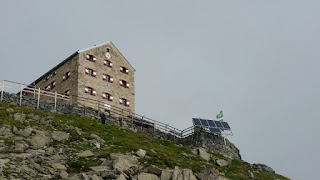 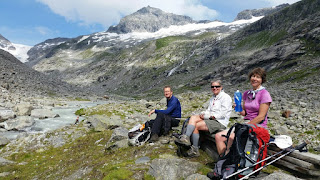 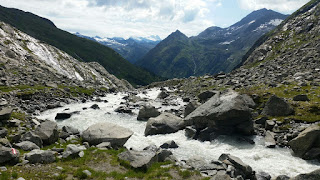 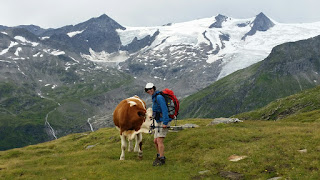 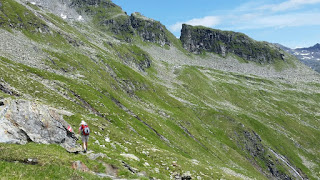 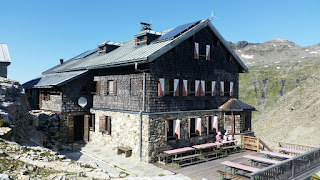 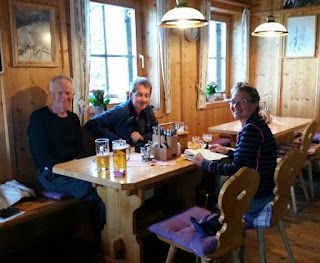 It was a busy morning for breakfast at the Neue Prager Hut. Not our favourite hut of the trip, but I suppose the remote situation of the hut and the nature of their clientele (mainly climbers, often novices, going up Gross Venediger) dictates a fairly rigid and impersonal regime. Quite a contrast to Badener Hut.

Armed with well provisioned packed lunches, we set off with a number of others at around 8.15 after Cary had suffered an unsatisfactory phone call with his bank.

It was unexpectedly spitting with rain. In fact the morning was mostly cool and cloudy, though at one point the sun shone brightly enough for lots of sun cream to be applied.

There were wired sections that dictated a slow pace on a day on which after leaving the main path at Alte Prager hut we only saw four people all day - on the river bed above Venediger Haus - presumably hunting for minerals. A brutal 300 metre ascent up a wide stream bed followed this near encounter.

A couple of tricky snow slopes presented themselves. Justification for bringing axes and crampons, although Sue was the only one of us who took full advantage, using her Yaktrax to cross a steep slope that the rest of us found a way around.

Lunch was taken out of the cool breeze at a path junction leading to Innergschloss.

The  weather then turned - into a glorious sunny afternoon. The shiny noses of curious sheep and cows were adored by Sue. The path contoured with gentle undulations on a superb belvedere route over mixed ground. From grassy corries to rough boulderfields, care needed at times; Cary fell off the path at one point. Ouch!

There weren't quite as many varieties of flowers on today's route, but spring gentians were fairly dominant. Lots of marmots were seen, as well as a pair of Bartgeier eagles, whose massive wingspans floated above us for a while.

Eventually we passed under some incongruous power pylons and found ourselves confronted by today's destination.

Tea and apfelstrudel were enjoyed on the sunny verandah whilst we waited for Cary, who was solving his banking problems lower down the path with the last vestiges of his phone signal.

We are the only visitors tonight and are almost outnumbered by the staff at this 'off the main drag' place. We have the luxury of two separate rooms, so nobody is resigned to a top bunk, and Cary is sharing with me.

There are no showers but the washroom does have warm water.

Best soup of the trip - many different vegetables - then bauerngerösta mit spiegelei (fried potato and bacon bits with an egg on top), followed by peaches cake. Excellent.
Posted by Phreerunner at 14:10