Walking Away, by Simon Armitage (Further Travels with a Troubadour on the South West Coast Path) 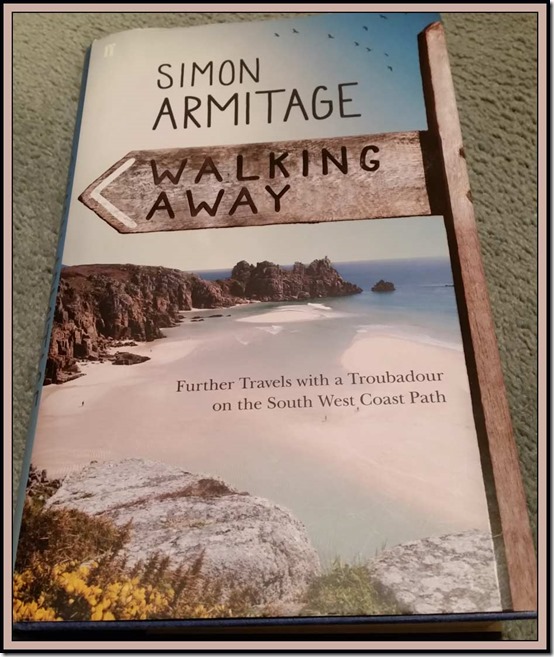 I don’t often read ‘proper’ books these days, thanks to a lack of shelf space and a very convenient electronic gadget, but Nell lent me this book before we went to Canada, and I’ve very much enjoyed reading it.

I still have to produce a compendium of our own visits to the South West Coast Path, which finished back in 2012, and that will have minimal literary stature compared with Simon’s offering. The Troubadour is Professor of Poetry at the University of Sheffield, and not somebody who regularly undertakes long walks. His walk is fully ‘orchestrated’ with his ‘Galapagos Tortoise’ (a giant case full of poetry books) necessarily being transported from B&B to B&B whilst Simon trots along the route with a variety of companions in a disintegrating pair of boots. The plan is to pay his way by giving poetry readings every night, after each of which a sock is passed around for donations.

His starting points each day are advertised so that he gains the company of random people from the previous night’s readings, plus a few longer term hangers on such as his wife, who appears from time to time, and a chap called ‘Slug’.

I don’t know the time frame for writing the book. Perhaps Simon had a notebook or a dictating machine with him, or a fantastic memory, as he captures every nuance of the walk. As a poet, he is entitled to ‘poetic licence’, and he demonstrates that on a few occasions, for example when he describes a blackbird singing at the end of September. No matter, his descriptive prose is consistently wonderful…

“The spilt mercury of the moon’s reflection extends from the head of the lake right to our feet.”

It’s absolutely crammed full of such prose, even when relating anecdotes about any number of situations and characters.

An excellent read, as was the other book Nell lent to me – ‘Dad You Suck’ by Tim Dowling. (Yes, I already got that message!)

Thanks for that - it will go on my to read list which is now way out of hand.