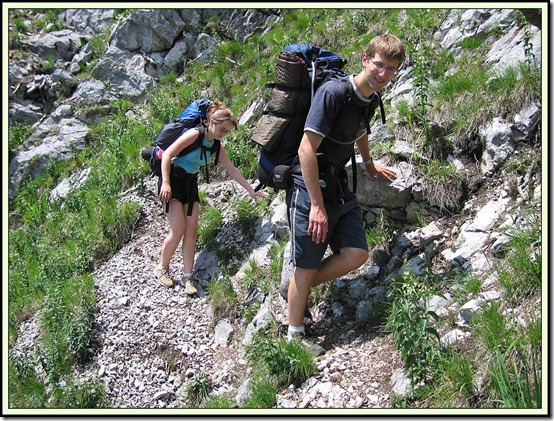 A slow start. I lay in bed until 7.30 then brewed up and ate muesli bars before shaving and slowly decamping. Meanwhile, Mark and Julianna went in search of food for our backpacking trip, which promised to involve a big ascent in the heat of the day.

We eventually got going at 10.45, past Kranebitten station and up path 214. Julie struggled a little to keep up. Frequent rests were needed. Mark had a huge load for the two day backpack, even after leaving stuff at the campsite. We did however ascend at a reasonable pace and reached 1100 metres, from 650 metres, after about two hours. But the path, already a narrow, steep single track, now skirted crags, with big drops. I went ahead to suss out whether it was suitable. Mark had sturdy trainers and Julie had town shoes. It was unfair to expect them to walk on very narrow shale above steep drops, so we decided to return to camp, stopping for lunch on the steep hillside, and picking up a few ticks for our trouble.

So by mid afternoon we were back at base*, having walked about 4 km with 450 metres ascent, in rather less than four hours.

The rest of the day was spent in camp, and we even watched some of England's ignominious World Cup defeat to Portugal (0-0, 1-3 on penalties).

The path we failed on was marked 'Nur fur geubte', so M and J are not 'geubte'... 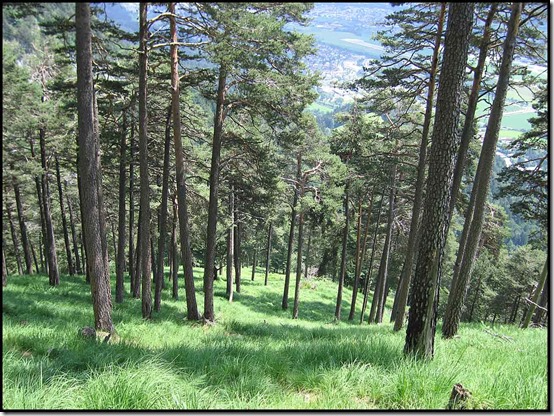 * This brought back vivid memories of an ill-fated attempt to continue an Alpine Pass backpack out of Kandersteg on 31 July 1982, when we were turned back by a snow storm and finished up re-pitching our tents in exactly the same place as they had earlier been dismantled, to puzzled looks from other campers as by then the weather was glorious.