'Summer in the Alps' Day 12 - Corvara to Matrei 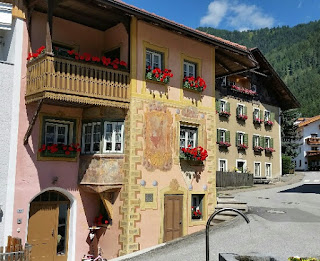 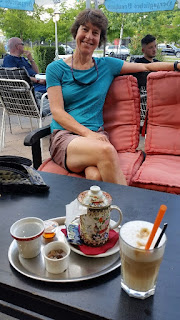 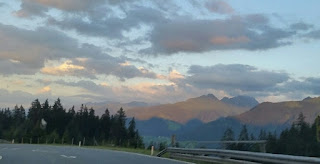 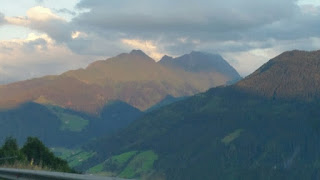 After recent exertions, Sue and I were happy to have a rest day, albeit involving a 360 mile drive from our base in the Dolomites to our new HQ, Matrei, in the Hohe Tauern region of Austria.

En route to Munich, on a beautifully sunny day, we had paused for our last elevenses in Italy for a while, at a hotel in Trens, shortly before taking the motorway over the Brenner Pass into Austria.

The top picture shows a house in Trens that features artwork by its most famous 'son', one Innozenz Anton Warathy, 1694 - 1758.

Lunch was outside a service station near some terribly scarred mountains. Not by avalanches as I first thought, but by extensive quarrying.

Despite heavy traffic we were early for EZY1887, which was just a bit late, allowing us time for a leisurely drink in a Thai café in Freising, a few minutes from the airport.

Leaving Andrew (who was on the same flight) to collect his luggage and sort out his hire car, we whisked Mike and Sarah off to the Hinteregger Hotel in Matrei, arriving at 9.20 after a nearly four hour journey that progressed from long queues of traffic to beautiful mountain scenery in the soft evening light.

Jo from Collett's was on hand to greet us and the hotel manager, Katerina, who we met here last year, was as jolly as ever and set about meeting all our needs, including beer, soup and a meat and cheese buffet.

Andrew arrived, a little flustered after his BMW's satnav had confused him by attempting to communicate with him in German, at around 10.30 - so beer o'clock for Andrew was later than usual. The rest of our group had all arrived safely, much earlier.

Friday 13th. We thought we'd got away without any more serious an incident than the repeated inability of our Skoda to detect either of our keys despite them both being next to the ignition button, until on arrival at Hotel Hinteregger we were directed straight to Room 101.
Posted by Phreerunner at 15:30