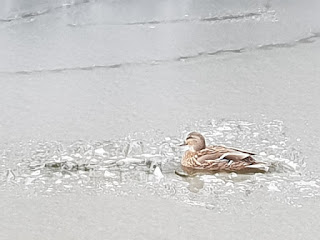 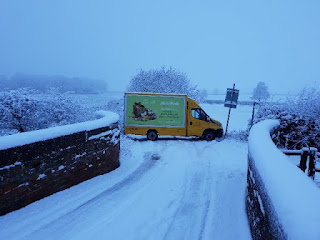 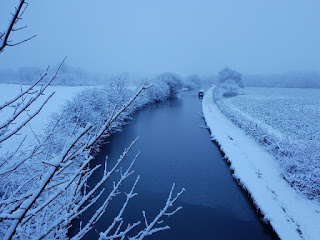 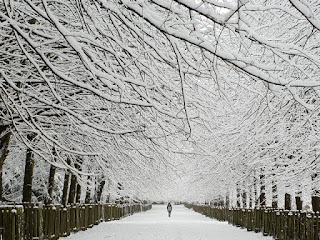 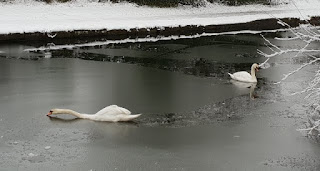 An early morning scan of the weather in Timperley didn't put Sue off cycling to work - that was the only way she could get there on time. It did however cause me to abandon a planned trip to Alderley Edge. A good decision as the traffic wasn't really going anywhere fast.
Apologies to anyone who was expecting to see me at the Wizard café.
It's a shame our cross country skis are in Canada, as they would have provided ideal footwear for my trip alongside the Bridgewater Canal to Dunham Massey.
The early morning snow had frozen into the canal's surface. The duck in the top picture seemed quite happy, but the swans pictured lower down were having a real struggle to get anywhere, and would have been unable to take off, poor things.
The van driver wasn't too happy either.
The walk took me some time due to frequent stops to chat with a miscellany of folk on the towpath, before I left it to walk through the grounds of Dunham Massey.
Onwards through the golf course to Altrincham. There were no golfers today, but there were many excited children armed with sledges. All the local schools had declared a 'Snow Day'.
Usually I get the tram back from Altrincham after this walk. But today the trams were foiled by a points failure so I took the back way home, meeting a procession of folk who had been abandoned by the tram service and were asking the way to Altrincham.
BTW the pictures are in 'colour!
Posted by Phreerunner at 11:10

It was a good day to be out. We got a walk in too. Our “big” schools were closed but the juniors were open. An inch of snow and England caves in. And I don’t mean the cricket. 👍