Lucky, Lucky. The two Pauls and I managed this short walk in the Cheshire countryside just before the rain set in.

This route was taken from Jen Darling’s ‘More Pub Walks in Cheshire and Wirral’. The Stretton Fox, a place with a long history that I haven’t time to go into now, is a good place to start and finish as it has a huge car park, and it served adequate coffee and soup after we’d finished. 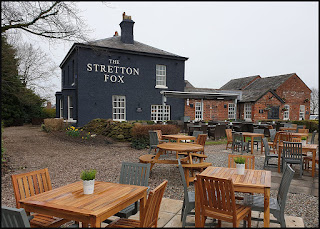 The Stretton Fox is at junction 10 of the M56, so only a few minutes to get to from Timperley. The walking route is to the south of the motorway, where we could admire the banks of daffodils as we entered Lower Stretton, taking care to go slowly. 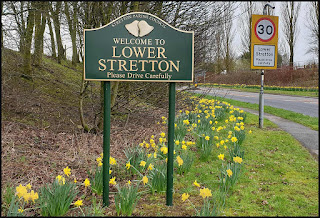 The Ring O Bells Inn is soon passed. This is an alternative starting point, but not as attractive as the Fox. Jen’s guide mentions ‘the unusual inn sign is a portrait of the late Tom Galley, a bell ringer at the nearby church for more than 60 years’. Sadly, his memory seems to have subsided to the pages of Jen’s book, as I don’t discern any reference to Tom in the current signage. 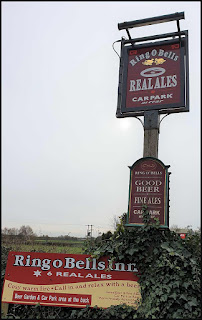 The walk passes numerous ponds and ‘mosses’ where peat has been harvested since the time of the Romans. We expected to see herons, but they were absent from our vision today. There were however numerous buzzards, and large flocks of lapwings and of carrion crows. Many other birds were also in evidence in this area, which must be rich in food sources.

The blackthorn (May) blossom was out, as can be seen in the view below. In a few weeks’ time the pond will be obscured by the leafy thicket. 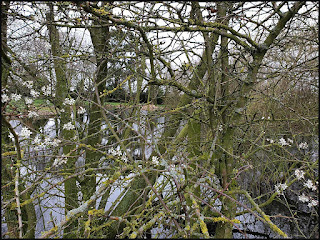 Soon after this, we paused for a snack, including some Wasabi, a crispy seaweed offering from the Korean supermarket, courtesy of Katrina. Thanks again, Katrina.

Here are my companions, on Stretton Moss just near some barns that were built in 1940 by the War Agricultural Committee – they were later converted into private dwellings. 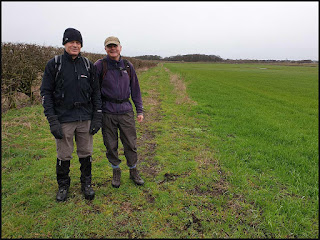 In the distance, a theme park lurked behind an array of forbidding signs and a racecourse training circuit. 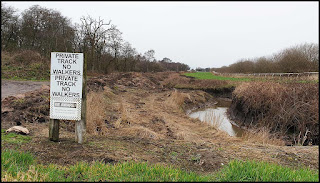 Moss Hall triggered memories of my first building site job, when I occasionally got the chance to drive a dumper truck like this example. 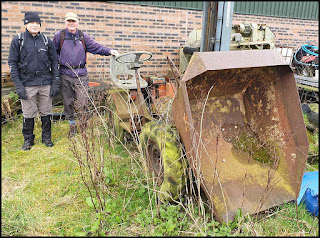 After about two hours on our feet, we were back in Lower Stretton, just making it back to the Fox Covert before steady rain set in for the rest of the day, as Paul and I peered out from our bowls of soup. 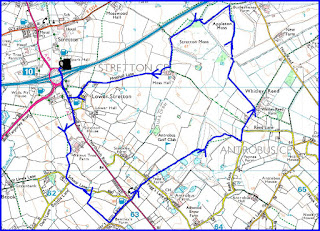 Thanks for your company, folks.

Next week it’s Stockport to Sale via the Mersey Valley. Start from Stockport railway station at 10.20 am for a 16 km or so stroll to a café in Sale. Trains run from Altrincham (10.00) and from Navigation Road (10.02).
Posted by Phreerunner at 22:13

Driving a dumper truck on a building site seems a far cry from your eventual occupation. You seem to have a never ending number of attractive walks within a reasonable distance from you home.

I guess your dumper is a Benford. I like the new seat.

I’ve been popping over as much as possible to catch up with your exploits. Unfortunately an elderly relative has been in hospital for three weeks now and since we are the only family local to her, time for our own outings and just about anything else has been limited.

Thanks, everyone. I'm sure the dumper truck may have been a Benford. It was a rare thrill to drive it as a schoolkid doing a summer holiday labouring job. Does that happen these days?

Yes Conrad, like you, we have many good walking areas very close by.

I sympathise, Gibson. Both Sue and I are more 'needed' at present - minimal summer holidays booked as yet, and I also struggle to keep up with 'blog reading'. Not to worry!