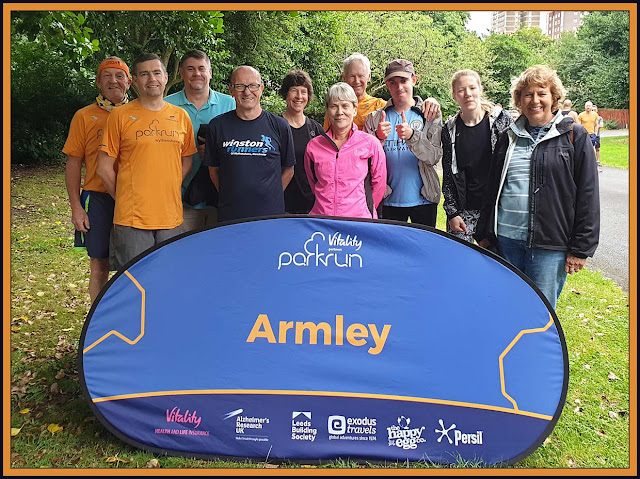 About a dozen Wythenshawe parkrunners and supporters dusted off their passports and went on tour to Armley Park, in the Yorkshire City of Leeds. What a fine set of specimens! 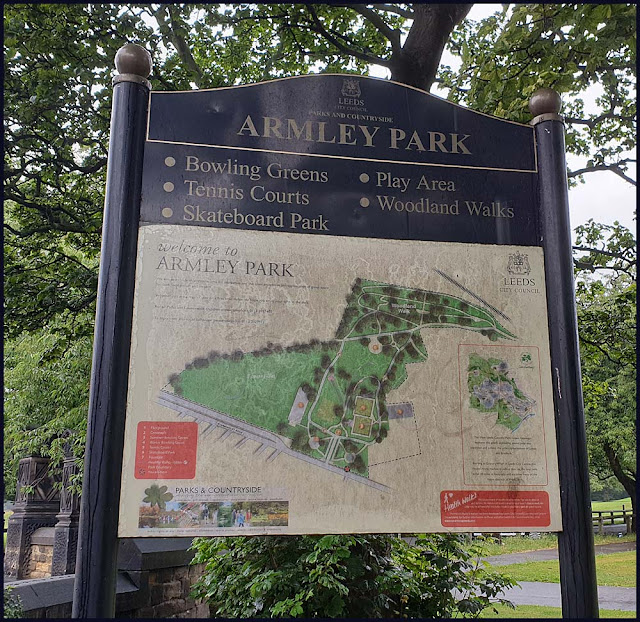 Sue and I arrived in plenty of time and strolled around the park in search of the starting point. A WhatsApp group set up by Jan gradually drew everyone to a satisfactory rendezvous, but not before Sue had admired the flower beds in the park, of which this was one of many. 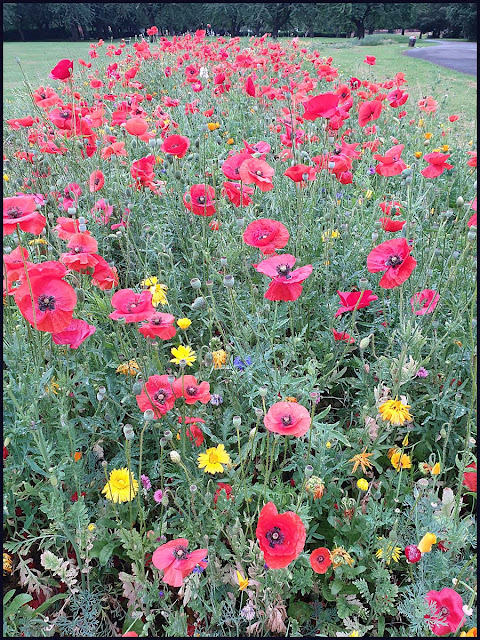 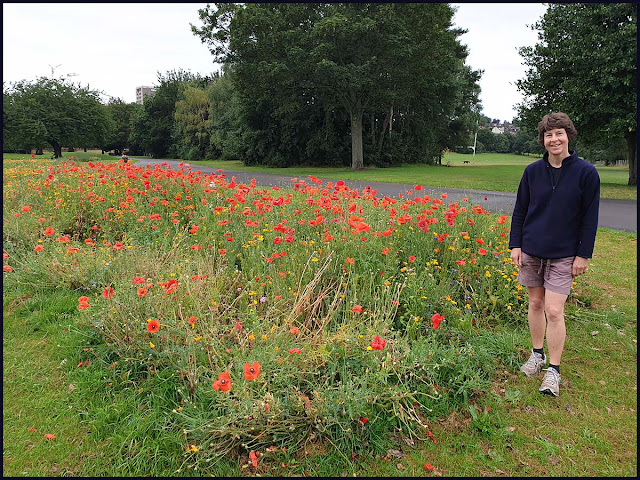 It's a three lap course, as always over 5 kilometres. Here, Annie is briefing Owen, with whom she will run, and Jan and Sue are raring to go. 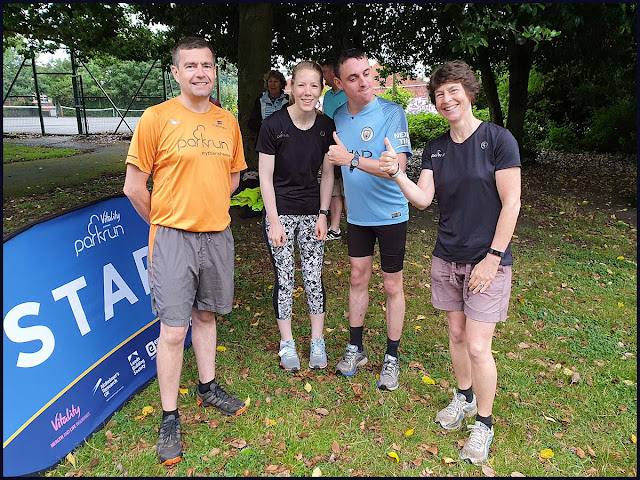 Then, all too soon, Jan finished, just a few seconds behind me in a respectable time, considering there were 'hills'. About 20 metres of ascent in total doesn't sound much, but with our old legs... 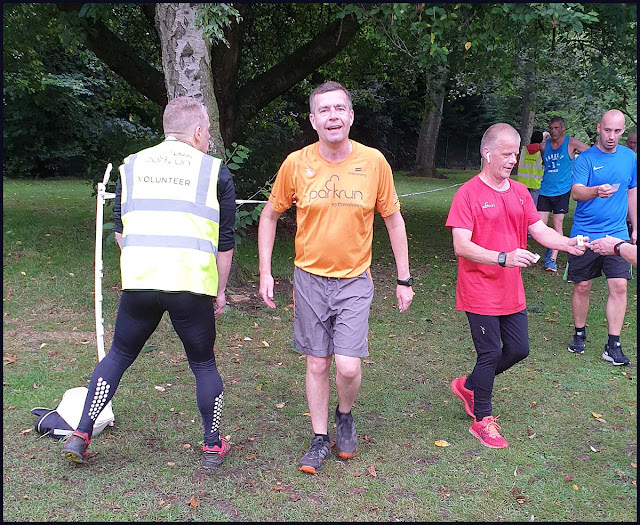 Jan and I had lapped Owen and Annie, so we joined them for their third lap.
Very pleasant it was too. We had time to pause sufficiently to admire the views over 'Greater Leeds'. 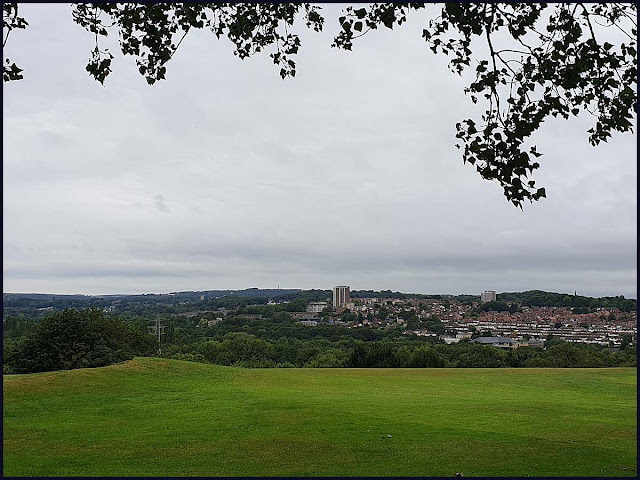 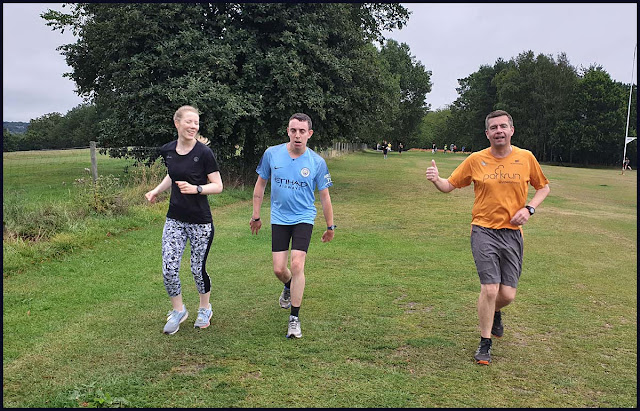 They finished in about 37 minutes and were still moving well, as indicated by the blurred images! 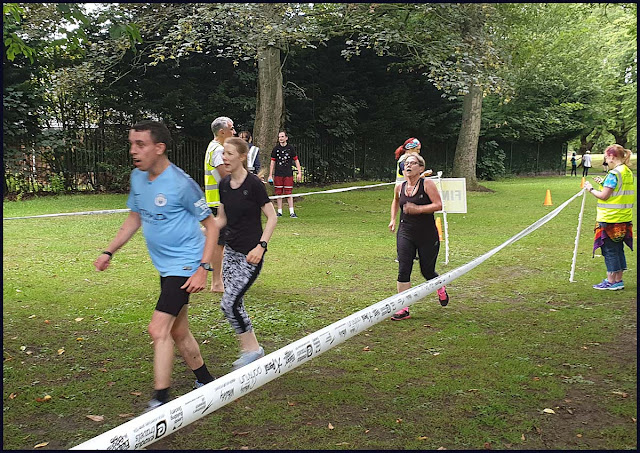 Full results for the 222 participants are here. There are more photos on the Armley parkrun Facebook page, here.
We all adjourned for a welcome breakfast at a nearby pub - The Malt Shovel, I think.
At that point it started to rain. It was still raining this morning (Sunday) when Sue and I drove round to Wythenshawe Park to take part in the 'Great Run Local' 5 km event that provides us with a bit of exercise on otherwise uneventful Sundays.
The picture below was taken from the car, about ten minutes before the start, when normally lots of runners can be seen warming up on the track. If you look carefully you might see one person doing just that. 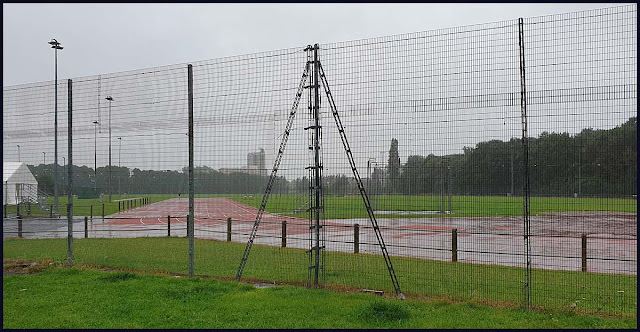 It was actually raining quite hard. We joined about thirty others under a small shelter before being shooed off to the start by a marshal. It's on days like this when the marshals really do need to be thanked. They stand around directing and encouraging people, whereas the runners can keep warm by running. Today both Sue and I went considerably faster than usual - I suppose we were just trying to stay warm! We finished by chatting to a group of 'hardies' in the rain at the finishing line, before returning, completely sodden, home.
Posted by Phreerunner at 21:08

When I lived in neighbouring Bradford in my early years Armley was known for its jail - I wonder if it still operates? Your photos certainly convey a more pleasant aspect.

It's still there, Conrad, though we saw no evidence...
https://en.wikipedia.org/wiki/HM_Prison_Leeds