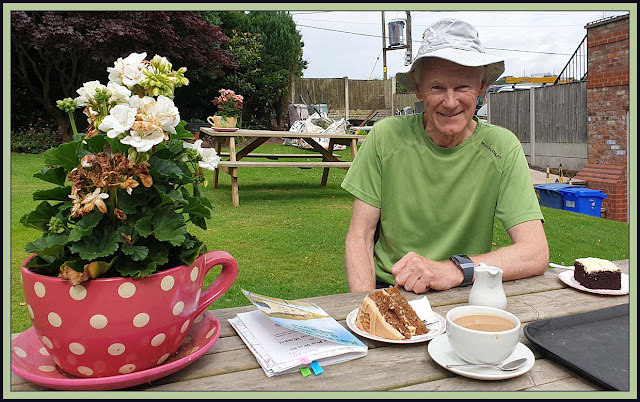 Paul B and I were the only takers for this pleasant stroll in warm weather close to home.
About 50 metres after striding off on our walk we came to an unpassable obstacle, the Dormouse Tea Rooms.
Duly satiated, our attention returned to the job in hand, as we sauntered out of the pretty village past cottages that date back to the 17th Century. 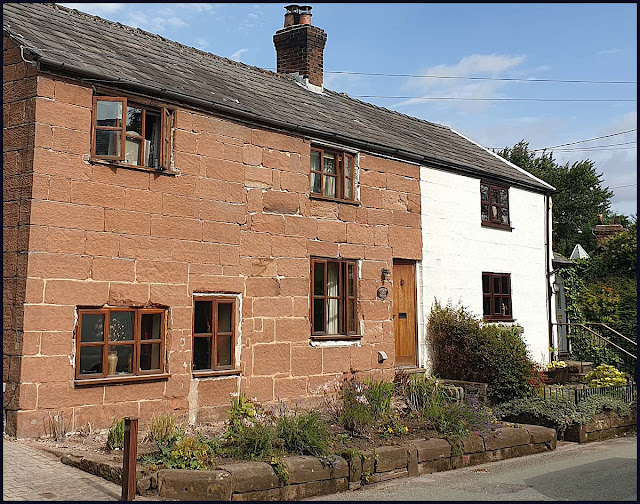 We had a mixed experience today of footpaths through fields of crops. Starting with this narrow route through a field of cereal crop. "Well done" that farmer. 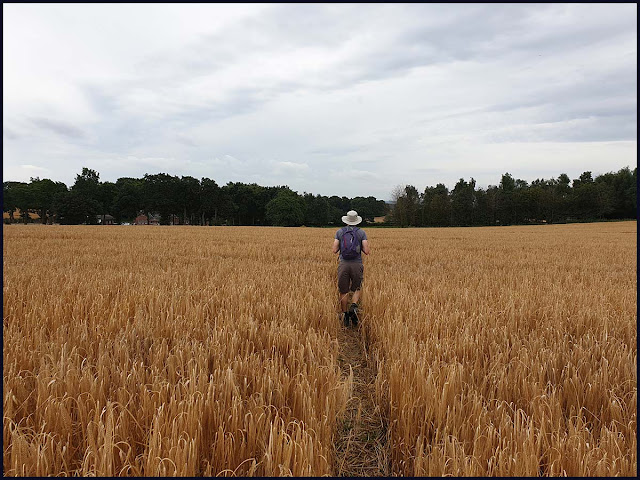 Our route was based on Jen Darling's 'Around Daresbury' in her 'More Pub Walks in Cheshire and Wirral' book, where a detailed description is available, or you could just follow the route on the map that appears at the end of this posting.
After passing under the M56 motorway, we wound our way past Little Manor Farm and Hallam Hall Farm to reach Morphany Lane near Morphany Hall.
On the right down here is the site of the parsonage where Lewis Carroll, born in 1832, spent his early years. There's a plaque, and some information boards, and I wrote about this site and its connection with Lewis Carroll in this posting in 2009. Click on the images below for more readable versions. 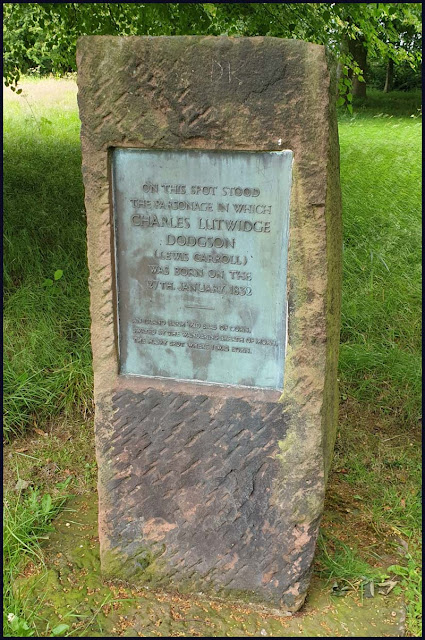 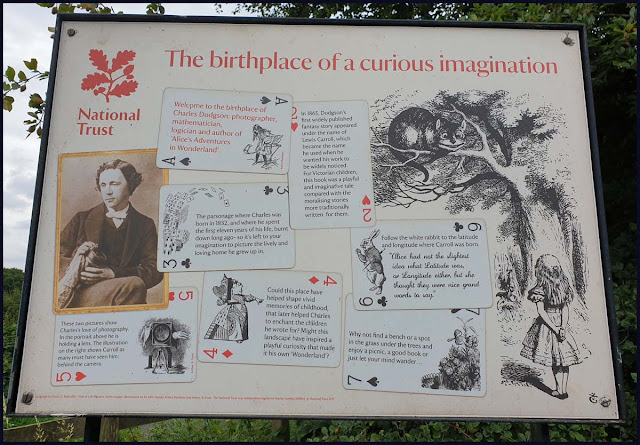 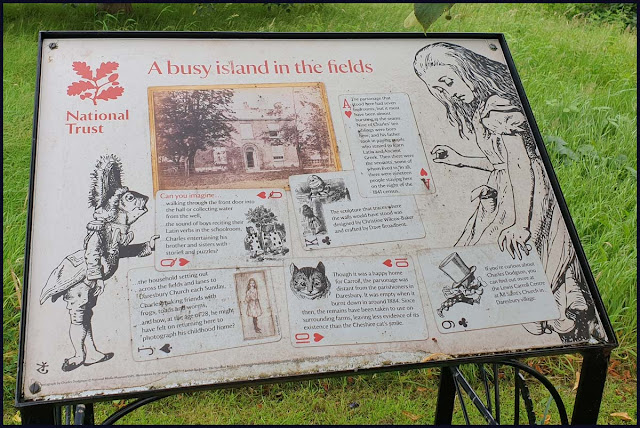 You'll see from my 2009 posting that the decorative ironwork over the parsonage's well is a more recent addition. The rooms of the building are laid out between brickwork on this meticulously maintained site. 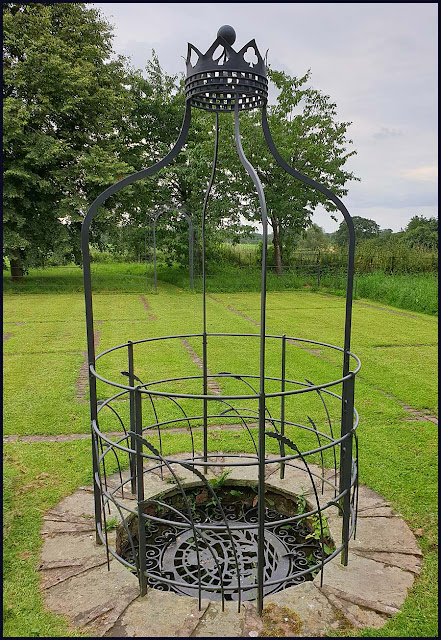 Moving on, a left and left again manoeuvre took us past Black Jane Farm, a Georgian building of symmetrical design, dating from 1729. They must have been neighbours of the remote parsonage. According to Jen, Black Jane herself is reputed to have been a swarthy-complexioned farmer's wife who brewed very potable ale! 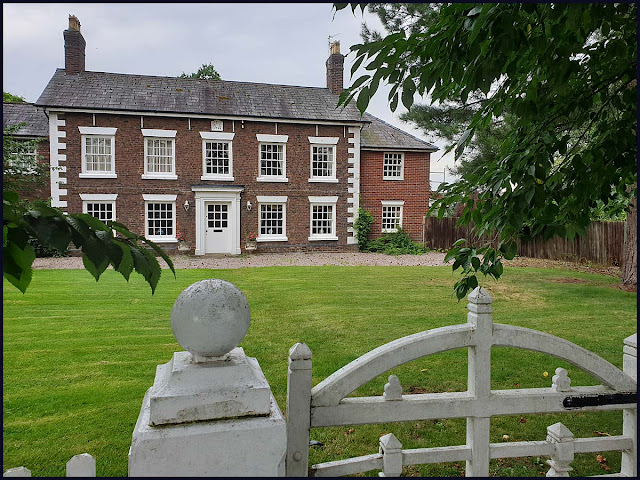 The approach to the farmyard of Queastybirch Hall was blighted by the absence of a proper path at the side of a ploughed field, but the chap at the farm who was laying concrete was jolly enough to share a joke. Then, after the path had joined the Delamere Way, the path beside a field of giant lettuces was even less discernible. 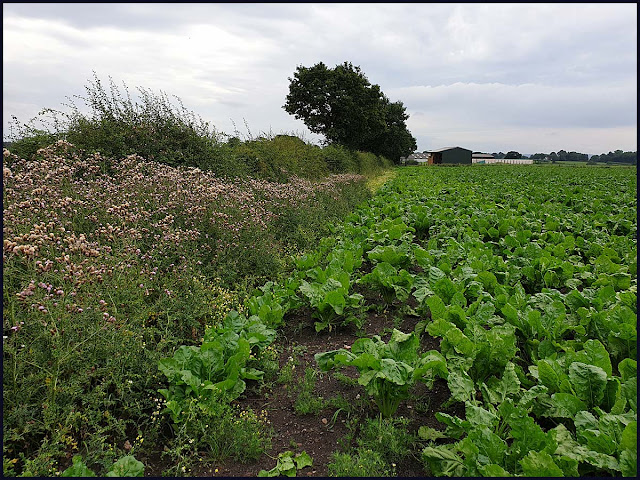 Steep steps led to a bridge over the M56 and to the village of Hatton, from which our 2009 walk was based.
We found a good route along Goose Lane and past Greenside Farm, to minimise road walking through Hatton, re-joining Jen's route at Hatton Hall. We then skirted a stream and followed several kissing gates to enter Row's Wood. This is where shorts were not a good idea, and we were both pleased to find a good supply of dock leaves. Nobody's fault other than the locals of Hatton and Daresbury, who clearly don't walk this path often enough during the nettle growing season. (A similar accusation could be made of me and Sue concerning the ginnel leading to the canal at the end of our road.) 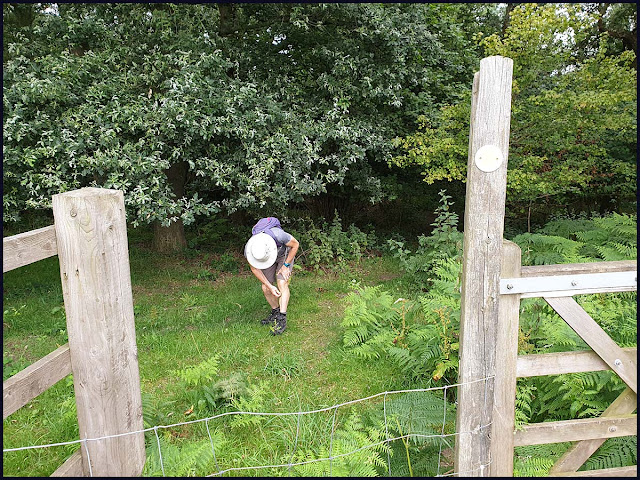 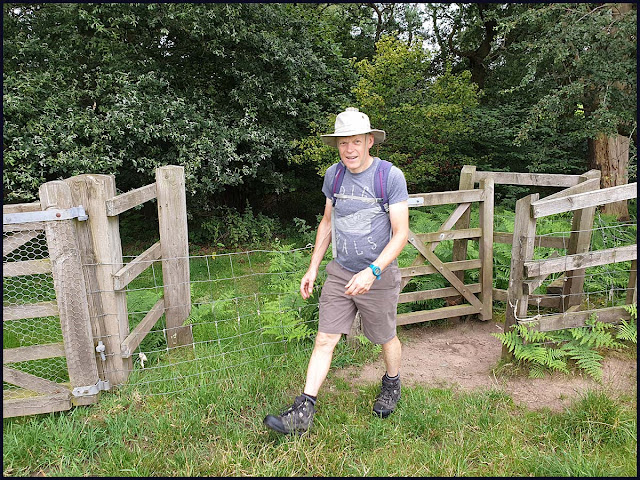 After this, it was a straightforward walk down Hobb Lane to the familiar sight of 'Duck Corner' on the Bridgewater Canal at Moore. We pass through here on our  regular Phoenix Park/Norton Priory bike ride. 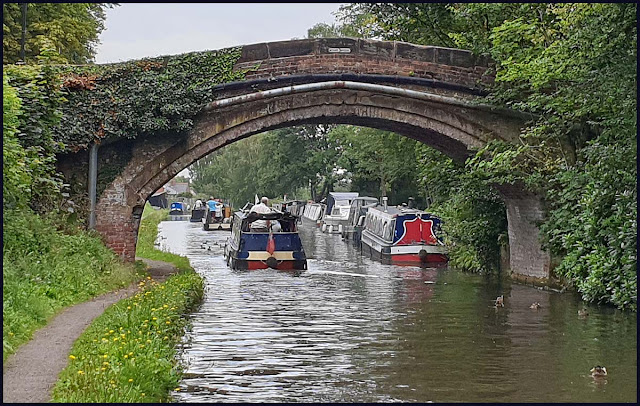 There weren't as many ducks about as usual. The ones who were there were looking very chilled in the cool water of the canal on the warm day. 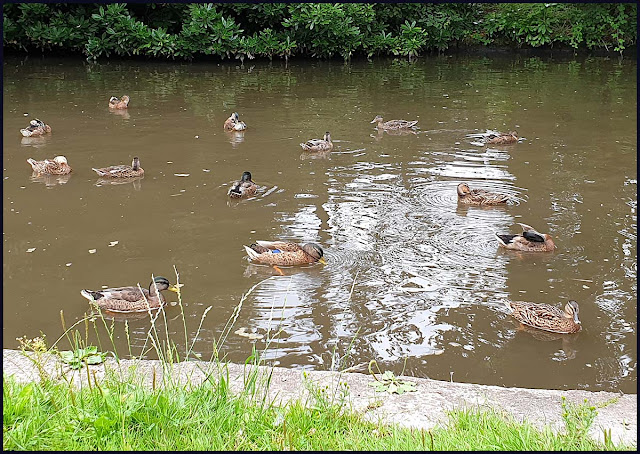 After just a short stretch of canal, we left it at the next bridge and found a lovely straight path through the crops, back towards Daresbury, with Daresbury Laboratory, opened by Harold Wilson in 1967, broadcasting its presence by way of the huge concrete cylinder of the former Nuclear Structure Facility which was based on a Van de Graaff accelerator. 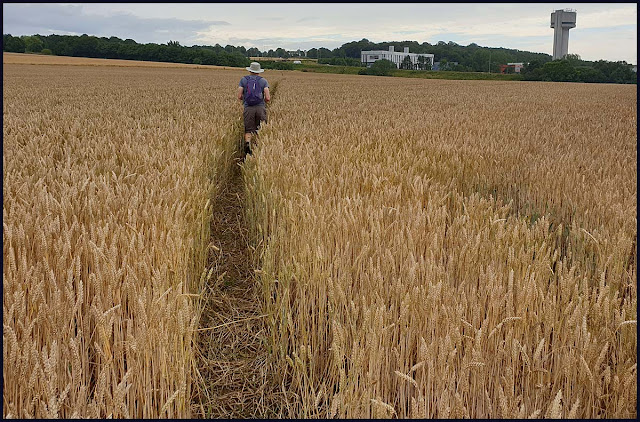 More nettles and brambles at the end of this field gave us a few final stings and scratches before we clambered up to cross the A558 expressway and take the path back to Daresbury.
Here's our route (click on the image for a better version, as with all these images) - 14 km with about 120 metres ascent, taking us three and a half hours including stops (two tea breaks as well as the tea room - it was a hot day). 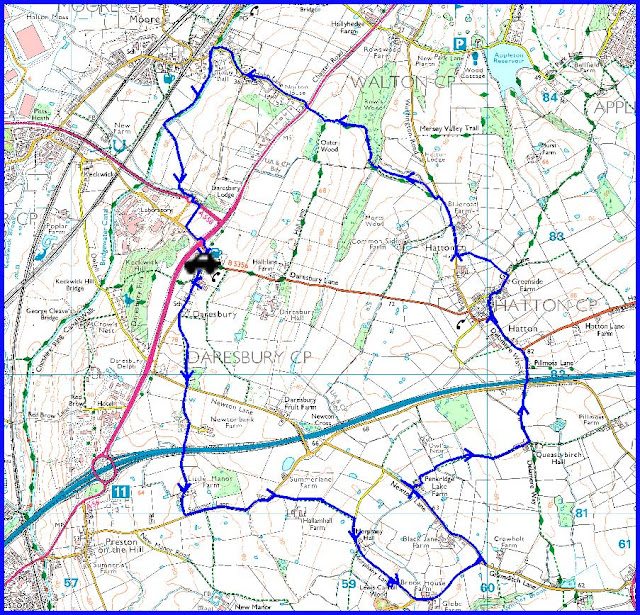 What a fine way to spend a summery Friday morning. Next week, on Friday 2 August, I'll be at the following venue, should anyone care to join me:
Lamaload Reservoir and Shining Tor. An 11km trip to the highest point in Cheshire. Start 10 am from car park at north end of reservoir (SJ 975 753).
Posted by Phreerunner at 17:38