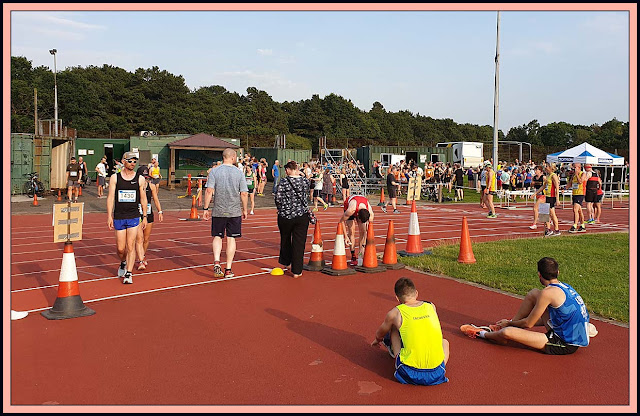 I'd never run a 5 km race before, and various people had suggested this one would be "fun". It was the third in a series of four races organised by Sale Harriers and taking place on the familiar 'Sunday' course at Wythenshawe used by Great Run Local.
I cycled down and arrived nearly half an hour before the start. What a contrast to the non-competitive runs that we are used to doing here! There were hundreds of people in club colours collecting their numbered tabards, which incorporate a timing chip, and warming up for the event. The top picture shows the scene about twenty minutes before the start.
The whole thing was very well organised, with goodie bags full of flapjack laid out for finishers to collect in due course. 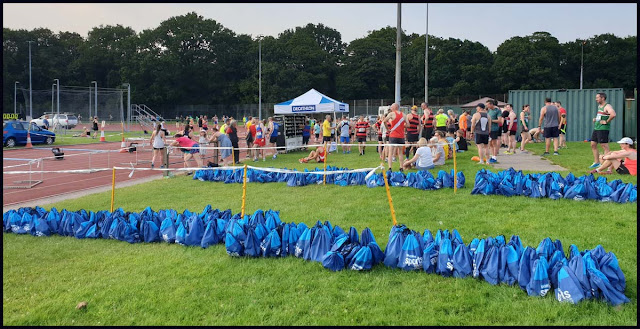 Still a few minutes before the off - there are some familiar faces amongst this lot below. You gather roughly according to expected finishing time - on Richard's advice I started well back to avoid being 'trampled'. 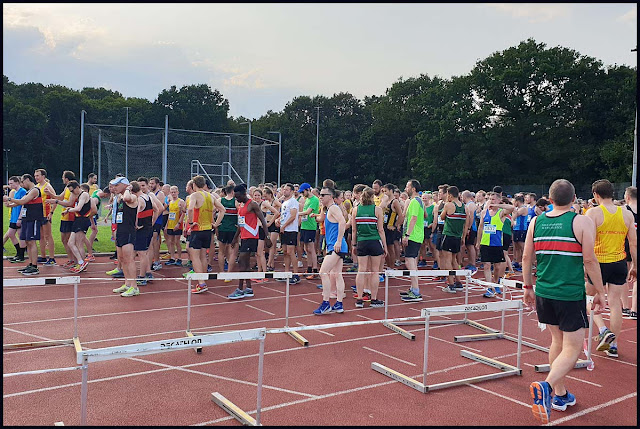 It was very hot and humid. Even cycling slowly for the 6 km from home had induced a lather, so the table laid out with many cups of water was most welcome both before and after the run.
It wasn't the evening for a fast pace, but people were racing. Whereas on the parkrun, many folk are happy to chat, here I got a rather frosty response (ie no response) to my attempts to open conversations along the route. "It's because they are racing" explained Richard later, after he had smashed his personal best despite the conditions.
I'll be running in the fourth and last event in this series in a couple of weeks, and I didn't want to set a difficult target time to beat, but even the slowish time of 23.59 was hard work in the heat and humidity. That got me to position 317 out of 676 finishers, and third out of eleven in my age category - about two minutes behind the first two. I was happy with that. The result came through pretty instantly - just a few seconds after finishing - by way of a text message. Very efficient, thanks to 'niftyTiming'.
I enjoyed a leisurely bike ride home... and a large beer...