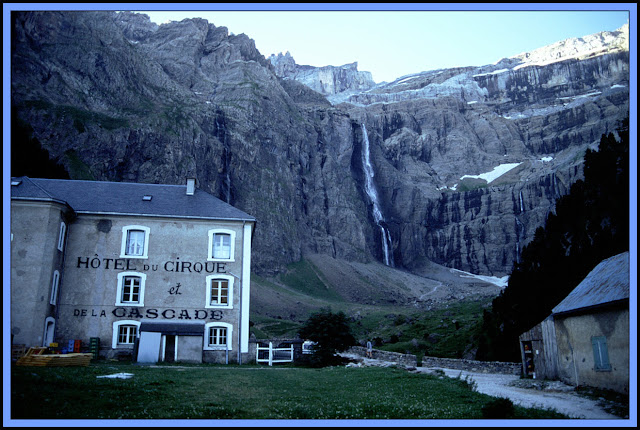 
A walk from the campsite at Gavarnie
Classic ascent of Le Taillon (3144m) via Cirque de Gavarnie, Échelle des Sarradets and Brèche de Roland, returning via Plateau de Bellevue – 10.25 hours, 18 km, 1800m ascent
Today we took a single ‘day sac’ on this classic ‘amble’.  This involved an early start – 7.30 – and quite a steep scramble early in the day.  By midday we had reached the Brèche, arguably one of the natural wonders of .  Then we went to Le Taillon, 3144 metres, meaning we climbed up nearly 1800 metres from the campsite.  ….And down again, with superb views of the Cirque.  The weather was absolutely brilliant and this walk is a class act.  It was great to have a day without a big pack, and whilst Martin was concentrating hard on the scrambling, Sue was leaping over the rocks, admiring the edelweiss.  From our summit lunch perch we could see to Vignemale and well into , including towards the , the largest canyon in .  The day was made complete by a superb hot shower (the first for three days) and a nice meal in view of the Cirque.

Diary Entry (by Martin)
After a quiet night by the Frenchman who doesn't snore, we were into action early, and left the site for the Cirque at 7.25 on another beautifully clear day. Soon Sue spotted a tree creeper, and the path through the woods to the Cirque was lined with agrimony, mullein, monkshood, etc, and paved with pony poo on which colourful dung beetles were on display.
After The Hôtel du Cirque, which looked completely shut pending arrival of the first day trippers, the path went up to the distinctive groove known as Échelle des Sarradets. 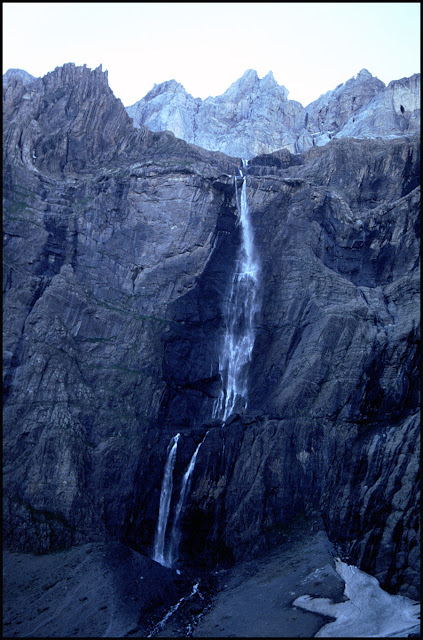 We swapped the sac over for the second time (200 metre - of ascent - stints with a 'day' sac) and I carried it up this exposed 'natural staircase' whilst Sue ambled up, observing edelweiss and ramonda on the way.
Near the top we met a huge group of people clumsily descending. We were grateful to our early start for avoiding them on the tricky section. All the time the sun was gradually peeping over the Cirque, but we knew it wouldn't illuminate the highest waterfall in (423 metres) until much later. 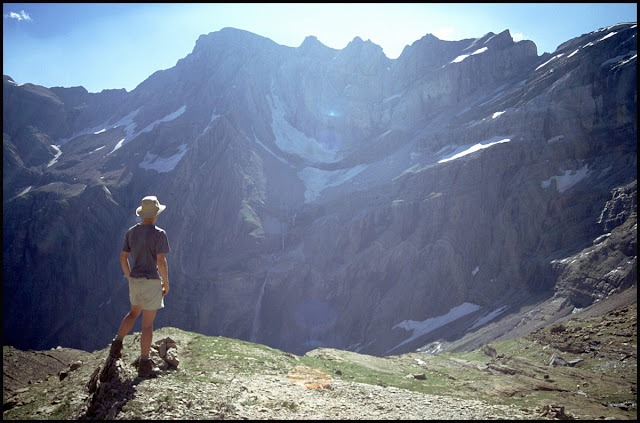 A welcome trail mix and chocolate stop at the top of the scramble prepared us for the delightful, solitary, walk up to Refuge de la Brèche, where we joined hordes of people who had started from a nearby car park, for the snow and scree ascent up to the Brèche de Roland - it must be one of the 'Natural Wonders of Europe'. 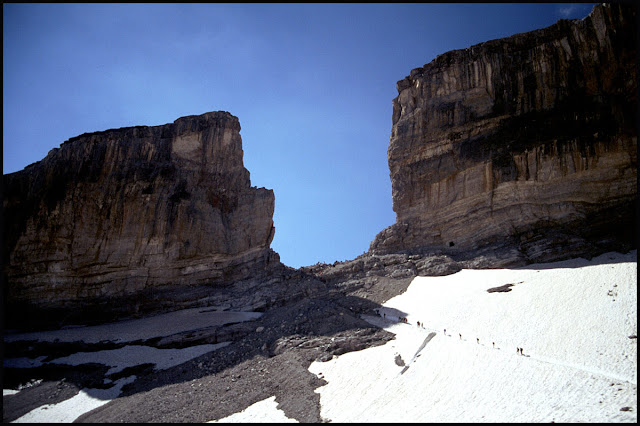 Once at the top of this remarkable geological 'gap' we looked in awe at the towering rocks - our cameras didn't have wide enough lenses - and continued westwards towards Le Taillon. It was much cooler higher up, but t-shirts and shorts sufficed until the 3144 metre summit was reached, whereupon an extra layer was used. Fantastic views - one man had his map completely out, blowing in the wind, so that he could identify some of the many landmarks in view. 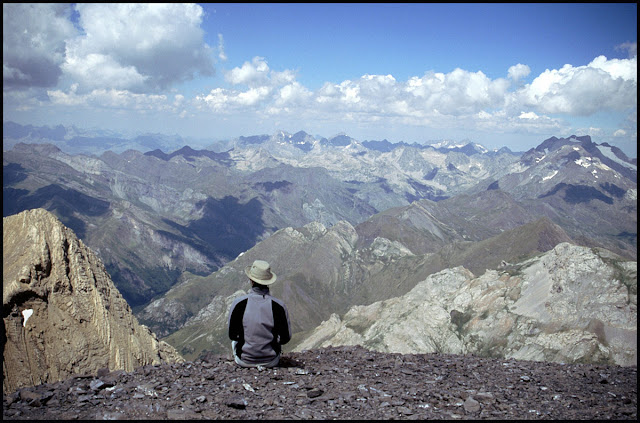 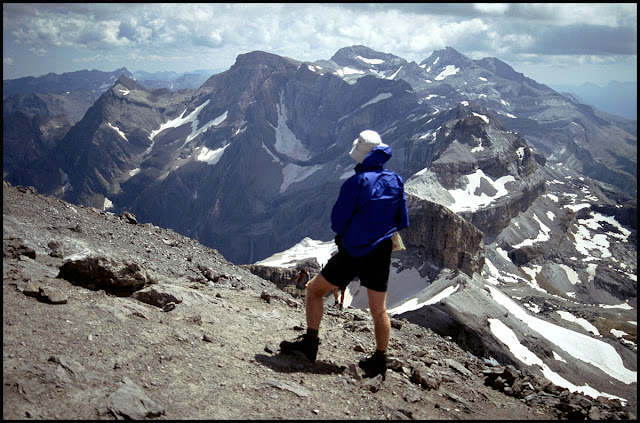 The looked tremendous. We saw campers high up on the Spanish side of the mountain. 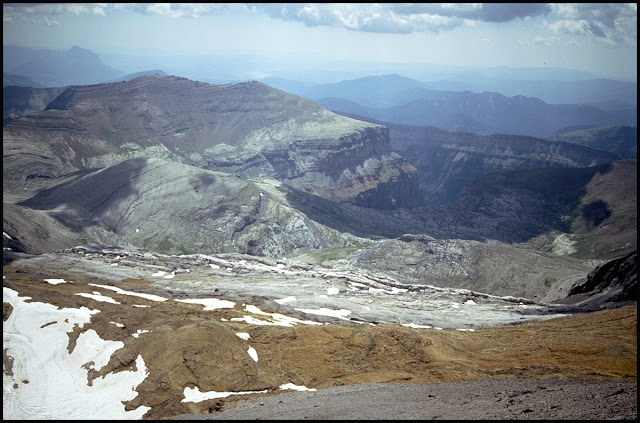 We found a sheltered spot by an eccentric Frenchman (hood/mobile phone/sumptuous meal/full kit) to enjoy the rest of a three day old baguette and our last tins of sardines and tuna.
A pleasant half hour with huge views all around on a wonderful day. Then easily down - met an English family below the Brèche, and soon left the hordes, to descend slowly and pleasantly to the Plateau de Bellevue (wonderful flowers, and views of the Cirque) and on to by 5.40. 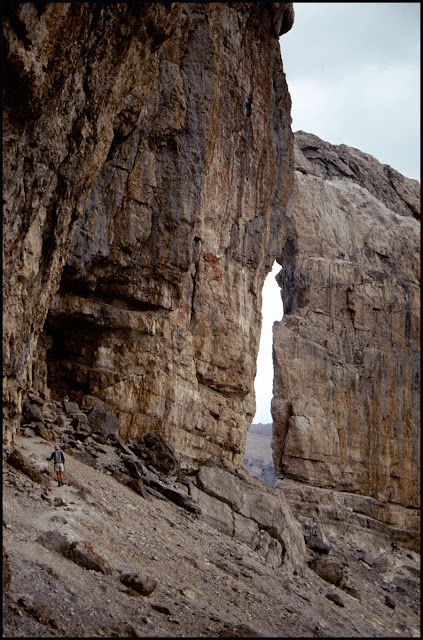 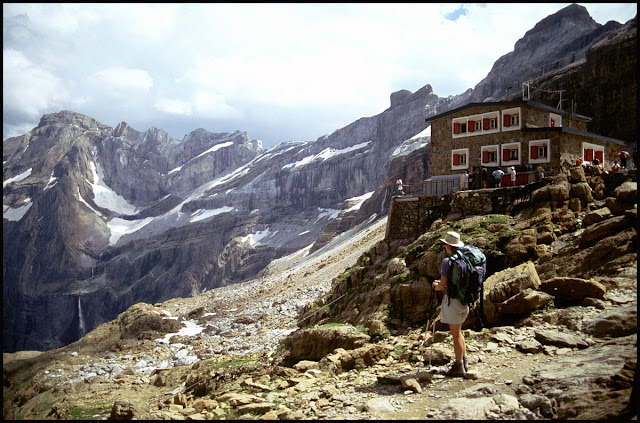 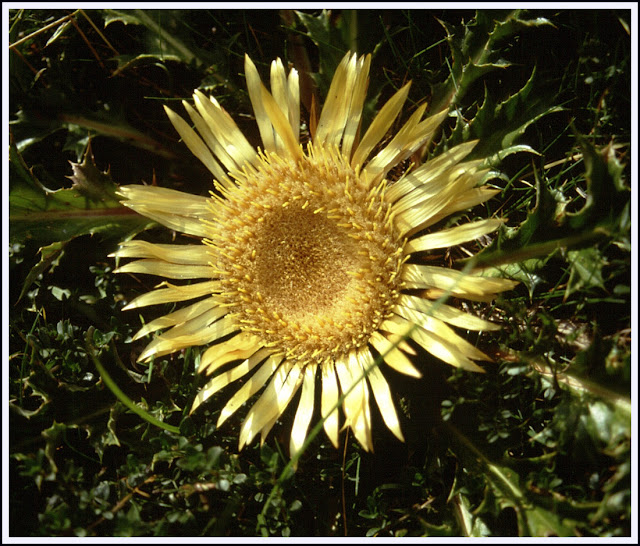 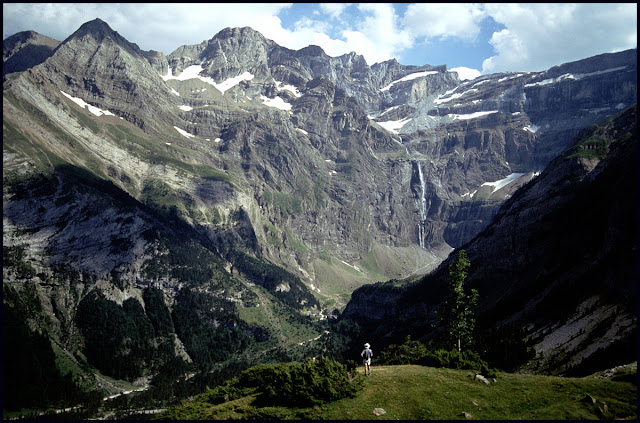 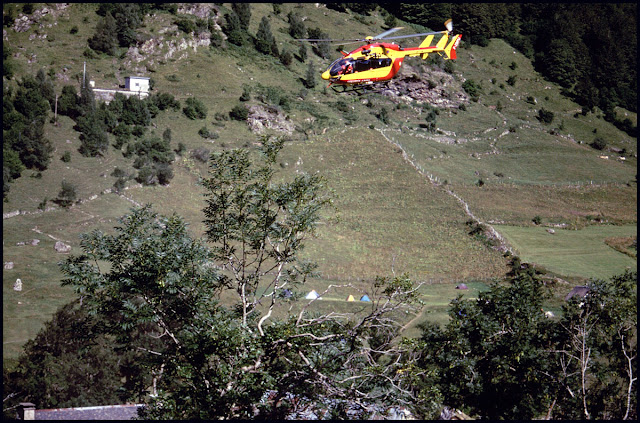 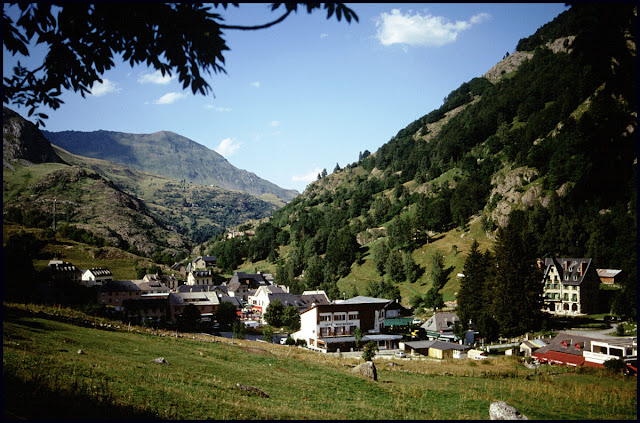 That's 10 hours and 25 minutes for the leisurely circuit. Plenty of time to shower, change, pass the time of day with English car campers and adjourn to Les Cascades for an excellent meal accompanied by views of the Cirque and the sound of Tubular Bells. Salads, turkey (S), rabbit (M), and the last two pieces of Gateau du Myrtilles!
Stats and route (Viewranger):
20 km, 2000 metres ascent, 10.25 hours 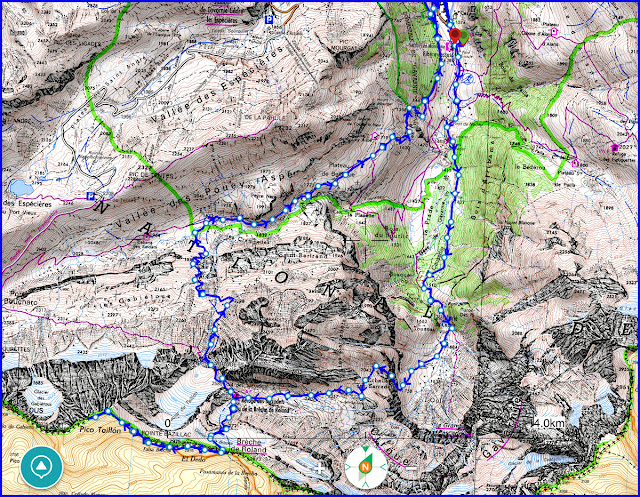