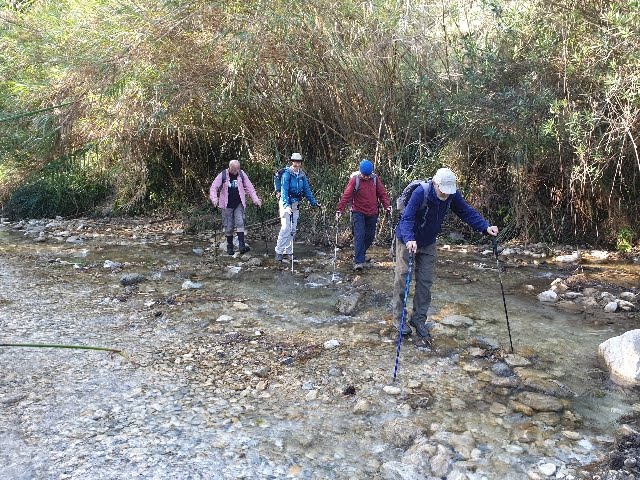 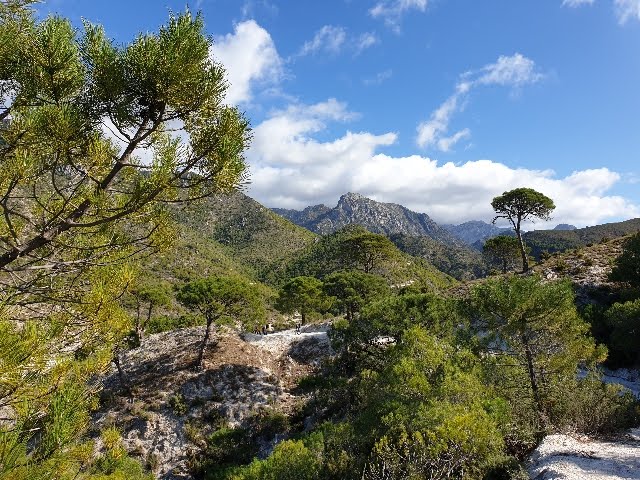 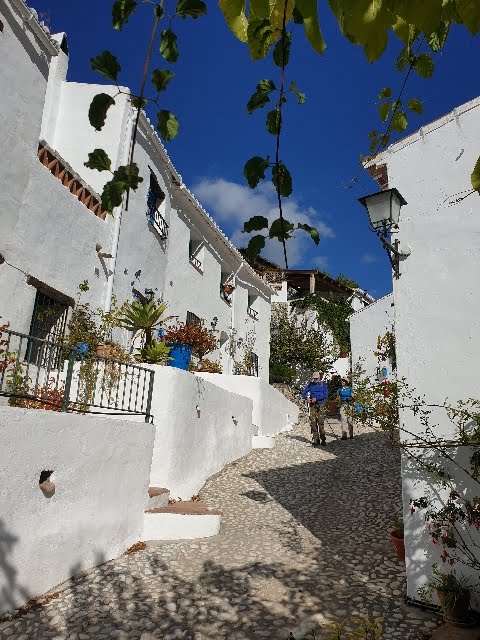 Today's 'hard' walk, whilst eschewed by Tom and Cary, saw 17 of us going with Mick to another Fabrica de Luz - this one the other side of Competa, some way down a gravel track.

We started through a ford then along a continuation of the track, before heading up a steep, narrow, scratchy path, eventually reaching a col, Puerto Paez Blanca, at 750 metres.

A gentle descent on a good path led to a ruin - Venta Cebollero o Cebollera - our first lunch stop, where butties from the hotel or the supermarket were despatched. Our flask of tea went down well. Nobody else has that luxury.

A narrow path on an old mule track beside and sometimes inside a dry river bed led us in another 45 minutes or so to the hamlet of Acebuchal. This hamlet was once used by partisans in the civil war, following which Franco sought revenge by evicting all the residents and removing the roofs of the houses.

In the 1990s some descendants of previous residents, Antonio and his wife, decided to renovate their old family home, and they encouraged others to do likewise. By 2005, the hamlet had been restored, with some difficulty and at a cost. Since then Antonio has opened a restaurant and acquired a couple of properties that he rents out. The restaurant is very popular. Initially a summer amenity, it is now a year round attraction.

Coffee/beer/tea and an assortment of cakes provided us with an ample second lunch in the busy restaurant in this attractive hamlet.

An easy track led back in an hour or so to the stepping stones across the river, beyond which transport awaited to return us to the villa in Canillas for the last time on this trip. Lovely views of Competa en route, good views all day in fact.

We then gathered outside by the pool. Some swam, others consumed wine and told bad jokes. It was all very jolly.

I'll concoct in due course a separate posting with this week's routes, and add more photos. Today we walked about 13 km, so far as I can guess.

Tonight our group of 26 will assemble for the last time for an evening of barbecue and tapas, before some folk leave for Malaga early in the morning while others of us will still be fast asleep in bed.
Posted by Phreerunner at 17:31