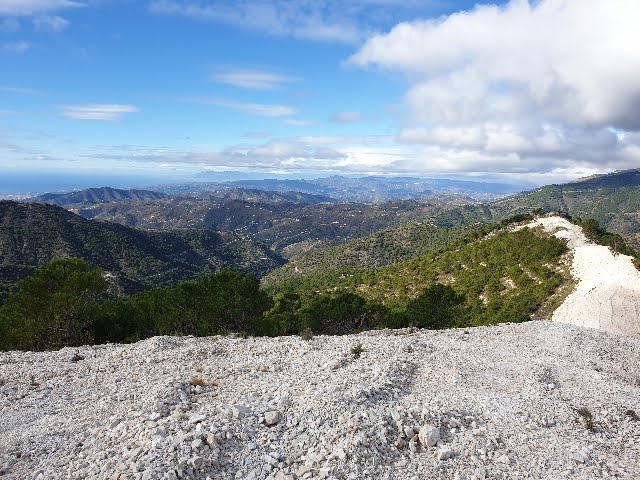 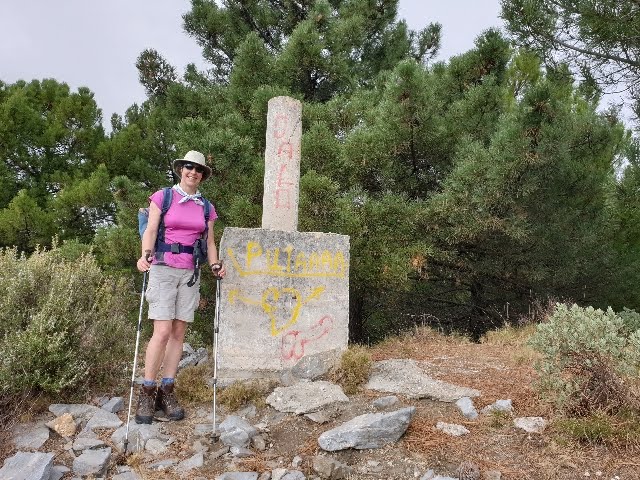 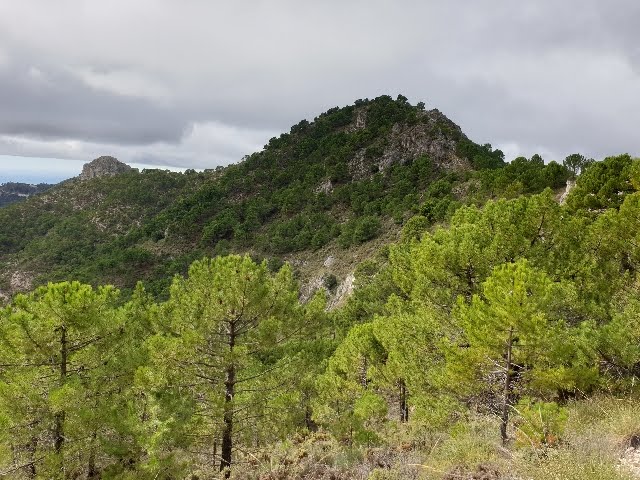 After an excellent meal at El Pilon in Competa - thanks to Lisa for that recommendation - we returned last night under moonlight with Tom and Cary for the two mile walk back to the Villa.

Today just 11 of us signed up for Mick's circular route from Fabrica de Luz to the 1326 metre summit of Cerro Verde and back.

The minibuses took us up 3.5 km to the start, where there was a hydro electric plant in the 1950s for ten years before it became a sawmill, (and now it's a summer campsite), leaving Canillas at 9.30 after our usual al fresco breakfast in the sunshine.

Lovely paths led steeply through pine woods laden with scratchy gorse, all the way to the summit trig point. On the way up we encountered a brand new fire break, the crushed rocks glowing white in the sunshine.

The only people seen on today's walk were a team from the Parc Naturel who were stripping the ground in another fire break. It's four years since the last serious fire; such events can be contained by the fire breaks and by water helicoptered from a nearby reservoir that came into view as we ascended.

Despite an imminent rain shower, from our banana break on the summit we could see the mountains of North Africa in the distance. Ravens circled over the nearby lower but less accessible peak of Cerro Atalaya. We could see down to the venta where we had lunch on the Silk Route.

An interesting rocky descent down a loose path took us over the only steep ground of note that we have encountered all week. Everyone managed fine despite a bit of light rain.

Despite being in pine woods for most of the day, views were generally very good, thanks to the sparseness and the dwarfness of many of the trees.

Lunch was taken beside the rocky path. Then we continued past caves that may once have been inhabited. This is an area where partisans opposed to Franco had some strongholds, and there are also some towers built by Franco's men in an effort to track down those partisans.

These days ibex roam the hillsides. We were lucky enough to spot a small group of them.

One cave definitely was occupied until not long ago - by a bee keeper. There would have been bee hives and vegetable patches, where there is now a sweet chestnut farm, with a walnut farm just a little lower down the valley.

The valley remained rocky and narrowed, with the path crisscrossing a small stream via slippery rocks, eventually emerging at the parking spot at Fabrica de Luz, where the small campsite that operates here in the summer was definitely closed today.

The minibus we'd left there only takes 8 passengers, so Mick took 8, and Sue, Cary and I strolled the easy 3.5 km back to Canillas.