Here’s a map of where we are going on this trip: 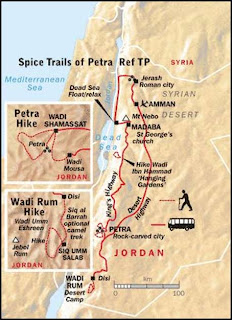 We rose to a clear blue sky at 8am and breakfasted with the group in the hotel restaurant, where we met Julie. She is the 15th member of the group and has been working as an anaesthetist in Amman hospitals for a charity for a couple of weeks before coming on this tour. I never cease to be amazed by the generosity of people who donate their valuable free time to charitable activities such as this. Julie is one of two non-British members of the group and hails from Halifax, Nova Scotia.
The rest of the group comprises a mix of Brits, and a Belgian called Barbara, who seems as English as most of us and is married to David.
So we are:
Phreerunner Martin and Sue the Dishy Pharmacist.
Accountant Phil and Sue who works for the YHA.
Building project manager Martin and planner Vicky (or Victoria, as the Explore rep calls her!)
Traveller Julia (the last of the 7 of us who knew each other were going – the 8th (‘Notchy’ Andrew) having had to drop out due to a family bereavement.
Lucinda, who works in the famous RHS Glasshouses at Wisley, and who just happens to know Julia from a previous trip.
Banking accountant David and Barbara from a language recruitment agency.
Terry – a retired nurse, Sally – another accountant, Katie – who renovates houses, and Sandra who is heavily into Law Enforcement but has aspirations to run a ‘beyond youth’ hostel.
And finally, Julie the Canadian doctor.
[If any of the above read this and wish me to edit it, just let me know.]
It’s a happy band of travellers that board our private bus for the 4 hour journey all the way down to Wadi Rum, the furthest south we venture on this trip. Our guide for the week, Mahmoud, has now joined us. He is from an indigenous Bedouin family from Petra, and was born in a cave there. With 9 brothers and 5 sisters, he has just ‘moved house’ and last night had a party in Petra for 150 people. So he’s pretty shattered. He has an archaeology degree and promises to be very informative. His commentary on Jordan, its life and times and towns, starts as we motor through Amman in heavy traffic, passing the Blue Mosque, Parliament Buildings, and the site of a huge new shopping complex. Many new buildings are going up or have been completed. The population of this safe haven in the Middle East is rapidly increasing due to huge numbers of incoming Palestinian and Iraqi refugees, and this brings obvious challenges that the government is keen to address effectively (says Mahmoud).
Amman has been called ‘Casa Blanca’ because of the white buildings of local limestone.
Once out of the city, the land either side of the road is desert. We are on the ‘Desert Highway’ that runs nearly 500 km down to Aqaba by the Red Sea. Alongside us is a section of the 1300 km narrow gauge Hejaz railway line from Damascus in Syria to Medina in Saudi Arabia. This was built between 1900 and 1908 and was intended to lead a further 400 km to Mecca. It was damaged by TE Lawrence’s guerrilla forces during WW1 (The Arab Revolt) and never re-opened beyond the Jordan-Saudi border after the subsequent break-up of the Ottoman Empire. Attempts to re-open the line in the 1960s were foiled by the Six Day War in 1967. Today certain sections of the line are open, including the section beside us from phosphate mines near Ma'an to the Gulf of Aqaba, known now as the "Aqaba Railway."
A phosphate mine bellows white smoke into the blue sky.
After a while we stop for mint tea and try to learn more names of the rest of the group. Canaries squawk in cages.
Then we continue along the highway, which shimmers far into the distance. Trucks plough up and down between Amman and Aqaba. Numerous speed bumps keep our pace down through settlements. We enjoy ice creams at another 10 minute break, then head off on the last leg, descending from around 1700 metres back down to around 1000 metres, with fine views of the mountains of Wadi Rum ahead.
Now the desert areas are sand, not scrub. Entrance tickets for Wadi Rum, a carefully controlled area, are collected from the Visitor Centre, but we don’t leave the bus.
There are two languages in use here – it’s a bit like being in Wales! – Arabic and English. Many, if not most, signs are in both scripts, and virtually all the Jordanians we met (albeit not a very representative cross section) could communicate in English, and seemed happy to do so – they were friendly and welcoming.
10 minutes later we left the bus, transferred our bags to a 4WD and changed into boots for a stroll to nearby rocks in the desert, for lunch. On the way we crossed this branch line, built in the 1980s to serve local mining requirements. 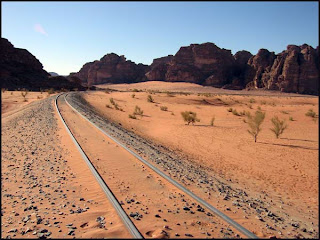 We enjoyed pitta bread with tuna, tomatos, veg, cheese, etc in the shade before heading on to camp, which was an hour’s walk away.
After all the travelling it was great to stretch out, though at a gentle pace due to the heat (32C in the sun, 23C in the shade). The camp is a Bedouin tent, set up exclusively for Explore trips, in which the whole group is to sleep. Meals will be taken on these mattresses under an overhanging rock. 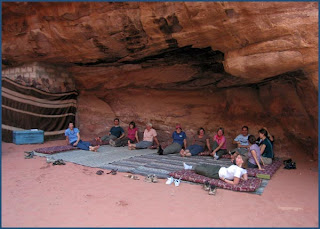 There’s far more space than in an Alpine hut.
A somewhat incongruous brick built toilet with a sink lingers nearby.
After a serving of tea (sugared during production, so we’ll have to get used to that and the lack of milk) some of us climb a huge sand dune next to the camp, then clamber onto abutting rocks for magnificent views over the desert and the rest of the group below. 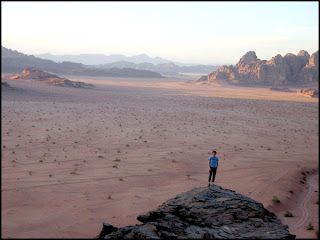 Sunset at 4.40 was followed by a lovely red sky, by when we had run gleefully down the dune – like scree running but softer and safer and sandier. Then it was back to camp for welcome beers and a relaxing evening eating (meats and rice cooked in an oven dug into the sand, with various salads), chatting and playing daft games around a roaring fire. 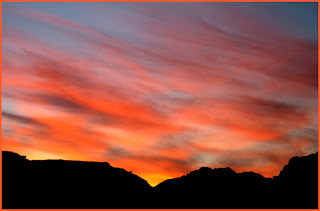