Wednesday 5 December 2007 - The Ship Inn and The Hanging Stone

A break in the weather gave me the chance to nip out to The Ship Inn at Danebridge for a little circuit to clarify this coming Sunday’s route. There was one short impassable section encountered on our 10 October recce, and I just needed to check the way around this.
So I parked outside The Ship and strolled across the bridge over the River Dane and on up to The Hanging Stone, a prominent landmark in these parts, and a splendid viewpoint to boot.
A crossing of the River Dane at Danebridge was first recorded in 1190, where it was known as Scliderford, meaning a slippery ford. In 1357, Sliderford Bridge was constructed, but was rebuilt in the seventeenth century, using stone. Unfortunately, this was washed away by floods in 1631 and replaced a year later by another, more sturdy, bridge. The present bridge dates from around 1869, and was funded by the two Counties of Cheshire and Staffordshire, with each paying £1,000 for its upkeep; materials being supplied by the Brocklehurst family, of Swythamley Hall, who were major landowners during the eighteenth century.
The Hanging Stone perches on the hillside like a giant fist, a sentinel overlooking Swythamley, on the Staffordshire side of the River Dane. Swythamley Hall stands in a fine park and was originally a mediaeval hunting lodge belonging to the Abbey of Dieulacres near Leek. The hall was granted to the Traffords by Henry VIII in 1540 and became their home and that of their successors, the Brocklehursts. Unfortunately the original house burned down in 1813, so the modern building is a rebuild dating from then. The Brocklehursts had an adventurous history. One of them accompanied Shackleton to the Antarctic. The Hanging Stone bears a plaque to Colonel Brocklehurst, who was killed in Burma in 1942. A game warden in the Sudan, he started a private zoo at Swythamley when he returned to Britain, and during the Second World War the animals were released into the countryside because there was no food for them. The wallabies from the zoo survived and bred around the Roaches until the late 1990s. Sightings of them have surprised many walkers and climbers over the years. The plaque reads:
“Lt. Col. Henry Courtney Brocklehurst. 10th Royal Hussars and Pilot in the Royal Flying Corps, 1916 - 1918. Game Warden of the Sudan. Born at Swythamley, May 27th, 1888. Killed Whilst On Active Service, in Burma, on Commando. June 1942.
Horses he loved and laughter, the sun. Wide spaces and the open air.
The trust of all dumb living things he won, and never knew the luck too good to share.
His were the simple heart and open hand, and honest faults he never strove to hide.
Problems of life he could not understand, but as a man would wish to die he died.
Now, though he will not ride with us again, his merry spirit seems our comrade yet.
Freed from the power of loneliness and pain, forbidding us to mourn or to forget.
Erected by his devoted brother – 1949”

There’s a second, earlier stone plaque at the foot of the stone:
“Beneath This Rock
August 1, 1874 was buried
BURKE
A Noble Mastiff
Black and Tan
Faithful as Woman
Braver than Man
A Gun and a Ramble
His Heart’s Desire
With the Friend of his Life
The Swythamley Squire”

Swythamley has been convincingly identified as the castle of the Green Knight of the classic mediaeval poem "Sir Gawain and the Green Knight" and nearby Lud's Church as the knight's 'Green Chapel'. This probably means that the unknown author was connected with Dieulacres in some way.

I continued on past Back Forest to Roach End, then through modern day ‘access land’ to gain the Roaches ridge. Dropping past the rocks I stopped by the BMC’s Don Whillans Memorial Hut for a flask of tea. There were numerous parties of schoolkids, climbing or lunching in a brisk shower of rain; there were no less than 7 school minibuses in the lay-by.
My route then took me easily past Pheasant’s Clough to Green Lane to complete my recce by finding an easy way around the impassable path.
Continuing by a boggy route past Turner’s Pool, I watched a fisherman land a 9 pounder and then return it to the pond. A short stretch of tarmac past a converted chapel brought me back to The Ship Inn, which is believed to date from the sixteenth century. 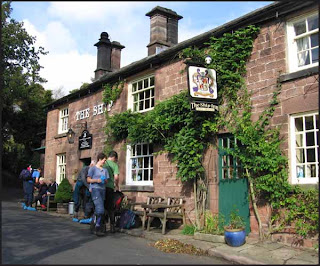 There are numerous stories associated with the pub, mainly concerning the name. It is presumed that a relative of Sir John Brocklehurst, who owned nearby Swythamley Hall, Sir Philip Brocklehurst, sailed with the explorer Shackleton on one of his many expeditions to the Antarctic, as an Assistant Geologist, although history states that he may well have been a paying guest.

It was often thought that the sign on the Ship Inn related to the famous Endeavour, a 1914 expedition, but it depicts the Nimrod in Antarctic Ice. Others say that the Ship is named after another vessel, known as the Swythamley, which was owned by a close friend of the Squire, and that the pub was named in his honour. These days it is renowned for the fine real ales on sale, and a popular restaurant. I enjoyed a glass of Golden Jackal to conclude this pleasant stroll.
Posted by Phreerunner at 17:55

Hi,
Thanks for your comment (answer really)to my first message. Yesterday, we did the Roaches walk. See photos on my blog at http://frenchinuk.blogspot.com/
We did exactly the same as yours, the stop at the pub was really welcome. Weather was good, even fantastic for February.
Cheers
JM

Very good, French, glad you enjoyed it. We will be doing a mini version of this walk, from The Ship, up the Dane valley towards Gradbach, returning over the top past Hanging Stone, in the evening on 4th March. It's a lovely spot, even in the dark.
For anyone else reading this, there are more route details/links at: http://phreerunner.blogspot.com/2007/12/sunday-9-december-2007-sunday-stroll-in.html