Our evening at Kinloch Lodge was spent relaxing over a very nice meal - thanks Dot!

Tuesday was mostly spent in the car on the extremely scenic drive between Kinloch, an hour north of Queenstown, and Milford Sound, via Te Anau, which proved to be a nice lunchspot for a sandwich overlooking Lake Te Anau. As we arrived at Milford in the late afternoon, so the crowds were leaving. We boarded the Milford Wanderer (along with a Kontiki coachload of young people!) and headed out on the Sound under skies that were blue with a layer of high cloud, gazing at Mitre Peak at 1600m that rises straight out of the blue water. 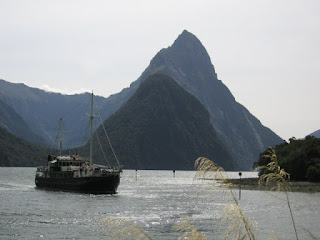 Unfortunately for us, the waterfalls weren't at their best, since, instead of having the usual 2 out of every 3 days with rain, they had experienced only one day's rain in the last 14! At Anita Bay, on the edge of the Tasman sea, the yacht anchored and some of us went sea kayaking whilst others went out on a launch (this included Martin who saw a rare fiordland crested penguin). Dinner was served on board before we motored back to Harrison Cove, seeing bottle-nosed dolphins on the way who were playing with a large eel, to spend a very comfortable night. The crowd were not party animals after all!

Only a few of us were up for sunrise about 6.30 this morning and were treated to red clouds for a couple of minutes over the glacier towering above us. Worth getting up for! After motoring out to the Tasman sea again, it was back to harbour, via a couple of New Zealand fur seals and the tall Sterling falls. 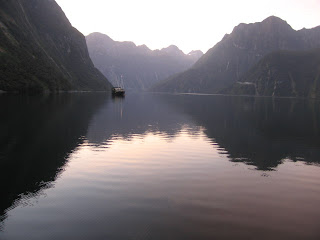 Now, we're in Te Anau, enjoying a super-warm evening, but feeling a little disappointed - our 2-day sea-kayaking trip is now only a day. The reason? There are 45 knot winds due on friday, our second day, which means that if we kayak in, we may not be able to get out! So, its only a day out tomorrow with five others and a guide. At least we have another 3-day trip planned later on!!
Posted by Nallo Lady at 07:01

Good to see you're enjoying yourselves (as we knew you would)Very envious that you got to see Milford Sound..we didn't see much of Doubtful Sound.. apart that is from an awful lot of water!! Enjoying your blog, keep it up it helps us re-live our trip. When/where are you going to do your Bungy Sue??(have you managed to pursuade Martin to have a go yet?)

Good to hear from you.
It's not a bungy, but a sky dive, and I have not been persuaded! Hoping to do it here in Wanaka, but weather is slowly turning, so it may be delayed...watch this space...