Tuesday
Organisation was the key this morning, so that, by 1.30pm, we were setting off for another walk in the mountains - but this time, it was in volcanoes! After storing bags and restocking in Turangi, we drove to Whakapapa (pronounced Fokker-papa) for a quick lunch before setting out.
The footpath was like a dried-out, Peak District bog path, which undulated and dipped occasionally into beech stands. Purple heather grew to either side with plenty of Eyebright flowers too.
It was a surprise to arrive at Mangatepopo hut at 4pm to find noone else there and 22 beds available! Not for long though. Whilst drinking tea on the veranda, enjoying the sunshine, a group of Navy personnel arrived, who proceded to inspect their bandaged feet and their voluminous provisions ('Rat packs' - lots of goodies, all in brown packets). 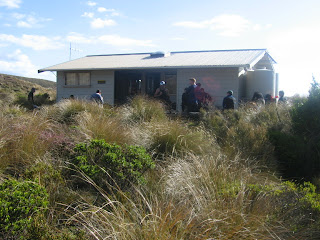 It was a convivial evening as the hut filled up to capacity and a good thing that the weather was fine and sunny, allowing everyone to use the benches outside as well as in. The hut faces west and sunset was excellent - Mount Taranaki (Egmont) in sight. Soon after, most of us turned in (it's dark now by around 8.40pm), including a family from the US who were bushed after a very long day and shared our dorm. 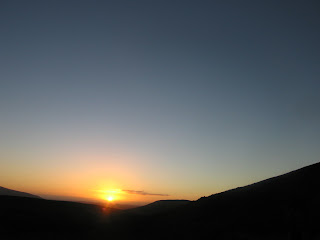 Wednesday
An early and cloudless start, soon after 7am. The path wove through several lava flows and there were easy sections on boards, before a steady climb up the Devil's Staircase, where we met the first of the enormous 'Tongariro Alpine Crossing' contingent. The Staircase had not been 'manicured' by the DOC (although they were just about to open a real staircase to replace the this nice path) and provided options for choosing your own gradient.
Topping out at the saddle brought us into the morning sunshine (so far, the mountain had shaded our ascent) and a view of our first summit, Mount Ngauruhoe, otherwise known as Mount Doom, a 2500 year old, near perfect cone. Stashing our rucsacs behind a chunk of lava, we started the 700m climb, before anyone else. An hour and 10 minutes later, we were on top, sharing the summit at 2287m with only our Swiss friend, who joined us on the ascent. We marvelled at the steam emitting from the rocks, and the superb panoramic views. The rocks were a deep red colour around the crater and we looked across to Mount Ruapehu, also cloud-free. We spent an hour strolling around the crater before a superb scree run (hooray for poles and gaiters) took us back to the hordes doing the crossing.
After a flat section across the South Crater, not a true crater but a drainage basin, and another short climb, we again deviated from the 'Crossing' to reach the summit of Tongariro (1967m), from which there were more fine views of both volcanoes and of Lake Taupo. 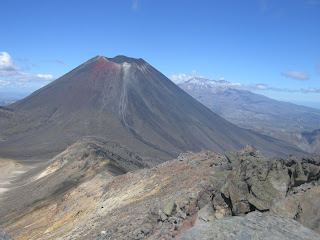 Back on the main drag, the Red Crater was also steaming nicely and the scree was making life difficult for those obviously not used to it! It ran nicely down to Emerald Lakes, three bright green, clear lakes, nestled on the slopes. 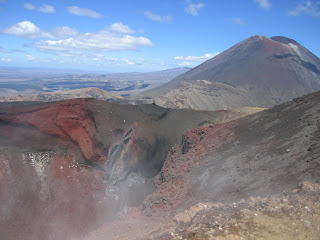 Here, our route left the Crossing, enabling lunch to be eaten entirely alone by the lower of the lakes. A fine spot to finish the previous night's leftovers - chilli mussels! 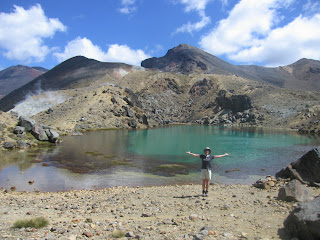 Then, it was a steep descent down a lava ridge and a weaving path through jagged lava forms created by early eruptions from the Red Crater. In contrast to the morning, we saw only one person on the path all afternoon. We reached our intended destination for the day, Oturere Hut, at 3.30pm, still such a beautiful day that we decided to continue a further 8km to the next hut.

It was a lovely walk, including a beautiful beech forest on the slopes of the mountain, to Waihohonu Hut, also nestled in beech trees. The nearby river, although not deep, provided a cooling and refreshing dip (for me). It had been a very satisfying day (27km with 1750m ascent - or 2+ COMs).
The hut's residents (an Australian hiking club) were not so chuffed to hear that there were 12 Navy personnel some way behind us, but with some organisation, beds were found for all those that required them. Another convivial evening and bed when it got dark!
Thursday
It dawned cloudy, so our decision to continue yesterday proved a good one. Leaving at 7.45am, we just remained ahead of the cloud to enjoy open scenery. A diversion to the Lower Tama Lake proved worthwhile and it nestled about 100m lower than us in a crater. 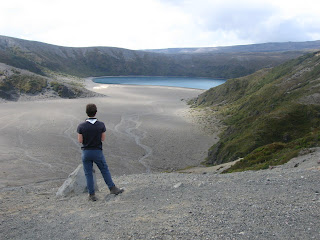 The high point was reached by a gradual climb to Tama Saddle. The other highlight was Taranaki Falls, which we passed towards the end of the morning, now meeting folk out for the day, as well as the Navy group again!
It was a pleasure to bump into Florian, who we had met at Waitomo, and had made the crossing yesterday.
Now, we are clean and relaxing at Riverstone hostel in Turangi. A Thai chicken curry is on the menu for tonight with a nicely chilled bottle of Chardonnay.
Posted by Nallo Lady at 03:06