As I write, gravity has finally got the better of our faltering TV aerial. Switching to the alternative ‘gravitas’ of Radio 4’s Today programme, we are just in time to hear the first known recording of a human voice – allegedly a recording of a woman singing Clair de Lune in 1860. It’s a hilariously bad recording and the usually formal voice of Sarah Montague falters as she tries in vain to continue with a serious item of news. It brings back vivid memories of one of Brian Johnston’s legendary cricket commentaries. Jim Naughtie’s faltering voice slowly brings things back to normal…
Perhaps we shouldn't replace the TV aerial – the VHF one is solid as a rock and a conduit for great entertainment!

Last night we enjoyed the last of this winter’s ‘Pitch Black’ walks, as Sheila calls them. Due to certain folk being afraid of the dark it was the select trio of Notchy, Nallo Lady and I that set off at 7.30 from Dane Road Metro Station. The last rays of the spring sunshine had been displaced by chilly evening air, but the route was virtually flat and the ambient light in the Mersey Valley near the centre of Manchester meant that torches weren’t needed.
We followed the route shown on this ‘flier’, soon leaving the canal towpath by an old sign which rigorously regulates tonnages allowed on the ‘weak’ bridge. 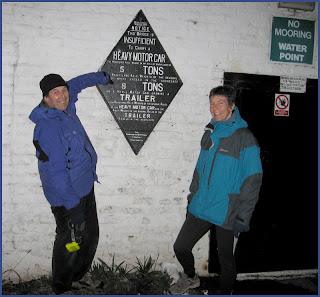 A puddle strewn track took us past a cemetery and over Chorlton Brook to join the high embankment of the River Mersey.
At Jackson’s Boat we eschewed the short cut to the pub, continuing on around Chorlton Water Park, opened in September 1978 after gravel extraction during the construction of the M63 motorway had left a large pit.
It’s a wildlife sanctuary, with many ducks and geese, but we actually saw more birds tonight settling down at the edge of the river on the stretch back to Jackson’s Boat. Kingfishers can be seen around here, but not tonight. No one else was about, and we were accompanied only by the quack of the ducks, the rumble of the motorway and the drone of descending aircraft.
Nallo Lady yearned to be back in the tranquillity of New Zealand.
The footbridge across the River Mersey at Jackson’s Boat was originally erected in 1816 and at that time there was a halfpenny toll to cross it. The bridge was built to replace a local farmer Jackson and his boat, who had provided a ferry service across the river. The boat was hauled from bank to bank by a chain fastened to posts on either side, much like the chain operated ferries which still provide a similar service on the Bridgewater Canal.
Jackson’s Boat pub has undergone many changes during my time in Manchester. It now sells Timothy Taylor’s ‘Landlords’ bitter, which set us up well for our stroll back to the start.
A pleasant path led towards Sale Water Park, another converted gravel pit, past the Visitor Centre that in years past provided many happy hours for my children, then over stepping stones to reach a familiar giant pylon and the car park at Deckers Restaurant.
This was my first visit for several years, and it had changed. The motorway has been widened and is now spanned by a footbridge. Unsure as to whether the old underpass had survived, we headed over this well constructed, wheelchair accessible, bridge. It’s a long one, spanning 11 lanes of motorway! 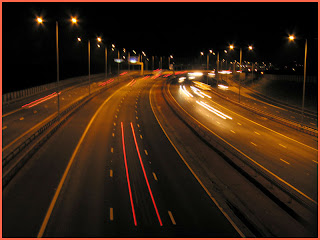 A right turn signed ‘Bridleway’ took us in the direction of the old underpass, but that had gone. After walking further than intended down this path, the railway and canal came into view, so we doubled back along a good track to complete our circuit. On reaching Dane Road, our objective, we found ourselves on the wrong side of a huge pair of locked steel gates. So we turned around, in search of an alternative.
To our surprise, two figures emerged from a nearby tent…these two scallies seemed most relieved to discover that we were not the local constabulary, just 3 idiots trapped within the confines of the Mersey Valley. Whilst guiding us back to the steel gate and trying to conceal the fumes on their breath, they chatted about this being their practice for a Duke of Edinburgh silver award expedition next week around Keswick. [Tall story of the week?]
The lads helpfully directed us to a weakness in the walled ramparts beside the steel gate that allowed us to clamber out and make our escape, though Notchy made a fine impression of a bluebottle in a jam jar before easing his aching body over the wall to freedom.
Posted by Phreerunner at 18:26