Tuesday 4th March 2008 - On holiday on the Coromandel Peninsula

So, the snorkelling gear I have carried with me from England is still in my bag, and lots of postcards are now on their way to England.

It wouldn't be the same without a walk, so out we went, when it looked brighter but was still raining, around 1ish. The destination was Cathedral Cove, just around the headland from Hahei beach where we are staying. 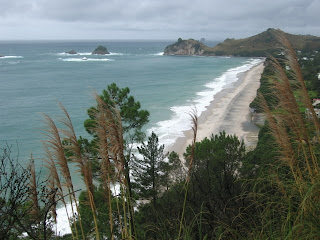 The seascape is lovely - many islands dotted around and some good waves in the strong wind.
Cathedral Cove followed Gemstone Cove (with its marked snorkelling circuit) and Stingray Cove (with honeycomb rock). Its gem is a huge, long archway, which today had water starting to enter as the tide came in. 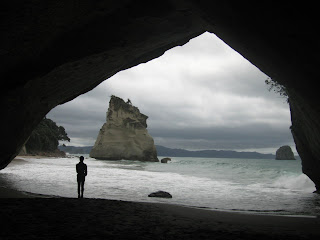 We lingered to watch the big waves, which had undercut some of the rocks. In the Puriri Grove on the return, we saw Tui, a blackbird-sized bird that has a lovely song - the first we've seen, although we've heard a few.
As we're 'on holiday', the Luna Cafe provided our dinner with excellent lemon and raspberry cake for dessert.
Posted by Nallo Lady at 07:26

Hello! We have all enjoyed "escaping" into your blog-life. The photos are amazing esp the sky-dive! I'm a big fan of the beach ones, Al loves the mountains, Kate thinks the sue-swimsuit ones are "nice" and of course Andrew goes for the train tunnel one! Life here great - our new floor should be ready for its grand opening by the time you get back. Hx

Well done with the sky-dive Sue..it looked and sounded as though you enjoyed it every bit as much as we did..look forward to swapping videos when you return!!

The Coromandel looks great. I remember the first Tui I saw (like you, having heard many beforehand -- incredible song -- sounded a bit like R2D2 to me!). Did you see that strange white feather they have on their throat? I believe that's why they're also known as the "Parson Bird".

Is it Nikau Lodge tonight?