An Arctic wind from Ben Alder greeted us as we emerged from the tent to dump our bags onto the snow-laden heather on the third morning of our walk. As I went back to supervise the striking of the tent, I caught sight of Alastair chasing a blue blob across the hillside. The blue blob was my fully laden rucksack. It was duly rescued and re-attached to terra firma with a piece of ironmongery.

It was indeed windy!

This was Alastair’s second attempt to climb Ben Alder and its neighbouring Munro (Scottish peaks over 3000 feet) summits.
Last year we had abandoned the attempt in advance, in favour of day walks, due to a poor weather forecast. [Our report on that trip is here.]

This year we set off from Pitlochry Backpackers Hotel on Friday morning in good spirits despite the light rain. An hour’s drive took us to the head of Loch Rannoch and a good parking spot by a deer fence that marked the start of our route.
By now we had seen red deer and red squirrels and assorted birds of prey…and the rain had stopped. As we strolled along a good track towards Benalder Cottage it was briefly t-shirt weather, but the forecast colder air soon arrived, with a change of the wind direction to north. 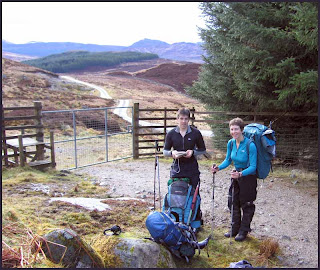 Fine views of the Glencoe summits opened out to the west, whilst our path headed unerringly towards Ben Alder, with its summit cloaked in cloud. 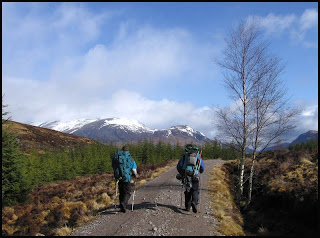 Laden with supplies for three days, the 13 km to Benalder Cottage took us 3½ hours, the last 5 km being over increasingly boggy ground beside Loch Ericht.

We lunched in the small bothy. It was cold and uninviting inside, but out of the wind. I tried to sit on a broken plastic chair, hence looking like a midget beside Alastair's ample frame. 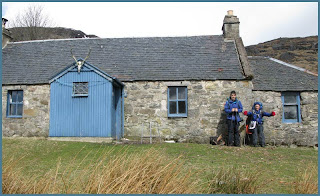 From the bothy we ascended steeply up to Bealach Breabag, reached way ahead of schedule at soon after 2 pm. Our plan had been to find a camping spot and bag Beinn Bheòil before supper, but the weather was fair, and we had loads of time...
"Ben Alder, then?"
"Yes" replied Sue and Alastair in unison.

So up we went, with excellent views across to Beinn Bheòil from the steep route up to the heavily corniced rim of Garbh Choire. 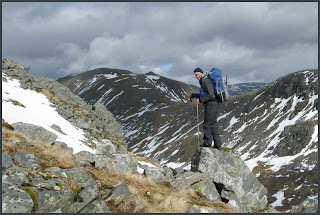 By now, Sue and Al were feeling the weight of their packs - I'd given Sue the food and the tent poles, and Al had the rest of the tent. We all had full winter gear including axes and crampons, and my pack contained The Kitchen. Loch Ericht seemed a long way down behind us. 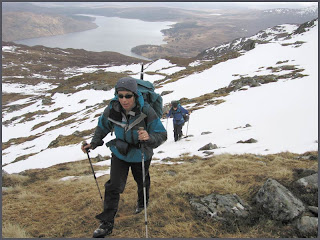 My Go-Lite Quest rucksack, weighing in at much less than the others' old Karrimor efforts, allowed me to zoom up the slope, but it was a cold wait at the top!

Eventually we regrouped for a walk above the huge cliffs of Garbh Choire, taking care to steer clear of the massive cornices. 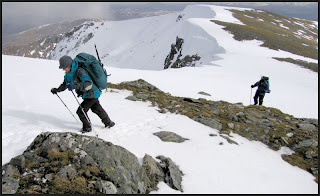 This was a big summit for Sue and Al. Ben Alder is not the simplest of places to reach, and they were very pleased to be able to tick off this hill. For me it brought good memories of a warm May weekend in 1990 when several of us walked in from Dalwhinnie. The trainers I used on that occasion would not have been appropriate today! 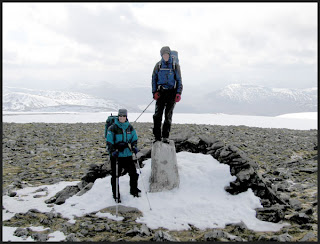 We decided not to attempt the direct descent via the Short Leachas to our planned campsite, as we didn't fancy an exposed scramble. So we headed north to the long pinnacled spur that is the Long Leachas - and that proved quite scrambly enough for us.
After descending with great care for a while we arrived at a minor col before another rocky section. Here the soft snow provided us with an enjoyable 200 metre bum slide into the depths of Coire na Lethchois. 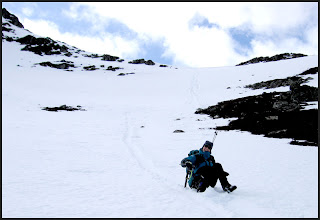 We strolled over the snowy wastes for about 1 km and found an excellent camping spot near the outflow from Loch a' Bhealaich Bheithe. Before setting up camp I thought it worthwhile to have a look at the outflow. I expected to find a small stream. With stepping stones...
No such luck! 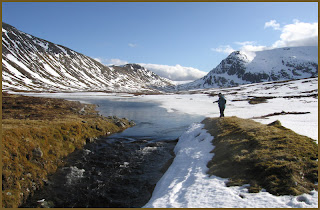 We decided to get wet now, rather than in the morning, and to cross here rather than try a long diversion around the head of the loch. So we marched across the fast flowing river, knee deep, in our socks. The rocks were actually very smooth, so bare feet would have worked. But the water was icy cold. [The socks soon froze and remained frozen until we got home on Sunday night!] 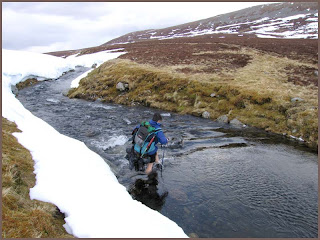 Camp was quickly established right next to the outflow, so fetching water was not an arduous task, though having both cold feet and cold hands was a little annoying. 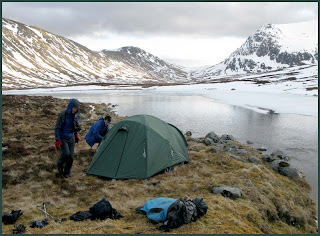 We enjoyed a sumptuous meal in the spacious tent (Terra Nova Hyperspace - being used in conditions for which it was designed), and in the time honoured manner of backpacking we drifted off to sleep shortly after 9 pm when darkness embraced our world.
After sleeping deeply up here at 720 metres in the pitch black tent we woke refreshed and eager to bag another Munro.

Beinn Bheòil succumbed without a fight, by 8.30 am. 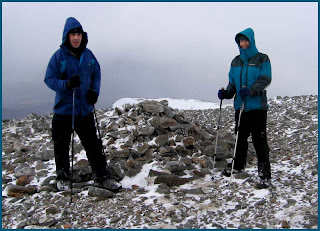 There had been a couple of inches of snow overnight, and the thick fabric of the flysheet was rigid with slabs of frozen snow. 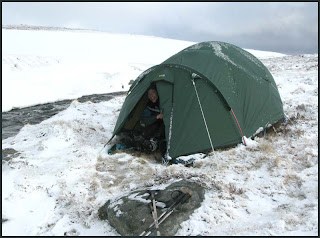 The path down to Culra bothy was delightful. By the time we reached this (most welcome) bridge over the Allt a' Chaoil-rèidhe it was 11 am. Having met just one person yesterday, we met 3 smartly attired hikers on the bridge. They had just left the bothy, in which they were staying, to climb Ben Alder. 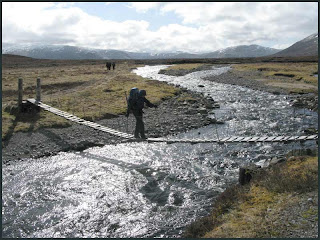 Here's the bothy, with Ben Alder and the Long Leachas ridge behind. If those 3 hikers' mountain skills are anything like their bothy skills...they never made it. 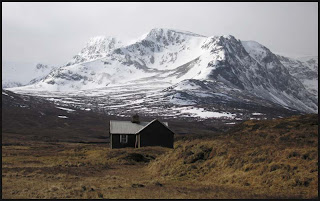 The bothy was a tip. Not from accumulated rubbish but from the current mess of its occupants.
A man in pink trousers was in residence, but he would soon be heading off towards Benalder Cottage.
We found a space to brew up and enjoy an early lunch, pleased that the bothy was there to provide shelter from the wind for a while, but also pleased that we had our own shelter and did not have to endure the messiness of others.
Our next objective was Carn Dearg - a 1034 metre peak, some 600 metres above us. At first, steep boggy heather, the most awkward sort of slope, and very slow. As we rose up the steep flank of the hill, the snowy squalls that had featured all day became more intense and more frequent. 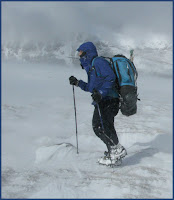 Alastair donned crampons, unnoticed by me as I looked back down the hill. I was cool with just 3 thin layers, and I stormed up the exposed slopes to reach the summit some time before the others. I found a good sheltered spot to add a thick fleece to my clothing, but the storm increased and visibility dropped to 5 metres. Sue and Al were understandably annoyed at my having left them, albeit the route seemed safe and straightforward.

As we navigated our way through stinging spindrift along the broad snowy ridge, the weather cleared briefly to show the way ahead (over Sue's right shoulder in this picture - steeper than it looks). 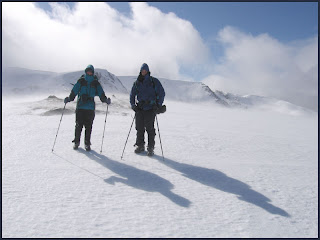 There was a steep snow slope in severe weather to be negotiated to reach the Geal-chàrn plateau. We were moving at differing speeds. Visibility was between poor and non-existent. It was blowing a gale. Blinding spindrift was a bit of a hazard...

We retreated towards Bealach Dubh down a gentle snow slope from Diollaid a' Chairn. 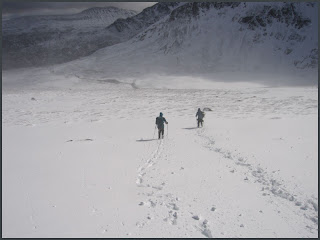 We had known our plan to bag three more Munros was an ambitious one requiring fortune with the weather, and we felt we had made the best of the day - after all, two remote Munros on one wintry day is not bad by our standards, and it was just so good to be out of the severe weather on the ridge.
It was an excellent, if snowy, path that led us over Bealach Dubh, then Bealach Cumhann, to the relative tranquility of the valley by the Alder Burn. 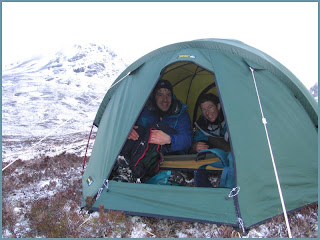 And here's the view from the tent, towards the Carn Mairg group in the distance across Alder Bay and Loch Ericht. 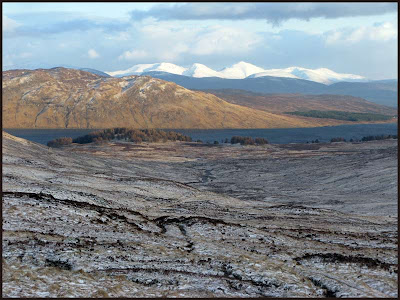 The weather worsened. Overnight we saw another two inches of snow fall. (Well, if we'd been awake - I think we all got about 10 hours sleep after another sumptuous meal.)
When we woke it was 0° C in the tent. 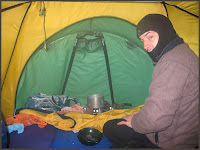 Alastair was on the leeward side so we made him cook breakfast.

I was on the windy side of the tent, the wind having shifted from north to east during the night. I could feel a tent pole as it flexed over my face as if nudging me..."wake-up, wake-up"...
The tent must have been flexing to a most peculiar shape, but it was well secured and we were cosy in our winter bags.
But eventually we had to pack up - done inside the tent - and strike camp. And that's when my fully laden rucksack blew away in the wind. Alright, it didn't go far, but...well, should a full pack just blow away? Perhaps Go-Lite need to install a restraining gadget? The ice axe kept it in place anyway, whilst we efficiently got the tent down:
1. Remove poles.
2. Drag out inner, folding as you go.
3. Fold flysheet as you unpeg it.
Easy really, then you shoulder your pack, if you can find it, and head down the hill. 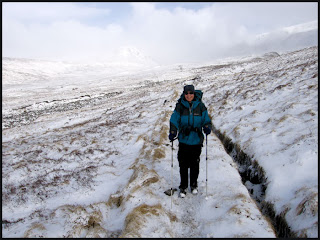 Soon Benalder Cottage, the hovel (sorry, bothy) in which we could have stayed, came into view by Loch Ericht, whose waves were splashing way above the shore line. 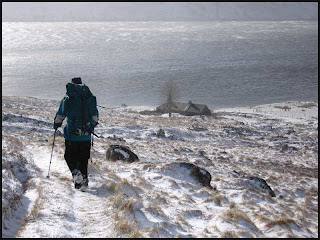 The path beside the loch was as boggy as ever, now with a thin crust of snow and ice that neatly concealed some of the wetter bits. But the wind was behind us and, looking back, the mountains were shining brightly above the white horses on the loch. 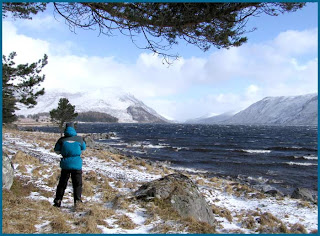 The walk out from Benalder Cottage took about 3½ hours, as had the walk in two days earlier.

Alastair's rucksack still sat at the jaunty angle that had become a distinctive feature of his rear profile - it was actually usually worse than illustrated here!
And as the weather became more benign, the track improved, skylarks sang above, birds of prey floated menacingly over the trees, and as we reached the car at about 1 pm we met a man walking a dog - only the sixth person we had seen in three days. 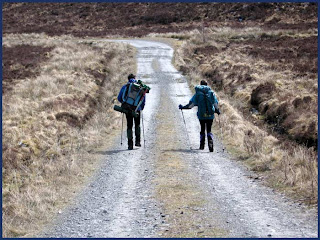 Here's an overview of our route, if you can make it out. In total we walked about 60 km and climbed about 2700 metres during this most excellent three day trip. 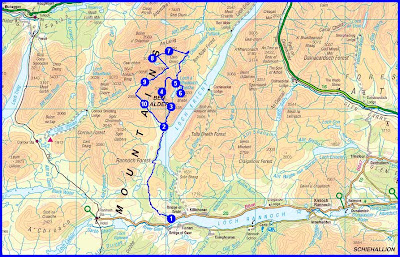 Sounds like it was a fantastic trip. Don't envy you the frozen footed stream crossing, mind!

Gayle, Mark, yes it was good to be out in proper winter conditions. You now know why I use tents not tarps! Incidentally, despite the severe weather, a max of 4 thin layers was needed, and one of these (vapour rise fleece) will be replaced by a thinner fleece for the TGOC, when I expect to need a max of 3 layers at any time. Sealskinz socks (the second pair) kept my feet warm despite leaky boots. The weather on the high bealachs was benign compared to the ridge - only 2-3 layers needed there.