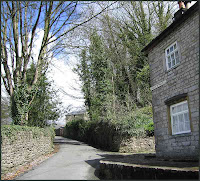 This afternoon I set off up Constitution Hill from the bustling market place of Settle, on a breezy, sunny day.
I lunched next to a family of weasels in a field beyond Banks Lane, overlooking the pretty village of Langcliffe. Ingleborough lurked in the background, the hat on its summit occasionally dipping below its brow. 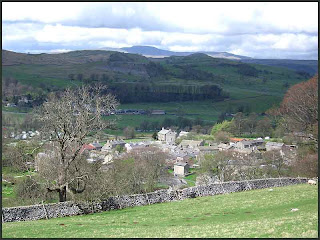 The brightly lit summit of Penyghent appeared through the bars of a gate.

A group of twenty elderly hikers in big boots and full waterproofs tramped towards me from the direction of this moss laden wood. But it didn't rain today, and my Roclites didn't ship any water, so the garb of these plodders remains a mystery. 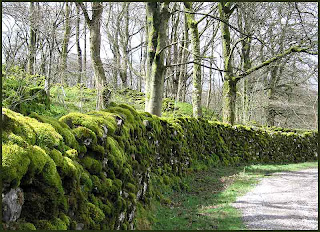 I headed up a cart track, past a barn, to a junction where a newly laid path led up to Jubilee Caves. I chose not to visit them, turning instead to the right towards Victoria Cave.
Information from 'Out of Oblivion' indicates that Victoria Cave was discovered by chance by a dog chasing a fox in 1837 and since then has been completely excavated.
Within the cave’s thick clay deposits, scientists found an amazing record of climate change in the Dales over thousands of years.
Victorian excavators were particularly fascinated by ‘bone caves’ where there might be a possibility of finding evidence for the earliest humans along with long extinct animals. Victoria Cave certainly had plenty of animal bones. The earliest, at 130,000 years old, included those of hippos, narrow-nosed rhino, elephants and spotted hyenas. They date to an Upper Pleistocene interglacial when the climate was much warmer than today.
It seems as if at that time, the hyenas were using the cave as a den and dragging scavenged bones back to it. No evidence was found for human activity during this period.
The glaciers then returned and from 120,000 to around 12,000 years ago the cave gradually filled with layer upon layer of clay deposited as the glaciers periodically melted.
After the last Ice Age the cave was used by hibernating brown bear. In amongst the animal bones of reindeer was an 11,000 year old antler harpoon point, the first evidence for people in the Yorkshire Dales.
For archaeologists, the Roman layers were even more interesting. Here a collection of unusual bronze and bone artefacts were found, including brooches and coins. The unusual nature of some of the finds has led archaeologists to believe that the cave was being used as more than just a storage place or shelter for craft workers. It may even have been some sort of shrine. 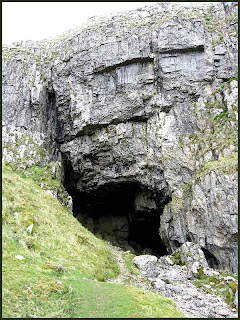 I hadn't brought a torch, and soon came to a dark dead end. I decided (for reasons of not having a torch) not to go up to nearby Attermire Cave, whose keyhole like door leads to a high winding passage, followed by a long crawl into a lofty chamber containing a pool.
Worth a visit sometime...
My route took me south, ignoring a prominent cairn at 440 metres and soon dropping to a path junction where tracks led determinedly east towards Malham, and west directly back to Settle.
The path rose gently to reveal a wonderful panoramic view behind me to the north.

I left the path to ascend Sugar Loaf Hill, pointed out to me earlier by Heather on our walk around Long Preston. Here's the view towards Pendle Hill from its 370 metre summit. 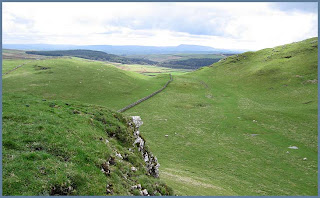 A sharp descent brought me quickly down to a tarmac road, High Hill Lane. Heading towards Settle, I quickly turned left down Lord Elphus Lane, past a wood, towards the pleasures of Cowpasture Plantation, from where this rural scene had replaced the views of rugged limestone outcrops. 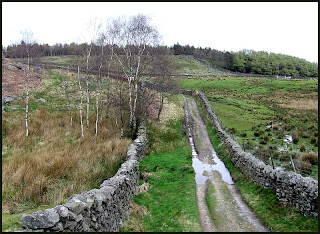 A right turn before reaching Lodge Farm took me along a good path towards Settle. 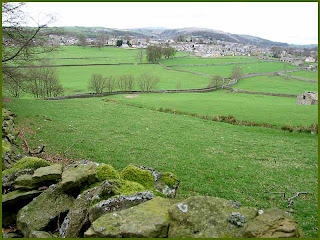 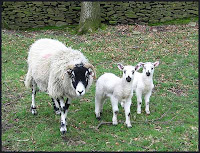 Mint sauce had been on my mind for the entire walk! 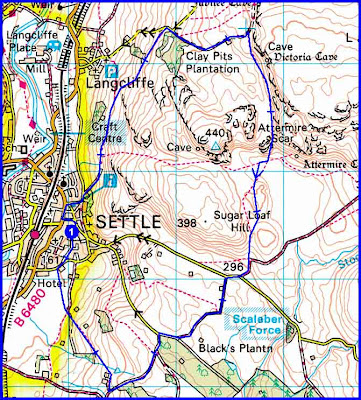