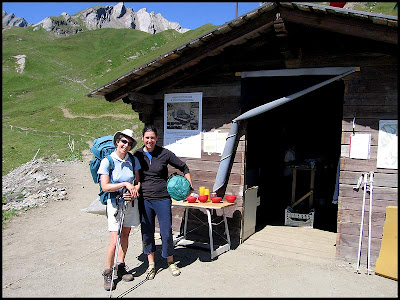 Chris, Beverley, Sean and Rebecca were doing the TMB clockwise - against the grain, so to speak. They hadn't met anyone on consecutive nights, and their paths hadn't been too crowded. Nor had the refuges - they were not booking ahead by more than a day, and they were also using camp sites. They had a few issues with Kev Reynolds' guide book, which has replaced the one we used in 2000. That surprised us.

They were having a good holiday, and we enjoyed their company last night. Hello folks! We have now encountered 12 English people on the entire trip.

The clear dawn brought fine views of Grandes Jorasses. The buffet style breakfast was the best we've had in a rifugio. Roman infers that anything to do with Walter Bonatti is bound to be top class. Perhaps so, but this is a smart purpose built private refuge with a good guardian. Its name is irrelevant. Here's the message I sent from the breakfast table.

We got away into the crisp (5C) mountain air by 8 am. There was a bit of ground frost, so walking conditions were excellent. This led to a quick 900 metre ascent past purple gentians and black vanilla orchids up to the distinct notch of Col Malatrà. Notchy would love this spot, so we sent him this message.

Two French athletes joined us for our last close view of Mont Blanc, gleaming white under the blue sky.

Then came our long descent to Etroubles, with more big mountains gleaming to the east, and with the Swiss border to the north, confirming that we had well and truly turned the corner and were heading away from France.

The narrow path down steep scree on the initial descent into Comba di Merdeux wasn't the best place to meet about 50 Italian children, some carting huge rucksacks, others nothing. We stepped aside to let the ascending horde pass, as did the friendly French athletes. We were glad to have left the col before they arrived - there was barely room for a handful of people up there.

Down we went, slowly, through yellow and blue meadows, Monte Rosa in the distance, a bit of high cloud melting away.

We continued down past swooping martins to reach a large barn at the head of a track at around 2300 metres. Cows milled around outside, but part of this barn was occupied by the OMG 'base camp and field kitchen'.

Guilia, one of the students at 'base camp', plied us with tea and explained the €1.6 million project. A 60 bed posto tappa style rifugio is being built up by a small lake higher up the valley. It's being funded by the local community and any profits from its operations will go to help deprived people in South America. Every day about 15 to 20 students are giving up their time to haul loads from the road head to the building site. This will save a fortune in helicopter charges. But won't it cost a fortune to feed everyone? We were offered lunch - a massive (metre long!) pan of frying pork chops and another one of sausages made that very tempting. However, we had our own pantry and didn't want to linger for too long, so reluctantly bade a fond farewell to the philanthropic students and moved on down the grassy AV2 path that has replaced the deep earthy groove of the TMB.

An idyllic spot for lunch was followed by a pleasant stroll through small villages decked with red geraniums. There is clearly a Swiss influence here. There are also signs of affluence beside the narrow cobbled streets.

Beech woodland with poppies and huge pale bellflowers led us on this hot afternoon (30+C) past two camp sites to the relative suburbia of Etroubles and 'Camping Tunnel', which is very close to town. That was our plan today, as we wanted to visit the traditional craft festival here.

I'll write about that tomorrow.