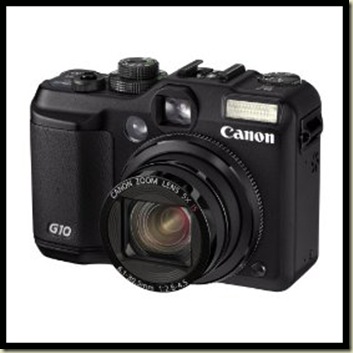 I've noticed that the G10 was announced yesterday. It should be available in the UK in November, though the staff in Wildings, Manchester, had not heard the news yesterday and told me that 'even if it is announced today' (it was) 'it will take until February or March to reach the UK'.

However, Park Cameras and Amazon both expect to have it, for £449, on 31 October, but note that the 'release date' is subject to change.

I would hope to get one from my local retailer, who is always on hand to provide help and advice, and offers prices that compete with the internet and include a 3 year guarantee.

I've been quoted nearly £90 for the repair to my old Powershot S70, so will probably soldier on with it in its broken condition (I have to hold the lens cover very firmly open to make the camera work, as the retaining spring has broken) unless I can get a cheap repair, until I can get my hands on a G10. I already have a brand new CCS protective case for it, thanks to Peewiglet's Plog, and RK Photographic.

I'm tempted to get a DSLR camera, but the bulk and weight - and the excellence of the Powershot range - leads me to favour the latter. The G10 will be more than adequate for my limited skills at taking snapshots. It's the journey I like; the photographic record is an incidental, albeit enjoyable, by-product - not an objective in its own right.

The cheapest I have found is £337 at Digitalrev (unknown provenance) - possibly around £400 when card and warranty, etc are added.

If your in the market for a new camera, be a good idea IYAM to have a looky at the new Panasonic DMC LX3 first.

It has a 24mm-60mm lens.
John Lewis in the Trafford centre has them in

Yes, to my amateur eye the LX3 looks an excellent camera, but for a similar price the G10 may have a higher spec and is 28-140 so has more flexibility, though I would imagine the Panasonic's Leica lens is superb.
Another consideration is that Sue has the G9 (she likes it a lot) so on our backpacking trips we will only need to take one battery charger, and we already have plenty of spare batteries for the G10 (assuming Canon are using the same battery as for the G9).

Good kit. I have a DSLR but am considering a compact and the G9 with RAW and the whole manual control appeals a lot. I will look up the G10.

We can recommend the G9, though we've not used the RAW for our snaps. Sue's had problems with the software for that, but I'm sure it could be easily sorted - RAW is just something we never seem to have needed. The G10 will have a wider angle and should be a worthy replacement for my failing S70. If you already have a DSLR and are looking for a good compact with a wide angle, the Ricoh range could be worth looking at, but (like the Panasonic mentioned above) they aren't very 'telephoto'. I think Chris Townsend gave the Ricoh a good review.

Note, now that I have the superb G10, that it uses a different battery than the G9, so for longer trips we will now have to take two chargers, but for up to two weeks (eg the TGO Challenge) a spare battery should be more than sufficient.