Sunday morning. Time for the walk that we postponed from Thursday evening due to John next door's birthday party.

The walk was along a route suggested by Tony Bowerman in his excellent book, 'Walks in Mysterious Cheshire and Wirral', and the historical information in this entry is taken from that book.

Sue and I set off with Night Bird and Birthday Boy (who for this morning came out of their retirement from walking) from Barnsbridge Gates car park, only slightly late after being held up by a slow load and a bicycle event. This is Sandstone Trail country. We joined the dog walkers and push chairs on the broad woodland path beneath tall oaks and sweet chestnuts. Soon after crossing the railway line we took a left turn and before long found ourselves at the Forest Enterprise Visitor Centre. I was looking for clear maps of mountain biking routes in the forest, but nobody has yet produced a guide of any interest - the trails simply follow the broad tracks, so if you want any excitement you have to devise your own route through the woods. I will return to do just that.

The guidebook was useful. Many of the paths are not marked on the OS 1:25000 map, probably because about 340 acres of farmland through which they pass (The Old Pale) were only purchased by the Forestry Commission in 2000. New paths led along the bottom of the hillside, with Eddisbury Hill and Pale Heights rising above us to the right as the drizzle started and waterproofs were donned.

As we passed below the ramparts of the ancient Eddisbury hillfort the view to our left encompassed the Cheshire Plain, with Joddrell Bank radio telescope's white dish in the middle distance and the western edge of the Peak District just visible through the murk. The hillfort is the largest Iron Age site in Cheshire, built to guard a trade route hundreds of years before the arrival of the Romans. The Romans overran it and levelled the rampart and ditch before perhaps using the hill as a signal station, after which it remained as a deserted ruin for some 800 years. Then in around AD915 the fort was rebuilt to help protect Cheshire against the Danes. Massive earthworks from that time still tower 6 metres above the silted up ditch.

Buzzards mewed above us, as herons flapped past, scouring the meres for food.

Beyond the hillfort the path emerges onto Eddisbury Hill Lane by a sandstone farmhouse. A right turn here led us over a small rise and past the 'Old Pale' cottages. Whilst the lane went left, we continued along a broad field path almost on the line of the old Roman road, the Watling Street, linking Mamucium (Manchester) with Deva (Chester).

Here we are on the path. 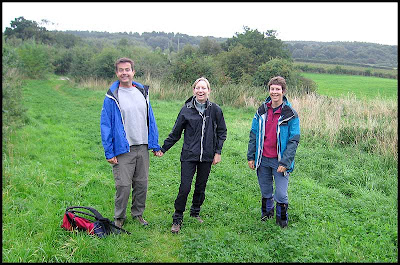 In 1885 one WT Watkin, the Victorian author of 'Roman Cheshire', made an exploratory excavation and found an 11 metre wide cutting near the path. He announced its discovery as 'the most remarkable section of a Roman road in Britain'. As you can see, it is now rather overgrown! 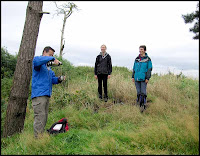 But we stopped for a spot of tea. Unlike Weird Darren, we do not have a Victorian cooking stove collection, so we made do with Richard's bottomless flask.

And there was chocolate caramel shortbread, of course. There always is.

A helicopter with a bright spotlight (sadly not reproduced very well) found us, then decided it was looking for someone else.
Never mind, we weren't lost, anyway.

My camera has become very difficult to use, so until the G10 arrives my snaps may be even worse than usual. The helicopter was difficult to capture. The lens cover of the Canon S70 refuses to stay open and has to be held firmly in the open position all the time, to prevent the lens from retracting, making image capture somewhat tricky.

Autumn is fast approaching. Even the willowherb is fading. But the yellow plumage of ragwort provided a little colour as we strolled along in the drizzle to rejoin the Sandstone Trail near King's Chair. 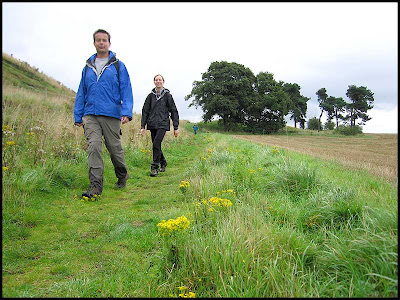 Then it was through mature woods, past shallow medieval quarries reputed to have been the source of the stone for Vale Royal Abbey, erected between 1277 and 1300. 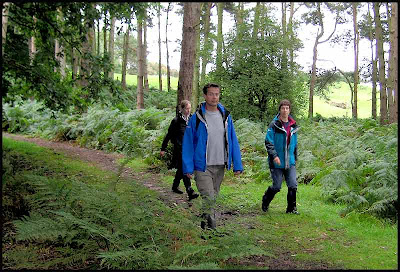 In Nettleford Wood this steel and terracotta Sandstone Trail waymarker in the shape of a wild boar confirmed that we were on track. 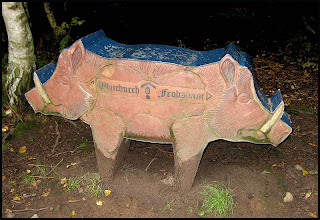 Now we turned off the main path, along an alternative route to a viewpoint. On the way we spotted a kestrel in a tree. The perch commanded a fine view over grassland, and despite our close (and noisy) proximity the bird was not inclined to fly, preferring to survey its territory from this fine perch.

Then it was up to 'Pale Heights', in fine weather again, for panoramic views in the company of a collection of masts. From here we could admire the Welsh hills, the Dee estuary, the Wirral peninsula, the Mersey estuary, Liverpool Anglican Cathedral, Stanlow oil refinery, the Pennines and the Peak District.
A path below the masts brought us back around to the Old Pale ridge, where some new earthworks evidence the construction of a swirly sculpture. It's currently work-in-progress, awaiting completion and perhaps an information board. 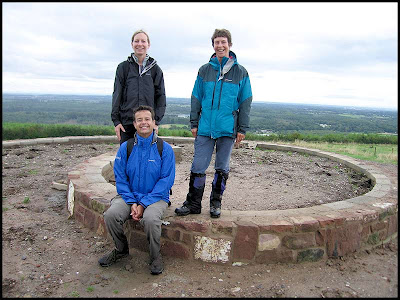 Beyond this it was an easy stroll back down towards the Visitor Centre, then left past Eddisbury Lodge and its horse borne inmates, to rejoin the Sandstone Trail and the 'pushchair' route back to the car. 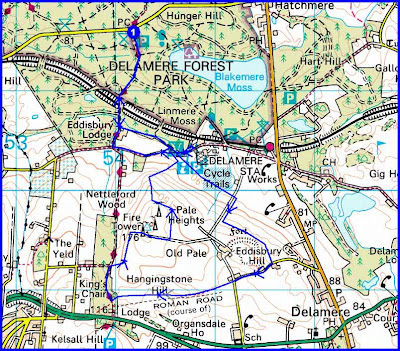 Ooh! You were on my 'LEJOG Line' there at the start of your walk. I thoroughly enjoyed the Delamere Forest; a little sandy wooded haven alive with bird-song.

You were not far at all from The Tigers Head Inn at Norley - an emporium that served excellent Burton and Brakespears with the smell of newly mown grass coming in through the doors and windows on a beautiful sunny day.

Strange - I never hear you make mention of the fine hostelries any more - a pity - you wrote them so beautifully on your Border Route!

Alan
We've enjoyed home cooking and our own wine lake since returning from the Border Route, but rest assured, there will be a fine hostelry to report on by this time tomorrow!