Thursday 25 September 2008 - The Romans in Manchester

I had occasion to pop in to town today.

Ellis Brigham's shop in Castlefield seemed to have loads of staff and no customers, so I swelled their coffers by £7 by purchasing new tips for my Leki walking poles.  The Makalu Classics - abused for over 12 years now - simply refuse to wear out.  These are their 4th set of tips.

Next to EB's emporium is this, The North Gate: 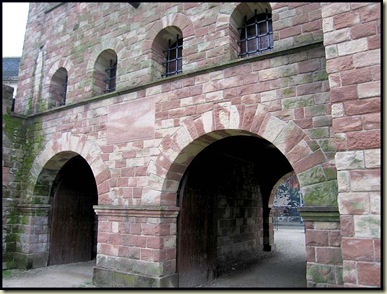 By the middle of the second century AD the Roman fort of Mamucium was rectangular, with a gateway on each side.  This north gate of the fort was on the Roman road that crossed the fort's outer defences and ran into the heart of the civilian settlement.

The reconstruction shows how the defences may have looked around AD200.  Whilst this site was excavated in the 1980's, the Roman inscription above the gate is based on fragments found in the 18th century.  It commemorates a detachment of Raetians and Noricans, known to have been stationed in Manchester.  It also commemorates the Roman Emperor Severus and his sons, who are thought to have commissioned the building of the stone defences.

Here's another view, showing the footprints of some buildings inside the fort. The sheep arrived in 1986, and seem to have worn quite well! 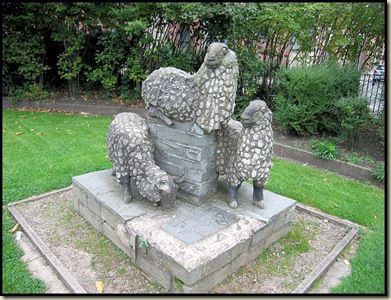 My textbook, 'Old England - A Pictorial Museum' (somewhat elderly itself) does not mention the Mamucium fort but it includes the following observation on Roman architecture:

'It is easy to understand how the Roman architecture of Britain should not have been in the best taste.  When the island was permanently settled under Roman dominion, the arts had greatly declined in Rome itself.  In architecture, especially, the introduction of incongruous members, in combination with the general forms derived from the Greeks, produced a corruption which was rapidly advancing in the third century, and which continued to spread till Roman architecture had lost nearly all its original distinctive characters.  The models which the Romans left in Britain, to a people harassed with continual invasion and internal dissension, were no doubt chiefly of this debased character.'

I wonder whether future generations may apply similar comments in relation to 'the west's' modern day constructions in certain far away places.

Just around the corner is this, the Beetham Tower, at 171 metres currently the tallest building outside London.

I have no desire to enter it, or really to do anything other than scurry quickly away.