We spent the weekend in Kendal, enjoying an assortment of lectures and films at Kendal Mountain Festival:


Colin Prior - was informative, but he lives for photography and has huge amounts of equipment, so we 'snapshotters' can hardly hope to emulate him. He also spent some time discussing his specialism - panoramic shots taken with a special camera. I doubt anyone in the audience had one of those cameras, we simply feasted our eyes on Colin's brilliant pictures. For an overnight shot, he carries 56 pounds of equipment!

Kenton Cool's audio visual presentation on his exploits on the north face of the Eiger (successful) and on Everest (unsuccessful) with the enigma that is Ran Fiennes was superb - hilarious at times. Here's his blog on his Kendal experience.

David Breashears introduced his new film 'Storm over Everest', an attempt to tell a fuller story of what happened in the fateful storm in 1996. It was made in the documentary style of 'Touching the Void', concentrating on interviews with just half a dozen or so of the survivors. There was no mention of any Brits or of the (controversial) South Africans on the mountain. So it didn't present the full picture, but we found it compulsive viewing.

Contrasting greatly with the mountaineering exploits of Cool, Fiennes and Breashears, was Cameron McNeish and Richard Else's excellent double act, describing a trip through Sutherland from Lochinver to Tongue. Here's Cameron's take on the experience.

There were many more lectures, mostly audio visual. It was a shame we couldn't see more. One that I am sorry to have missed is Andy Kirkpatrick's 'Brokeback Mountaineer' (the link is to his blog), in which he looks back at ten years' worth of climbing partners and wonders why no one will climb with him any more. We did get to see a film about him - 'Hard XS: Suffering Andy' which opens with the line 'Andy Kirkpatrick should be dead'. He is clearly one of the characters of British mountaineering - if he's speaking near you - go see him...

We also watched a small sample of the 80 or so films on view, being quite selective about what we saw. A highlight for us was a film made by an Indian motorcyclist, Gaurav Jani, 'Riding Solo To The Top Of The World'. This was some undertaking, and the lone filmmaker's friendliness and determination is repaid in kind by the indigenous people he meets and befriends en route. Brilliant.

The awards ceremony was, as usual, introduced by Sir Chris(Berghaus are the main sponsor - their 'Experience the Adventure' video was shown before each event at the Festival), who opened with a tribute to the former organisers of the Festival, John Porter and Brian Hall. They disappeared from the scene fairly recently under (to an observer) odd circumstances, and were not present this year. I'm sure it's all explained in a 'Forum' somewhere, but I'm not really a 'Forum' person, so my memories of John and Brian's efforts are of some superbly organised Film Festivals, and Chris Bonington's fitting tribute to them.

The Grand Prize was won by a climbing film 'On Sight' which we did not get to see, and the 'People's Choice' was a film called 'Beyond The Summits' featuring Catherine Destivelle, which we did see. The photography was admirable, but the film had serious defects (explained by one of the judges here). I can only surmise that it appealed to the climbers who predominantly attend the festival, and that Catherine, who was present, did some effective campaigning.

Our hosts for the weekend was the excellent Meadowcroft B&B in Ings, right next to the excellent Watermill Inn where on Friday we enjoyed their fine food and the Collie Wobbles Beer from their micro brewery. 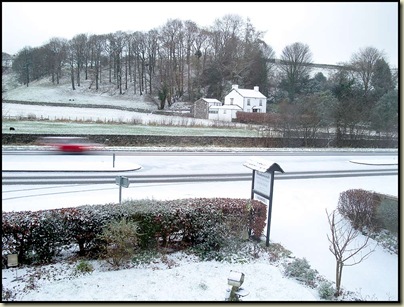 View from our bedroom window on Sunday morning 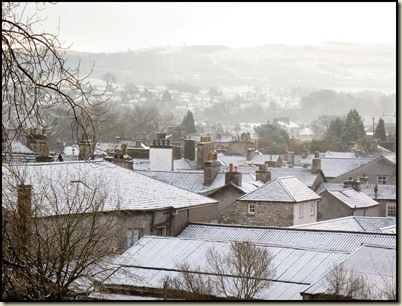 The roofs of Kendal 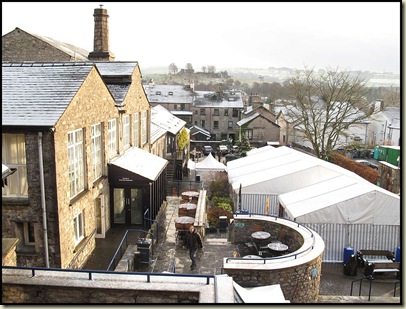 The Brewery Arts Centre, home of the Mountain Festival, and (below) from the same spot, Kendal YHA with the castle beyond 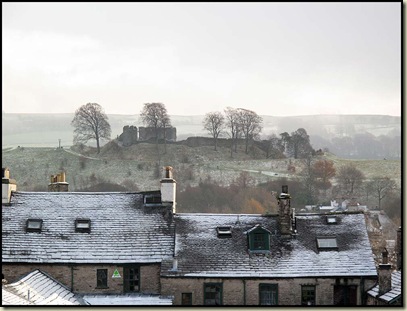 Martin, the Everest movie isn't that new. It has been shown on Sky Movies several times over the past few months. It's real name is Remnants of Everest, and came out sometime in 2007.
Sadly imdb does not even mention the movie!

Thanks for pointing this out, Darren. I was unaware of it, and the 'Storm over Everest' link in my posting doesn't reveal anything either. The question and answer session with David Breashears after the showing of the film was quite interesting:

Q: Why no mention of the other groups on the mountain?

A: There was no reason to. Beck Weathers alluded to them in his final comments in the film, but the other groups had themselves to look after in a bad storm, they were not interviewed, much has been written (by Krakauer and Boukreev in particular) and it would be unfair to pronounce any judgement in this film. People should form their own views based on the information available.

Incidentally, the Wikipedia entry provides lots of useful links for those interested in this piece of mountaineering history:
http://en.wikipedia.org/wiki/1996_Everest_Disaster

BTW 'imdb' is the acronym for 'Internet Movie Database'. New to me.

I forgot to mention in the posting, our little excursion into the land of stand-up comedy on Sunday afternoon whilst we took a breather from the films.
Mark Olver was the comedian - apparently he is the warm-up man for a programme called 'Deal or no Deal' of which I have to admit I have Zero knowledge.
Anyway, Mark claimed to have been sponsored by Berghaus to walk to the Edinburgh Festival, from Bristol, funding his trip from gigs en route, at which he would request free lodgings from his audiences. Part of the deal with Berghaus was a commitment to this performance. Sir Chris was not however amongst the 30 or so folk who crowded in to enjoy Mark's performance from the lounge chairs of the 'Warehouse' venue.
Mark's tales of his tramp were most entertaining, and his interaction with the audience was excellent, especially when some of them left, upset by his allusions to what some men get up to when they have nothing better to do. Any crudity was however very mild, and the description of his visit to the Barton Grange Garden Centre urinals, and the surprise entry of tourists with cameras, was hilarious, as were many of his other exploits. Well done, Mark. Come back next year.