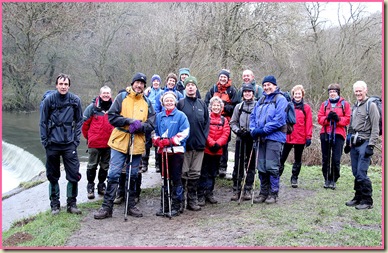 The Vanilla Kitchen Coffee Shop in Tideswell provided welcome refreshment for the crushed passengers of the small car after the winding roads from Manchester.  Gary and Sue were already installed, and we enjoyed a leisurely sojourn here before heading down to Tideswell Dale Picnic Site.

Here the occupants of a fleet of vehicles that had arrived from places as far flung as Louth and Crosby were milling around exchanging Christmas cards and noshing Nallo Lady's chocolate caramel shortbread.

Graham and Tove - who had just about the shortest journey - were inexplicably missing, so we paused briefly before setting off without them on a dull, overcast day.  Thankfully it was dry and calm, so not at all bad for this sociable outing.

Litton Mill has now been renovated and after years of looking derelict it now appears occupied and presentable, despite a large piece of plant still lingering outside.

Beyond here Andrew's gloomy prediction of a flooded path at Cressbrook seemed to come true when we met another group returning along the path, shaking their heads despondently.  So we decided not to join the ducks, and headed along the alternative higher path to Cressbrook, where another mill has been converted into apartments.  These have a much better outlook than those at Litton.  There's a café here, but today it looked shut for the winter.  The path was indeed a bit flooded, but it looked quite navigable for those with decent boots.

It's many years since I had seen so much water here, but I suppose it did rain yesterday.  Anyway, we were soon up on the old railway line that to Ruskin's dismay* provided a link between Buxton and Bakewell.  I recall the days before the tunnels hereabouts were blocked - they were fun to walk through, and perhaps that's why we didn't notice the flooded river in those days! 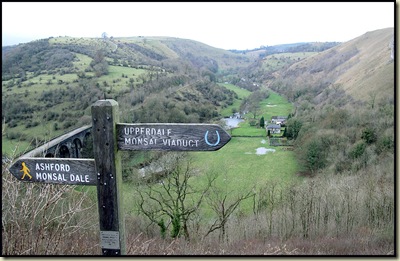 It took us less than an hour and a half to reach the sanctity of the Longstone Restaurant at Monsal Head Hotel by soon after noon.  Sue and Phil were waiting, shivering in the cold air, both suffering from ailments that had confined them to bed for the morning.  We installed ourselves at the two long tables prepared by the staff.  Three people were missing, but their food had been ordered and was being cooked, so Ken (who had turned up 'on spec') was faced with the decision as to which of the three meals he should eat, and the rest of us were anticipating a share of the other two.

Drinks were ordered and crackers were pulled as our leisurely lunch commenced.  The door burst open and a red-faced, puffed out, soggy duo entered the fray and claimed their places at the table.  Graham and Tove had got lost on their short journey to the departure point.  This used to happen a lot when Graham had affairs with a string of Marilyns, but after carousing with 1524 of these ladies to date, he seems to have run out of girls with that name in England and has moved on to bagging Norwegian Toves.  Fearful of missing their meals, the soggy pair had waded through the flooded river at Cressbrook, so as I thought - it wasn't really all that bad despite Andrew's woeful prediction.

[This won't stop Andrew, still grumpy from nearly witnessing recent horrific events at the City of Manchester Stadium, asserting that he was right and I was wrong!]

The food and service was excellent and we enjoyed the best part of 2½ hours in the warmth of the restaurant.  Some water pistols discovered in the crackers provided entertainment for the more intellectually challenged within this diverse group.  It had been a good turnout of 19 for the traditional Christmasy get together. 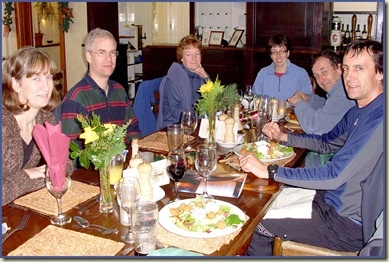 Historically a small group of friends would assemble on this day in the Stable Bar next door and plan the next year's activities so that they could be broadcast by way of Christmas card enclosures.  Remember those?  But times move on, and the internet can be deployed to aid with planning, so whilst plans for 2009 were discussed, the actual 'programme' doesn't need to go out with the cards and can be communicated by email and web page, and even here.  [This walk is the last on the current programme, so suggestions for 2009 will be gratefully received.]

Anyway, by the time we left at around 2.30, with Sue and Phil adjourning to their sick bed and Graham and Tove now in tow, the light was already beginning to fade.  But not enough to prevent a group photo by the weir in Monsal Dale (see above).

Ambling back to Tideswell via Brushfield was fairly intuitive, and the closest we got to viewing a map today was the minute screen on Paul's flashy GPS enabled mobile phone.  (I'm only jealous!)

Even that was not needed though, and despite a pause for tea, etc in High Dale, we managed to get back to the cars (except Graham and Tove - they are still looking for theirs as far as we know) before 5 pm, without the need for torches, which only a couple of us had with us anyway....

So ended an excellent and most sociable little excursion.  Thank you everyone for coming, thank you for paying for your food, etc so efficiently, apologies for any minor errors in the above account (feel free to comment), and we hope to see you all again soon, after all your various Christmas trips to Kilimanjaro, Ayres Rock, Liverpool Bay, Bonsall, and a few more mundane destinations....

Here's a short slideshow - just 15 images from this overcast day.  Thank you to Jenny for providing most of them.

Shown below is an overview of the route - about 14 km with 700 metres ascent, and strolled on this day in less than 4 hours at a very amiable pace. 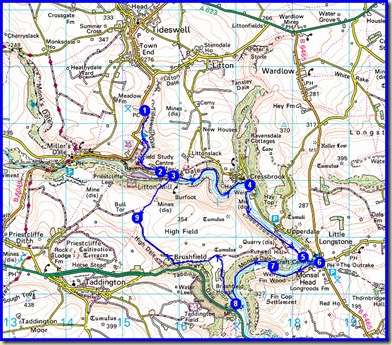 *"There was a rocky valley between Buxton and Bakewell, once upon a time as divine as the Vale of Tempe; you might have seen the Gods there morning and evening - Apollo and all the sweet muses of the light - walking in fair procession on the lawns of it, and to and fro among the pinnacles of its crags. You cared neither for Gods nor cash (which you did not know the way to get) you thought you could get it by what the Times calls 'Railway Enterprise'. You enterprised a railroad through the valley - you blasted its rocks away, heaped thousands of tons of shale into its lovely stream. The valley is gone and the Gods with it, and now every fool in Buxton can be at Bakewell in half an hour and every fool in Bakewell at Buxton; which you think a lucrative process of exchange - you fools everywhere."