Spring is coming on apace at home in Timperley, with a bit more colour every day, and trees and leaves gradually coming into bud.

Kettleshulme was shut.  The Bulls Head doesn't open on weekday lunchtimes, and we didn't get as far as the Swan Inn, which is just down the road. 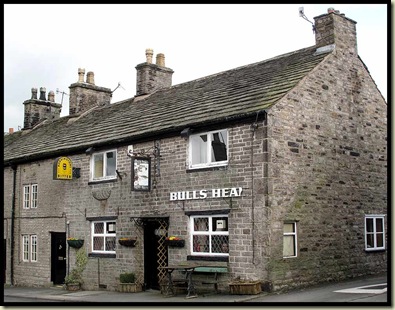 Starting after 2pm from outside the Bulls Head we followed a route described in detail here.

A cool breeze made for excellent walking weather as we headed quickly up to Taxal Edge... and wandered briefly off our route to gaze down to the Goyt valley and beyond. 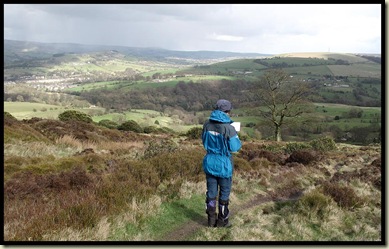 Our route then headed south along the border between Cheshire and Derbyshire, with Windgather Rocks lurking ahead of us under a big black cloud that spat stinging white pellets at us.

Tracks and a minor road took us on to Dunge Farm, whose gardens are heavily advertised hereabouts.  But today, though Spring is coming on apace in Timperley, these parts - only a few miles away - have a distinctly wintery look and feel.  Here's Dunge Farm and the view from the path - we'll try to visit again later in the year when there's a bit more colour on display and the tea room is open. 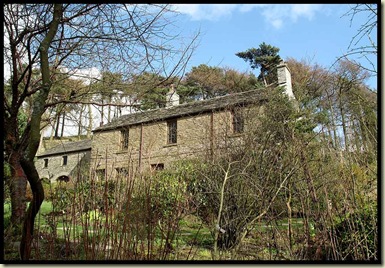 Beyond here, we ambled up a path past this tree... 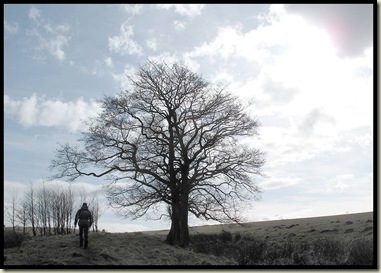 ...which looks rather different from the other direction, with Windgather Rocks and their ever present crown of black cloud behind the sunlit grass, which really is this brown at present. 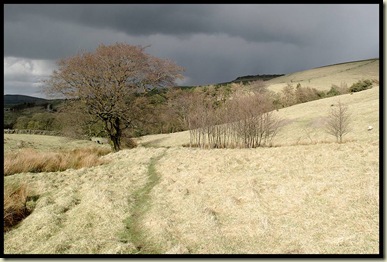 There was very little wildlife in evidence today.  The most obvious was the striking white faces of rooks wheeling above Kettleshulme, together with the ubiquitous carrion crows and the unmistakable flapping lapwings that seem to be a much commoner sight these days.

Some properties are messy and run down; others are immaculate.  This isolated house and its renovated barn beyond Green Stack tend towards the latter category, but you would need to enjoy a lonely windswept landscape to live here. 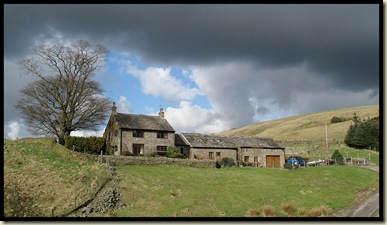 Continuing along the route, we paused shortly before Saltersford Hall in the shelter of a wall, to enjoy a welcome flask of tea and a respite from the cool breeze.  (Actually, Sue was seriously overdressed - she's obviously not been eating enough recently - a fleece was all that was necessary!  Or was it that she couldn't be bothered to carry a bag?)

Saltersford Hall, in the background, was built in 1595 by the Stopford family of Macclesfield.  It was occupied by the Turner family, whose Richard Turner, who died aged 60 in 1748, was the first person to be buried in nearby Jenkin's Chapel. 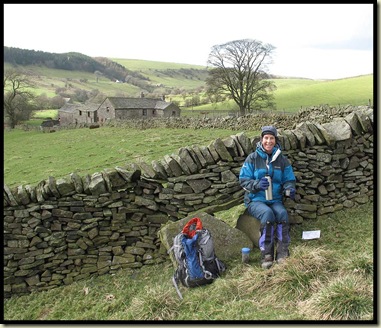 Soon she was off again, striding purposefully towards another immaculate house, this one - Burton Springs Farm - in a sheltered valley. 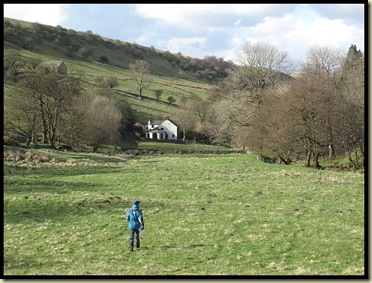 Beyond here the route continued up a steep bridleway to a high point with fine views towards Greater Manchester, beyond which on this clear day the tall masts on Winter Hill looked much closer than their 50 km distance from us.  Down to the south west, 80 km away, the Welsh mountains looked enticing.  We were envious of Alan, and Gayle and Mick, who despite the cool, blustery weather should be relishing clear views from the Carneddau hills this weekend.

Beyond the busy B5470 artery linking Macclesfield with Whaley Bridge, we found our way along an ancient green lane, now not even a bridleway - indeed, a rather poorly drained and ill-defined footpath - and gradually rose to re-cross the road at Charles Head.  What seemed to be the scent of a BBQ hung in the air.  We were puzzled, it wasn't BBQ weather!  Nearing the end of our stroll, we could see Kettleshulme in the valley below, with the hills of Kinder Scout clearly defined in the background. 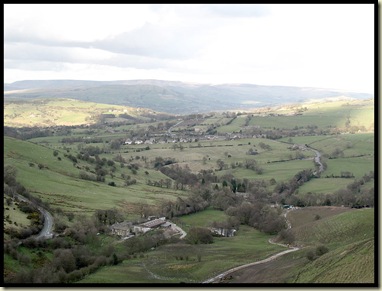 Charles Head Farm dates from 1764, when it was built by Robert Pott.  Apparently a leather-bound version of the Bible, known as the Charleshead Bible, is kept inside.  The farm now sports some attractive 'barn conversions' and a couple of interesting post boxes: 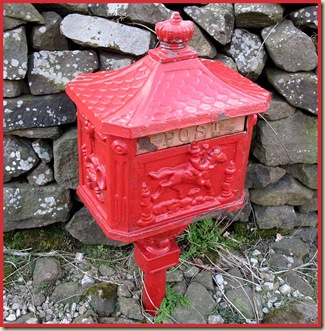 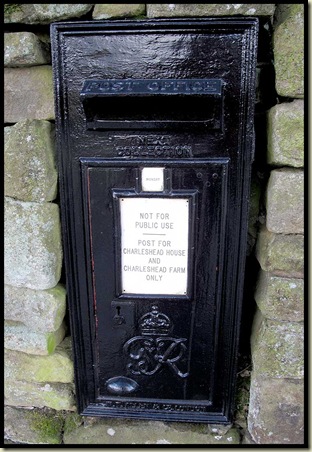 There's a great contrast between the new conversions and the old barns that serve as shelters for sheep or storage areas, etc.  This one, by the path leading to Todd Brook, is next to some impressive gate posts.  It must have been quite a different scene when it was first built. 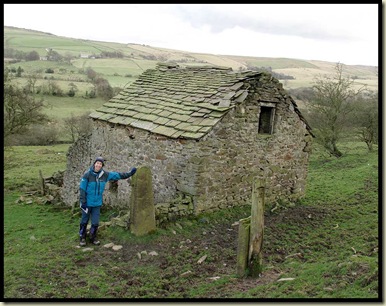 After crossing an extremely marshy field we reached the farm track that led all the way back to Kettleshulme.  A buzzard hovered overhead whilst two teenagers accosted us.

"Where have you been?" they interrogated.  We showed them the map, and explained that we had been able to see deep into Wales.  "I know" said one of them "I've been on that walk...and you can see nearly as far from the top of the tree we've just been in".  We chatted for a while - friendly country kids.

It had been a lovely walk, despite the paucity of spring colours.  In fact Spring seems further advanced in Torridon than it does here, several hundred miles to the south - perhaps due to the Gulf Stream.  Anyway, I did eventually find this rare example of a south facing gorse bush where the flowers are just about in bloom. 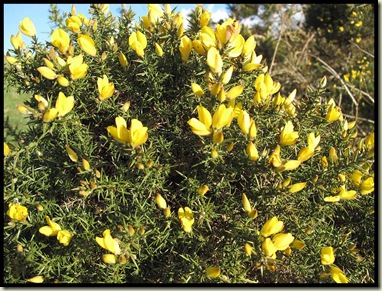 There was still a bit of tea in the flask, so we enjoyed it from the comfort of this bench before tootling off home. 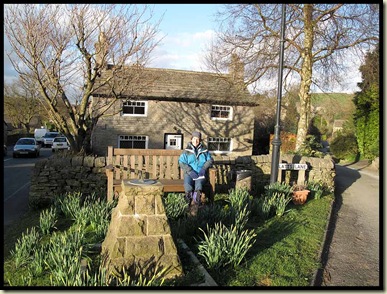 The route card is here, but as most readers won't be interested in that, here's our 13 km route.  It involved about 550 metres of ascent and took 3 hours, plus breaks totalling 10 minutes. 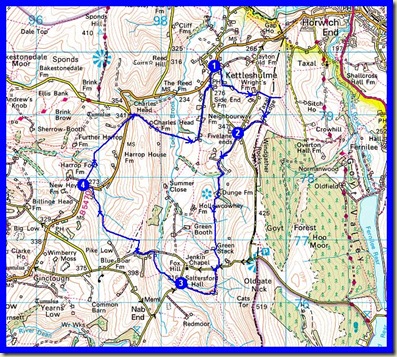 Nicely done. Thanks for the travelogue.

Yep. Spring is on the way, thank goodness. Looking forward to meeting the two of you in a month's time.