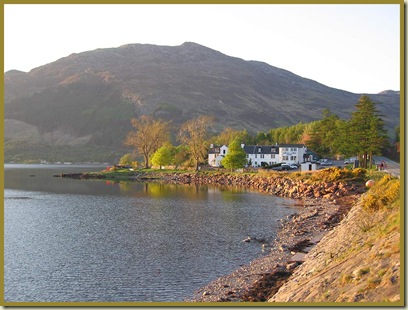 Many folk will be starting from the Kintail Lodge Hotel, pictured above before last year's Challenge. It's a brilliant place from which to start.

We head off to Montrose tomorrow to drop off the car and then spend Thursday travelling round to Mallaig to befriend a few strangers (I don't recognise any of the other names starting from there), en route saying hello to a few old friends who we hope to encounter in Glasgow and on the train.

This year's route doesn't cross either of my/our previous routes - we are steadily moving south, and this will be our first encounter with the hordes in Glasgow. Should be fun!

The route has now been penned, and is on view in some detail, together with a kit list, here.

We have no significant new kit this year - just a RAB Drillium jacket for Sue - largely due to having pulled out the gear during the last few hours, leaving no time for replacements. It mostly hasn't been used since last summer's IBR trip. Bob and Rose can expect a bit of business in about 3 weeks' time!

Excluding CCS supplies, we'll each be carrying a maximum of around 14 kg, including two days' food, which should be quite comfy, but we do average 1000 metres ascent each day on our 328 km (205 mile) route. That's if we don't have to resort to our 'Foul Weather Alternative', which given the current state of the weather looks quite likely. CCS may of course be available at obscure and secret locations across Scotland, but as we will be lingering in the west and probably behind most people, we are not advertising any particular supply points. [We may get to eat it all ourselves!!!]

We'll be blogging our way across Scotland (of course) but the 'phone signal will rarely be strong enough to enable images to be transmitted, so they'll be added later. Some days there may be no signal, so bear with us - we'll be doing our best.

Good luck to any readers who are also doing the Challenge. Bon voyage, and see you in Montrose, if not before.

Next posting
Back to Index

Looks a great route and lots nice summits. Wildcamp at NO 020 790 is nice. My best pitch on the 07 Challenge was just down near the river bend there. Have a great time and I will be reading all about it :)

Thanks for that, Martin. As usual our proposed wild camping spots are planned just from the map, so it's encouraging to know that at least one of them should be in a good spot.
We'll try to keep you informed, and hope to see you on next year's Challenge.

You've got a plate!
Southern softies....

Other than that, the rouet would be far too bumpy for an old frt Northerner type ruffti tuffti bloke wot likes a spot of CSS (hint)

We need a plate each, or Nallo Lady would scoff from the troff while I am lost in the world of nod?
To be fair, though, we've left the chopping board behind this year (you're right, everything about us is very soft, especially our southern frankfurters)!

Enjoy your walk. One day we may do the TGO. But we catch up with you about your trip during the year.
Colin & Helen

Really looking forward to your reports, have an excellent trip.
Louise

Good luck to you two as well, see you on the ice (wrong words used there) but you know what I mean. Cheers

Have a great trip! Not to much atrocious weather and above all: Enjoy the nature!
Looking forward to your on-trip postings and of course whatever is already planned (I bet) later on in the year continuing the IBR...

Good luck to you both - Have a splendid time. See you in Montrose! I shall let you know how the whisky is if there is a signal up in Coire Lair!