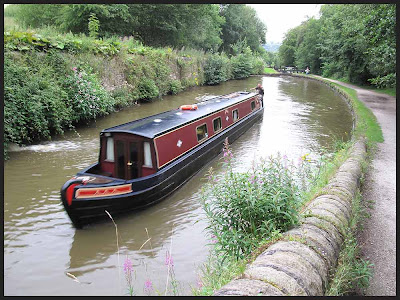 Tonight we met Andrew and Graham at the Midland in Marple Bridge, for a favourite short walk of mine, reported on previously on 20 March 2008. Doesn't time fly!

After a swift half of Landlord's we strolled up to the Peak Forest Canal via an overgrown path at the rear of the tennis club. Even at 8 pm the canal was busy - if not well lit, as you can see from the blurred image, with canal boats feverishly trying to negotiate the long system of 16 locks before nightfall, albeit there was a full moon tonight.

After all the recent rain, the place was positively verdant, with ragwort sprouting at will, and great banks of Himalayan Balsam - a plant ubiquitous to river banks at this time of year, introduced like Rhododendron from deepest Asia and now flourishing at the expense of our native species. 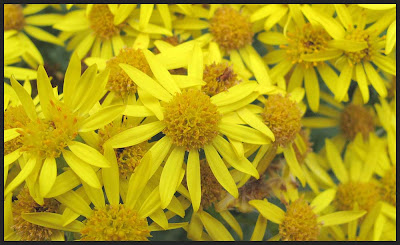 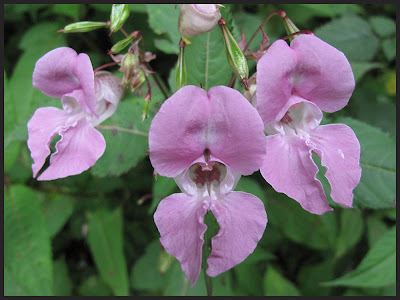 We wandered slowly down the towpath to reach the Aquaduct, opened in 1800 as home to the canal some 100 feet above the River Goyt. An impressive feat of engineering. Tonight we rather surprised some kayakers on the Goyt by returning their echoey shouts into the dusk.
Beyond the aquaduct we dropped down to the river, under the arches, and along the farm path that rejoins the Goyt by a small sewage farm. A few dog walkers were still about despite the late hour.

Emerging at Compstall we strolled past the George and turned right down the lane to Brabyns Park. On my last visit the bridge over the River Goyt had been closed for restoration, barring entry to the park at this point. It's a cast iron structure built in 1813 (34 years after Telford's iconic bridge over the River Severn at Coalbrookdale). It was the only one built by Salford Iron works, and is the only surviving bridge of its type in the north west of England.

We admired the handiwork of the restorers, whilst regretting that the cottage beside the bridge is now unoccupied and boarded up. 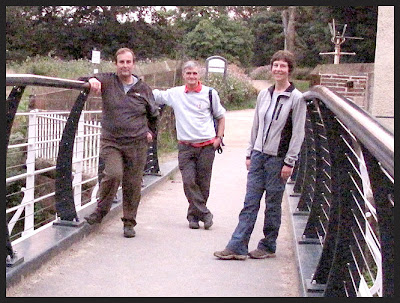 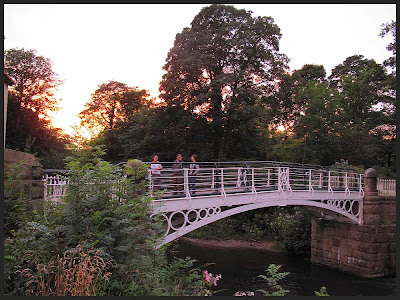 By now the sun had departed, so we ambled on through Brabyns Park for more refreshment at the Midland.

A very pleasant evening stroll - 5 km in an amiable hour and a half.

All are welcome on these short excursions - see here for details.
Posted by Phreerunner at 22:15