On a cool, dry, calm day, this bike ride was an ideal choice of activity.  It’s a shame it was cloudy, but you can’t have everything.

Roman Lakes is a good place to start this activity – a half hour drive finds us in this quiet spot with free parking, a drinks kiosk and toilets.  There’s plenty of space to gather the cycling gear from the car boot, and to change into clean clothes afterwards if it’s muddy.

I’ve produced a summary of the ‘E4’ route in the past, and recorded it here, so there’s no map or route description within this posting.*

Soon after starting out I met a large group of guided walkers, perhaps from some sort of institution, emerging from here: 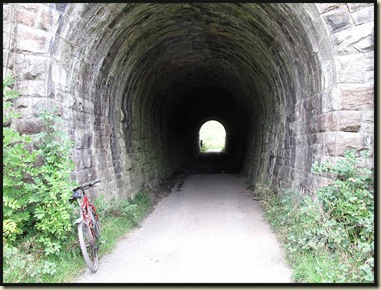 Perhaps there was light for them at the end of the tunnel!

I would hope that there is light at the end of the tunnel for this sad sight, which should be an attractive project for someone. 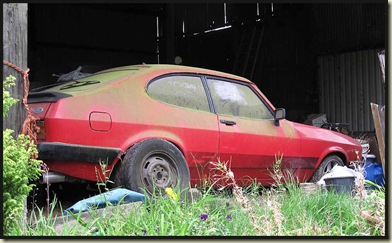 Whizzing past huge banks of Himalayan Balsam along the route, near a large dovecote in the centre of an ornamental lake, I soon came to a canal that despite its reddish brown colour is in fine fettle after some renovation work in the late C20 and even as recently as 2003 – the Peak Forest Canal.  Pleasure cruisers were phutting up and down the section I rode along today before dropping down into New Mills. 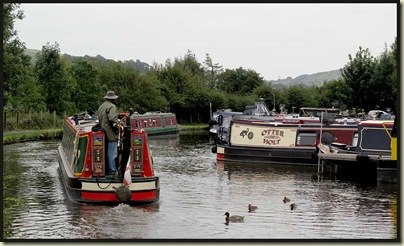 I stopped here, by the River Goyt, surrounded by industrial archaeology, for refreshments. 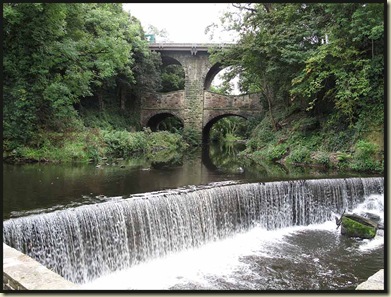 Returning to the saddle, disorientatation set in and I headed off in the wrong direction.  Either I’m very dim, or the geography of New Mills is quite intricate.  Possibly both, but I did have a déjà vu feeling from the other day when I thought the Bridgewater Canal should have been in view!  After fumbling around for ages, I eventually returned to the picnic benches and set off in the opposite direction, soon reaching the distinctive and attractive Millennium Walkway. 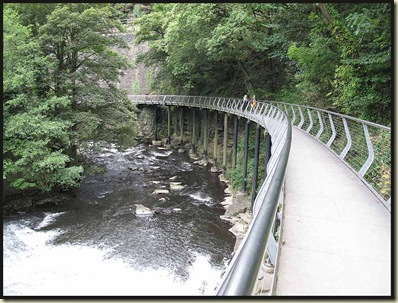 This little diversion perhaps provides the key to my speedo showing that I’d travelled two miles further than expected on this ride!

Some steep but straightforward climbing brought me eventually to The Fox Inn at Brook Bottom.  Sadly it was closed, for a new roof and other repairs. 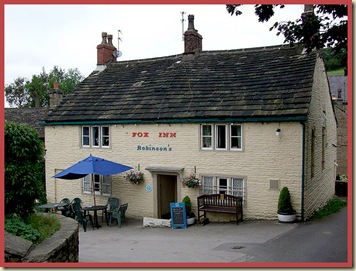 But today….I nearly had to pretend to delete the following image when the workmen and their boss (in the foreground) noticed my high visibility yellow top and thought I was a Health and Safety man checking up on them. 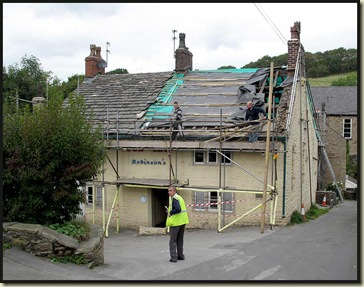 If so, I pleaded, why was I taking pictures like this? 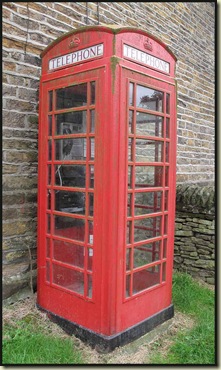 They let me go, satisfied as to my insanity.

It’s a lovely ride back to Roman Lakes from here, high above the valley, with good views towards the skyscrapers of Manchester.

Past the golf course and on down the rough stony track to Roman Lakes, this excellent finish to the ride is over slightly technical ground that’s hard (for me) to descend quickly, but is easy enough at a slow pace.

* One of the most visited outdoor blogs – Alan Sloman’s – comments here on the fact that it only actually describes one route (albeit a long one) in any great detail.  That in itself will attract many visits from prospective ‘LEJOGers’, but Alan’s subsequent postings do not make a big deal of describing routes or gear.  That’s the beauty of Alan’s postings.  You never know what’s coming next.  I think he enjoys blogging as a form of therapy, and I’m sure he gains much pleasure from knowing that his writing is enjoyed by many others, including some professional writers.

My own efforts, as previously mentioned, are very much an indulgence, and whilst mainly outdoors related may cover any topic I consider worthy of interest, so it’s a bonus to me that anyone other than my mother and sometimes my trip companions should be inclined to visit this site.

However, I do enjoy detailing the various routes of the trips I describe, and it’s an added pleasure when people discover these for themselves and provide feedback.

So whilst I get far fewer visitors than Alan, like his LEJOG postings my route descriptions have proved to be a useful resource for some visitors.

Your wonderful blog is a joy to read Martin. I for one appreciate the effort you put in and the descriptions of the routes.

Martin - I love coming here - your blog is a labour of love and I get so jealous that you are out and about almost every day. On top of that you live up in the frozen tundra of the north and so have beautiful walks and bike rides on your doorstep.

Thank you, gents. I don't plan to stop, Alan; your forensic touch may have lost its sparkle today!
BTW - I've enjoyed catching up with both your own entries - sadly little time to make comments I'm afraid.
Martin, did you watch BBC4 on Sir Hugh Munro tonight? It confirms he was a pedant who would constantly update his list to incorporate more up to date data. His list was the 538 Munros and Tops; the abbreviated list that most people 'tick' is just the mountains - originally devised by Rev A E Robertson as a manoeuvre to beat Munro to the finish!

I did not watch the BBC4 on Sir Hugh Munro Martin. I don't doubt he updated his information. But he set the list. With out any other guideline like 500ft drop on all sides his list should stand. He made the Angel of the peak a top. So to promote it years later makes no sense. A E Robertson is still the first to do a round. Who was first to do the tops as well ?

So, Martin, you are happy with Sgurr Dearg being a 'mountain' and the Inn Pin being a Top?
That's how Munro had them, and accordingly, A E Robertson never went up the Inn Pin.
Personally (as you know) I'm happy to let the SMC/Munro Society make whatever changes they feel appropriate - after all, it is really an SMC list - they got a member, Sir Hugh, to prepare it for them, and since its first compilation it has been revised by the SMC a number of times. Sir Hugh was working on the first revision up to his death. It's all part of the Fun!

I just watched it on I player. Good program and lots lovely hills to see. The Inn Pin story was interesting. But my argument is this. How did Munro decide?. Well we don't fully know, it was his decision based it seems on a bit of research and a barometer. Seems some were in and other out. Angel of the Peak is 4000ft plus. Hard to miss that.

Yes it is the SMC list and good luck to them. Then they have new club claiming their own list now with the Munro Society. Just kicked a Munro out of their club list. Each to there own I say. Me I just like maps and planning my own walks. No list to guide me is fine. If others wish to bag that is fine with me. I wonder if Munro left the Inn Pin as it was too hard to do at night since he did most of them that way (daft if you ask me) and Robertson agreed ?.

My point is that Munro was always receptive to new information, and being a pedant would have been happy with revisions in the interest of accuracy, in particular regarding the 3000 ft definition. I doubt he did the Cuillin ridge at night as the risk of upsetting gamekeepers up there probably wasn't too great during the daytime!

Personally, whilst I'm not an ardent 'bagger' myself, I have friends who are - I follow them around from time to time and I tick things off, so the lists have certainly got me to interesting (or not!) places I may not otherwise have visited.

Martin since 1891 there have been around many tops promoted or demoted, or just deleted. I would think in 2009 with modern technology they might get it sorted once and for all.

Then there is the point: "so the lists have certainly got me to interesting (or not!) places I may not otherwise have visited" A very good point and one in defence of the Munro game that I like. They are wonderful hills and let us not forget that.

Agreed!
But that still leaves the Tops vs Mountains issue. Some of my bagging friends have insisted on doing all the Tops as part of their Munro round. I admire them, but they do mainly live in Scotland.

"(or not)" = some are less wonderful than others, especially when you are with someone who ticks Marilyns - some of which are a little elusive.