On the road again - as Phil celebrated a day on the open road (see here) with Diana and Miss W, I enjoyed another largely off road pedal from Roman Lakes.

The 10.5 mile route to Rowarth and Mellor is described in the Roman Lakes booklet as ‘a generally dryish route taking in some good off road sections both up and down’, and that’s exactly what it was like today.  There’s a route description here, and in the direction described I found a need to dismount for a total of only around 20 metres.  Experts wouldn’t need to get off at all.

The summer is drawing to a close, but today it was hanging on – overcast, dry, calm and cool – but not cool enough to require more than the one layer, even up at 400 metres in the Peak District.

Passing this wood, I got the feeling that the flowering plants were now spent and that the next bout of colour, probably imminent, would be from the change in leaf colours from their present dull greens. 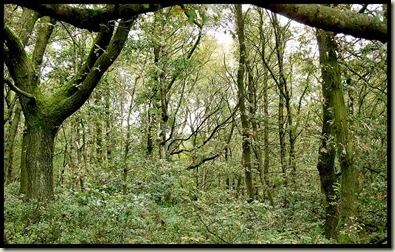 The view across New Mills towards Shining Tor was only just worthy of pressing the shutter – I find it hard enough to take a reasonable picture at the best of times, let alone in dull conditions like these! 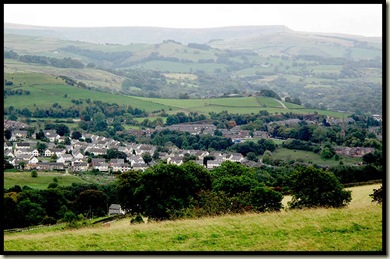 The paths were deserted today, apart from the two trail bikers I met coming up a narrow, rocky, restricted byway (clearly signed as restricted to all vehicles including trail bikes).  This chap fell off in front of me and a debate ensued as to whether he should really be there at all, let alone spread right across the path.  I think I was winning the argument until his mate returned and the two of them saw me off by chucking rocks towards me. 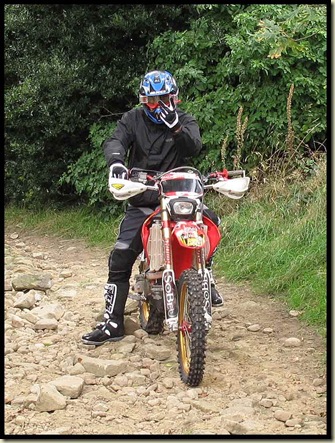 The fleshpots of Rowarth – notably the Little Mill Inn – were nearby, providing ample opportunity to take a break and regain my composure for the pleasurable run up to Mellor and back down a mixture of quiet roads and green lanes to Roman Lakes. 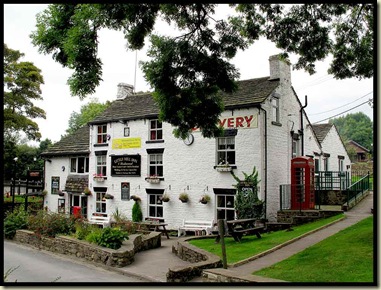 The route is shown below for those who haven’t bothered to click on the route description link above.  The 10 miles includes around 500 metres of ascent and took me about an hour and a half. 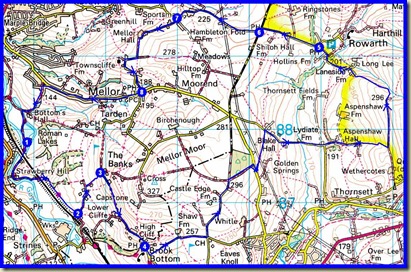 Such behaviour by irresponsible motorcyclists gives ALL motorcyclists a bad name. There are enough green lanes out there for us all to enjoy.

I hope the incident didn't spoil your ride on such a lovely route too much.

Did the gentleman have a numberplate? If so - did you take it?

Report the bastard to the police. And give them the photo to help them identify the yob.

Hello JJ - welcome back from The Timperley Triangle!
Thanks for the comments, gents:
No, it didn't spoil the ride - I've learnt how to avoid getting too stressed...
The gentlemen did have number plates, Alan, and their resort to chucking rocks was their way of preventing me from getting close enough to record them - they weren't meant to maim me. The whole episode was quite amusing in its way, especially when the gent in the photo accused me of intimidating him.
Without the numbers, I don't think it's worth reporting the incident, though I did sent the photo and a comment to the chairman of the Trail Riders Fellowship, who provided the following speedy response:

"I was sorry to hear of this distasteful encounter, you are quite correct in your assertion that one incident such as this can undo a lifetime's effort to engender tolerance and understanding. Whilst the Restricted Byway status is not necessarily prejudicial of higher rights, there is no excuse for violent or aggressive behaviour. Our recommendation in this situation is always the same, involve the police, providing as much detail as possible - this is exactly what we advise our members when faced with shotgun wielding farmers etc.
Although I find it hard to believe that they are members of our organisation (we have about 10% of active trail riders), I have copied in our Rights of Way and IT Officers so they can make further enquiries. We can also bring this to other forums outside the TRF in the hope that someone may recognise the culprits and peer pressure may modify their behaviour.
Once again you have my sympathies and I assure you this matter will receive our best attention."

I'm content to leave it at that, but next time I'll be quicker with the camera!

Stoned by bikers - another reason to wear a helmet, then ;-)

Glad it didn't spoil your day. Here in Suffolk it's the 4WD brigade - fat overweight idiots in fat overweight cars. Last winter it was most satisfying to come across an abandoned Range Rover on a closed byway, firmly stuck, and later on its former occupants plodding through their own churned up muck and looking very cold, wet & forlorn.

It warmed my heart to see their misery. Schadenfreude - you can't beat it!

may a thousand nails puncture their tyres! Ignorant swine. I'd be tempted to take a few caltrops to scatter at an opportune moment next time! :)

Nice story, Phil.
Not sure about the nails, bpb (thanks for 'following' BTW)- other mountain bikers may not appreciate that, though at this time of year it's bad enough with the hedge trimmings - bramble and hawthorn.